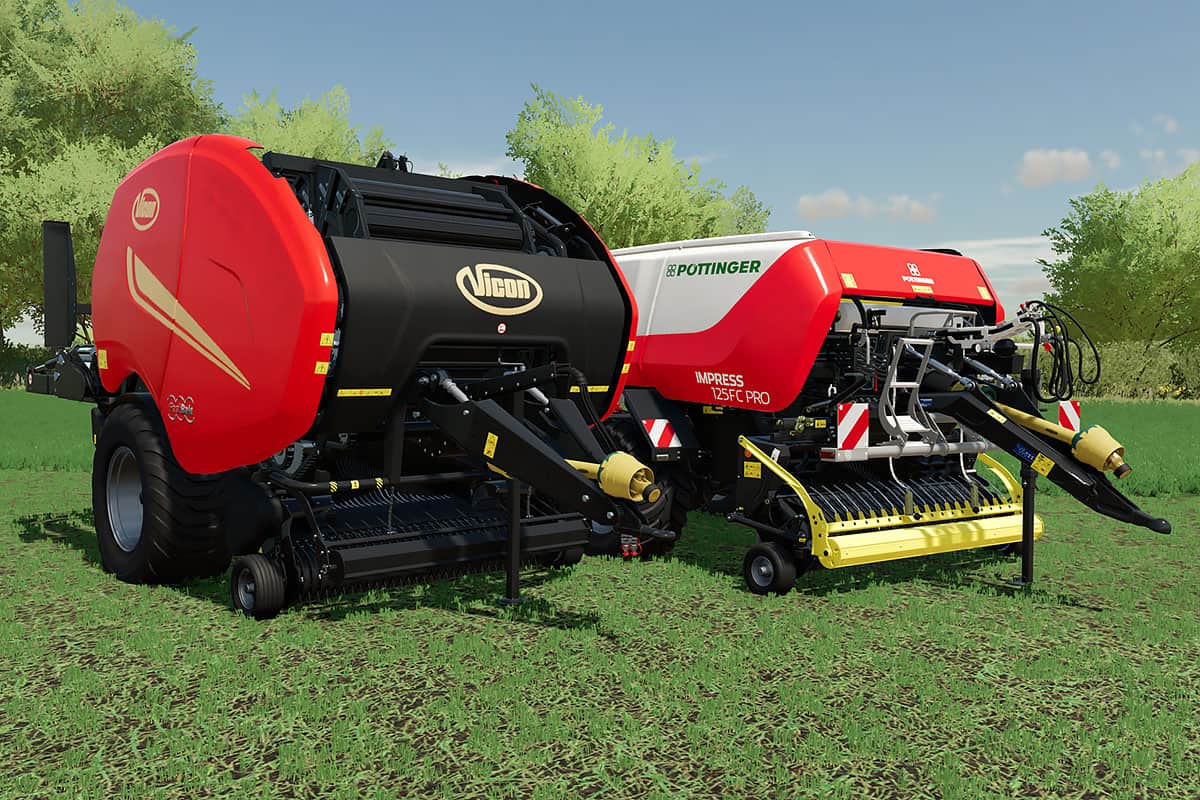 Balers play an essential part in many situations in Farming Simulator 22 (FS22.) Here are the FS22 baler mods I like the most, both square balers and round balers.

The large Pöttinger Impress 125 FC Pro round baler was part of the Alpine Farming DLC for FS19. Now, it’s available for free as a mod for FS22.

The baler presses grass, hay, and straw into round bales before wrapping them automatically. This makes it a great and efficient tool for making round bales of silage.

The bales from this Pöttinger baler have a diameter of 125 centimeters.

The best thing about this baler is that you can equip the end wrapper with a bale-turner.

During unloading, the bale-turner flips the bales, forcing them to land on the flat side. The benefit? Your bales won’t roll away, never to be seen again.

The Vicon FastBale/Kverneland FastBale round baler and the integrated wrapper were among the tools you could get if you bought the Kverneland and Vicon Equipment DLC for FS19. In FS22, however, they’re free for everyone as a mod.

I write both Vicon and Kverneland because you can equip the baler with one of the two brand’s logos in the shop. Vicon is a brand owned by Kverneland btw.

Esthetically, the baler is a piece of 3D modeling brilliance. It looks so good! It works fantastic, creating round bales before automatically wrapping them into silage bales.

If you’ve ever made round bales in any Farming Simulator game, you probably know that you have to stop your tractor each time you need to unload.

Not with the FastBaler. It’s designed to keep on collecting grass and straw while pushing the bale to the wrapper. No stops are needed (yay!)

It’s possibly my mild OCD, but I have problems leaving chunks of grass or straw behind in the fields. The base game balers don’t pick up all of it well.

That’s why this mod is so great.

With this genius baling pack, you get most of the base game balers with front-mounted Lizard R90 rakes.

These base game balers have the rakes:

The rakes, or windrower as someone calls it, extend the baler’s working width exceptionally: From about 3 meters, 10 feet to 10.3 meters, 34 feet.

In other words, you’ll save a lot of time (and fuel) hooking these modified balers to your tractor.

And before you ask… Yes, the Nadal R90 exists in the real world. It’s manufactured by the Spanish company CN Nadal, which has nothing to do with the tennis player.

This is a converted and modified version of the Kuhn LSB 1290 D large square baler I’m sure many of you used in FS19. The FS22 version offers much more, like two other branded versions.

Here are the balers you get when you download this mod:

There are several reasons why three different brands offer the same baler model.

I think it’s fantastic that the modder has incorporated all of this in the mod. You can style your baler in all matching colors and brands inside the shop.

Speaking of the shop, there are some wheel configurations available too.

My favorite feature, however, is the operating speed. These balers can press bales at 20 kilometers per hour, 12 miles per hour.

I also like that we can paint the balers in colors that make them seem used. The colors are a bit faded. There are also choices for brand logos; newer and older versions are available.

Want more John Deere balers in FS22? I hear you, and I have great news for you. Here’s a baler pack that contains one EU and one US baler:

They are practically the same baler, but there are visible differences. The North American version has the almost legendary warning triangle mounted to the rear.

Also, the EU pickup drum is yellow, while the North American version is John Deere green all the way.

Both balers can have double axle or single axle wheel configurations. Besides that, there’s not much to configure, except for adding a license plate.

You might remember these baler mods from earlier FS games. However, they have never looked as good and sounded as great as the FS22 versions.

The Class Rollant 455 RC is an awesome rework of the Claas Uniwrap baler that came with the game on launch.

The modder has removed the wrapper. This makes the baler cheaper in the shop and more suitable for hay and straw baling.

Don’t be alarmed if you can’t find an option to change the bale size with the Rollant. It only creates bales in one size, like the base game’s Uniwrap model.

There are a few in-shop buying options for the baler:

I think it’s a significant modification of the base game’s Claas baler. The changes make it more affordable and useful.

I’ve seen various versions of this mod in previous Farming Simulator games. Believe me when I say it has never looked as good.

The textures have been updated, and extra cables and animations have been added. And the baler has a new set of sound effects, which sounds fantastic.

There’s one tiny drawback: You can’t change the size of the bales it makes. You’re stuck with one dimension (5,000 liters.) However, this shouldn’t be a problem for most players.

Inside the shop, you can change the rim’s color, and that’s it. Keep it simple!

Here’s a great pack of Deutz-Fahr balers. The mod includes one square baler and one round baler:

Do you get a feeling that you’ve seen these balers before? The reason might be that the base game Kuhn balers (the SB 1290 iD and the VB 3190) look identical.

There’s a good reason for the likeness. Both the Kuhn and the Deutz-Fahr balers are built at the same factory in Geldrop, Netherlands. Kuhn bought the factory from Kverneland in 2008.

The Deutz-Fahr balers come with an option for variable bale sizes. The only shop options for both balers, besides license plates, are some wheel configurations.

The balers pack is great modmanship. They look fantastic and include many animated parts.

Want to make bales slightly more efficient? The Pöttinger Impress 125FC Pro AoiEdition is basically the same round baler as above. But there is a significant difference.

This version has a pre-chamber.

Okay, so what has that to do with anything, you might ask?

You can keep on baling without stopping to move the bale from the chamber to the wrapper. It works the same way as the Vicon and Kverneland Fastbale model below.

However, there is a trade-off. The maximum work speed is slightly lower compared to the Pöttinger above. But the total time spent in the fields creating bales is still shorter.

Yes, this is another Pöttinger pre-chamber round baler. Again, it allows you to keep on baling without having to stop for unloading.

This mod is based on the vanilla game’s 185VC. So yes, it can create bales up to 180 centimeters. Unfortunately, none of the AoiEdition balers have the bale flipping feature of the Impress 125FC at the #1 position.

Both the 185VC and the modified 125FC above are fantasy mods, kind of.

As far as I know, Pöttinger hasn’t yet started manufacturing real-world balers with capabilities similar to the Vicon and Kverneland Fastbale balers.

Although the New Holland BR 6090 round baler mod is a replica of one of the older New Holland balers, it looks all but worn out in FS22. It’s a mod I enjoy a lot.

This FS22 round baler is particularly good-looking behind one of the older tractor models in the game.

It has updated lights and attachable hoses and cables. It produces round bales 125 centimeters wide.

The New Holland baler doesn’t have an integrated wrapper. This isn’t a problem if you’re collecting straw with it, of course. However, if you’re going to use it to make silage bales from grass, you need to get a wrapper too.

A Quick Word About Bale Sizes

FS22 has introduced different bale sizes. Square bales, for example, can be anywhere from 120 centimeters to 240 centimeters long.

The bale loaders you get in the game aren’t exactly one size fits all. This makes the matter a bit more complicated. Most loaders will only pick up bales in some of the available sizes, not all of them.

Just have that in the back of your mind when you choose which baler mod to use. The size of the bales they produce must match the sizes the loader can handle. 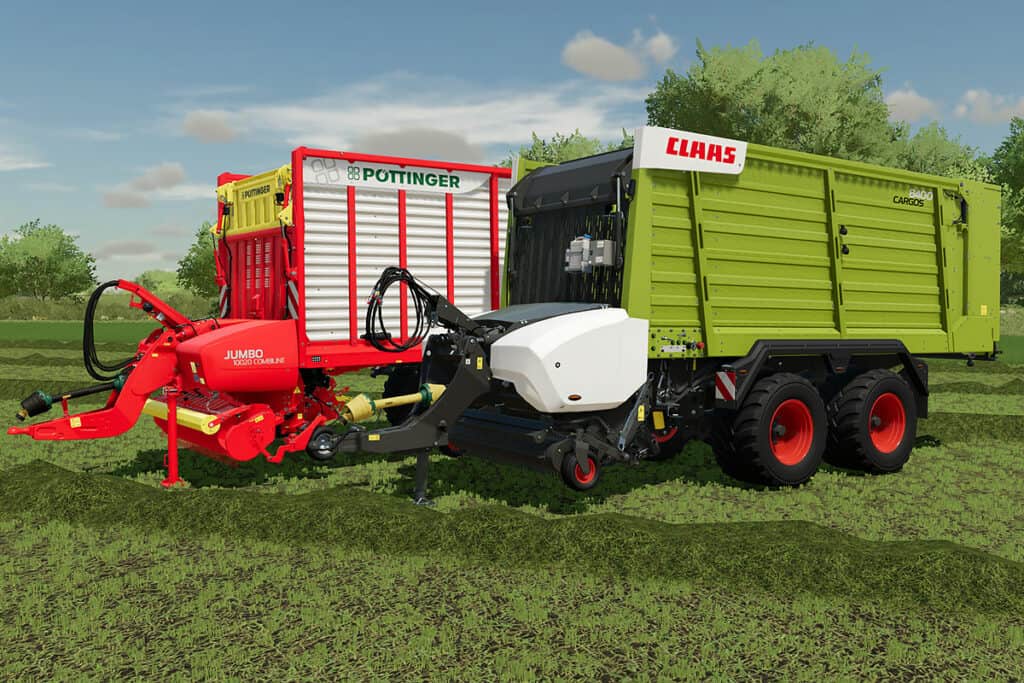