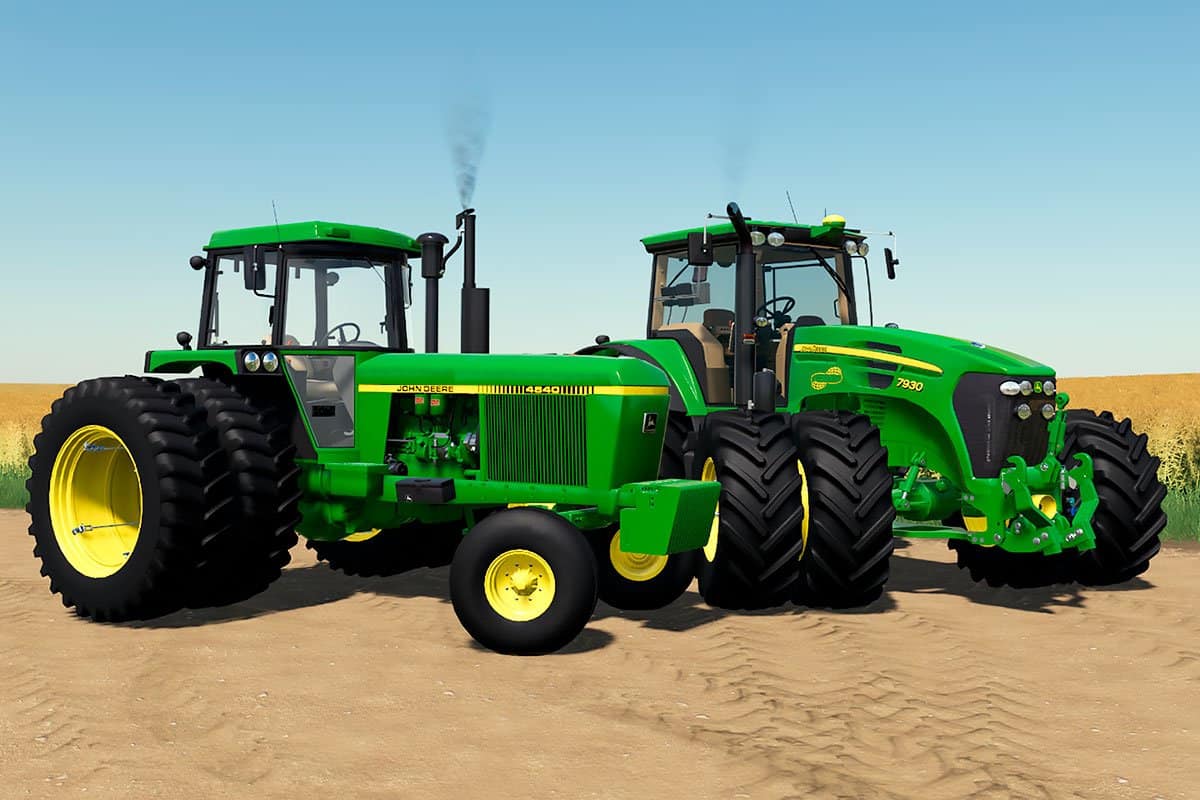 It’s time we look at the mod category with the most content: Farming Simulator 19 (FS19) John Deere Medium tractor mods. Here are our Top 15 picks:

John Deere made the 6010 Series between 1997 and 2002. Most models were built at the John Deere Mannheim factory in Germany. The 6010 tractors were among the first JD models to use electro-hydraulic front axle suspension, making driving on roads much more comfortable.

This 6010-mod is one of the best FS19 adoptions of the classic JD tractors. It has a lot of shop options and maxes out at 185 horsepower. All windows and doors can be controlled with the Simple IC script.

This is the best, Americanized version of Giants Software’s original 6R model, which made its Farm Sim debut in FS19. Americanized meaning it has been reworked to look like something you’ll see on US and Canadian farms.

The flashers on this mod are foldable. You can control the left door and the rear window with your mouse or a controller. Just take it slow in tight turns. It tends to roll over.

Here’s another version of the 6010 Series. This one has actually made it to the official Farming Simulator modhub. It’s almost identical to the 6010 above but has fewer options in the shop. Both models share the same custom engine audio. It’s good but not breathtaking.

PC and Mac farmers can use the Simple IC script for opening and closing the doors, the rear window, and the front sunshade.

This is one of the best-looking mods on this list. It actually belongs in the Small Tractors category but has enough power output to be classified at the Medium level. Most about this mod is great, except for the engine audio. We’ve heard better, to be honest.

Many of the tractor’s parts work with Simple IC, like doors, the sunroof, windows, the warning signs, and the foldable steering column. The Simple IC is buyable in the shop, meaning the tractor will also work with Courseplay without hiccups.

The FS19 version looks delightfully good. It’s not the most feature-rich John Deere tractor mod out there but has some excellent shop options, like a lot of different wheel combos.

This mod adds the three most powerful models in the 7010 series tractor range to your game. Most of the models in that series were built in John Deere’s Waterloo factory in the United States. The 7010 tractors were among the first models to use the Triple Link Suspension (TLS,) which added better grip, faster speeds in the fields, and overall better driving comfort.

The FS19 version looks terrific. It comes with superb, custom engine audio and a decent list of customizable features.

This is one of the most complete tractor mods in FS19. It adds a total of four different versions of the iconic John Deere 4055 series to the game. Inside the shop, you’ll find both EU and US versions of it. It’s divided further into 2WD and 4WD models. Tractors in the 4055 series are still in high demand. A 2WD 4055, in excellent condition, was sold for $45,000 at a farm auction not many years ago.

The models look marvelous, and the custom sounds produced by the engines are spectacular. A lot of the interior is animated, but the rather unique cabin door is not, unfortunately.

Another John Deere that works with Simple IC on PC and Mac. It’ll let you use a mouse or a controller to open or close stuff like doors and windows. The mod also has quite a list of customizable features and custom-made audio that sounds more than decent.

The mod has the same right-hand control console as Giants Software’s original 6M series, which matches the real-world. The 6030 tractors share many interior parts with the 6M series models.

The FS19 version of the 6020 series JDs looks much the same as the 6030 series mod above, but there are also differences. The hood differs slightly between the two model ranges, also the dashboards are different. The 6030 models are also somewhat larger compared to the smaller brother.

The funny thing though, is that you get more power with this 6020 mod. The 6030 series maxes out at 185 horsepower, while the chip tuned 6920 S offers a total of 220 horsepower. Hurray! for chip-tuned tractors!

Mouse- or controller-managed doors and windows, and fantastic custom audio, are other cool features you get with this mod.

When John Deere introduced the world to the new 40 series tractors in 1977, it nicknamed the tractor range “The New Iron Horses.” The great thing about this particular FS19 mod is that all original models in the series are included.

The mod has a nice chunk of shop options, fantastic custom audio, several animations, and options for making the tractors look either European or American. It even comes with a protective cage for all you forestry fans.

This is one of the most customizable tractor mods in the history of tractors in a simulator game. There are so many things you can add, remove, tweak. We encourage you to have a look for yourself what’s possible.

We won’t waste your time. Let’s just boil it down to this: If you can’t find a configuration you like with this mod, you won’t ever find one. We should also mention that you can use this John Deere with the Simple IC mod. With it, you can control the doors, the windows, and the warnings signs, for example.

This mod takes the original 6M tractors that came with FS19 many steps further. You see, real-world 6Ms can be bought on different frame sizes. This is also how the mod works. It divides the 6M series into three: Small frame, medium frame, and large frame versions with visible differences regarding the size.

The frame size you choose determines the engine size. The smallest models have the least power, while the large frame models have the most. All in all, a fantastic accomplishment by the modder, making the FS19 John Deere 6M series even more realistic.

The original 6R series has gotten the same treatment as the 6M series above. Here too, you’ll find three versions of the models in the 6R range: small, medium, and large. It works the same way as the 6Ms: The larger the frame, the more powerful engine you can buy.

The mod also has an impressive set of features that you can add, remove, or tweak, like several options for the colors of the body and the rims.

Here’s a tremendous FS19 version of all the models in the 7030 small-frame series. The mod adds the Premium level to all models, even though it was only the 7430 and the 7530 that were true Premium versions originally.

The animations are what stick out the most. You can open both doors and the rear window with a mouse or a controller. The mod does also have custom audio that isn’t too shabby. Note that you’ll find two versions of this mod in the shop: One with gearshift sounds, the other one with standard audio.

The best things about this mod are how it sounds and how the exterior looks. It doesn’t look too bad on the inside. Still, it’s evident that some parts are due for remodeling and texture updates (what looked great in FS2013 doesn’t necessarily have the same stunning visual impact in FS19…)

We also miss more animations. Most mods on this list have doors and windows that open and close, or, at least, moving throttles and brake pedals. This mod has none of that, unfortunately.