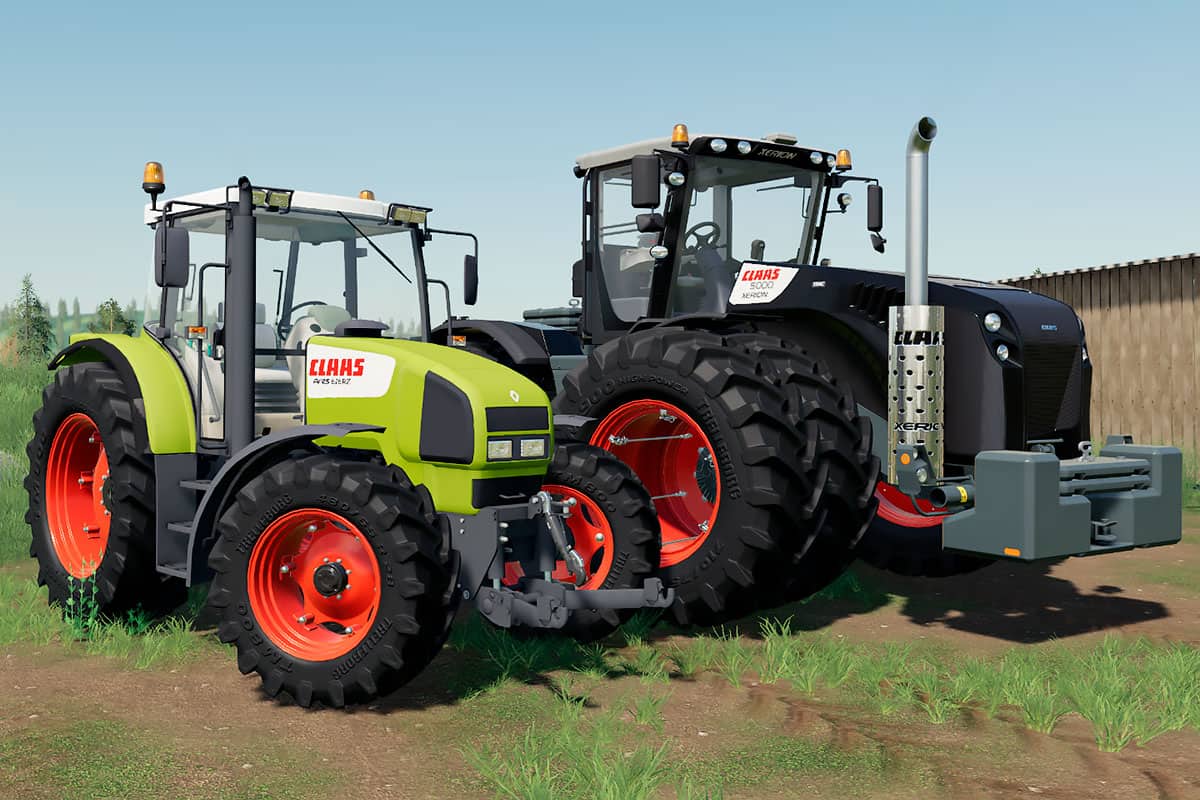 The Claas DLC for Farming Simulator 19 (FS19), released by Giants in 2019, is really, really good. It contains five tractor models that set a new standard for the game’s model realism. The good news is that you don’t need the DLC to have great Claas tractors on your digital farm. A lot of free mods are available. Here are our top picks for FS19 Claas tractor mods.

Once upon a time, French car manufacturer Renault used to make tractors. In 2003, Claas rode in on its green horse from Germany, asking to buy the agricultural division. Renault said yes and agreed to dress its models in Claas green, red, and white, including the Renault Atles tractors.

The Claas Atles FS19 version has many cool features, like a lot of animated parts. You can open doors and windows and even control the height of the rear hitch. There’s also lots of stuff happening inside the cab while driving. Levers and pedals are moving just as you would expect. Nice! Sure, the model would benefit from modeling and texture updates, but that’s easy to live with. Nostalgia beats finesse!

This mod depicts an older version of the Xerion 4000 and 5000 series tractors, Claas’ most powerful pulling machines. Some might find the placement of the exhaust pipe a bit awkward. Still, there’s a good reason for it: The original cab could be placed in one of three possible positions, including the Saddle Trac option. To make room for all that cab movement, Claas decided to put the pipe in that not-so-common position.

The mod gives you more options than most FS19 tractors. You can select steering mode (front-wheel steering, crab steering, and all-wheel steering.) You can also change the driving direction by turning the cab 180°. Just know that you must buy this option in the shop.

We just have to add this: This is a fantastic mod. The modeling and textures are almost as good as Giants’ Claas models. And the sounds? We actually prefer the modder’s audio.

The modder Smety is the King of Claas mods. His version of the Axion 900 is almost as good as Giants’ original model (you have to remember that Smety builds his models from scratch.) Even though Giants’ Axion 900 has a few more details and slightly better audio, we still root for the underdog. This mod is an example of exceptional craftsmanship!

We just wonder if the Smety-model has been washed at too high of a temperature? It’s noticeable smaller than Giants’ version.

When Giants Software released the Claas DLC (aka FS19 Platinum), the company didn’t forget about those who didn’t want to pay extra for driving Claas tractors in FS19. The Claas Axion Terra Trac is a free mod for everyone to enjoy. You don’t have to buy the DLC to get it.

It’s not a feature-rich mod. The only thing you can customize is the engine. But it comes with a feature that prompted a collective ‘Wow!’ from many players: It’s one of the first Farm Sim models with real 3D tracks! It’s also armed with stunning motor audio and a level of model details that bode well for future Farming Simulator games.

Don’t wanna pay $20 for the Platinum Expansion to drive the Axion 800? No problem! This mod lets you enter the second most powerful Axion for free.

Well, we need to tell you it’s not as detailed as Giants’ DLC version. It’s also an older version of the Axion 800 Series tractor range. But it has some features that the paid version doesn’t give you: The ability to open doors, windows, and the roof hatch with a mouse or a controller. And free beats paying $20, right?

The Wow factor is very much alive with this mod. You have several choices for steering (regular, crab, and all-wheel), optional rear weights, and the choice to buy a driving direction switch in the shop. If you’re farming on PC and Mac, you can also use the Xerion 3000 with the Simple IC script.

Another trip down memory lane, given that you were around in 2003, witnessed how Renault tractor models morphed into Claas colors. The Ares model range was included in the friendly takeover deal between Renault and Claas. And before you ask… Yes, many French farmers were happy about Claas taking over their national treasure.

The FS19 Claas Ares mod shares many design elements with the Atles above. It lets you control doors and windows with your mouse. You can even remove the sides of the hood to get a closer look at the engine. It’s not the most detailed model, but that’s not a problem for hardcore fans of French agricultural memorabilia.