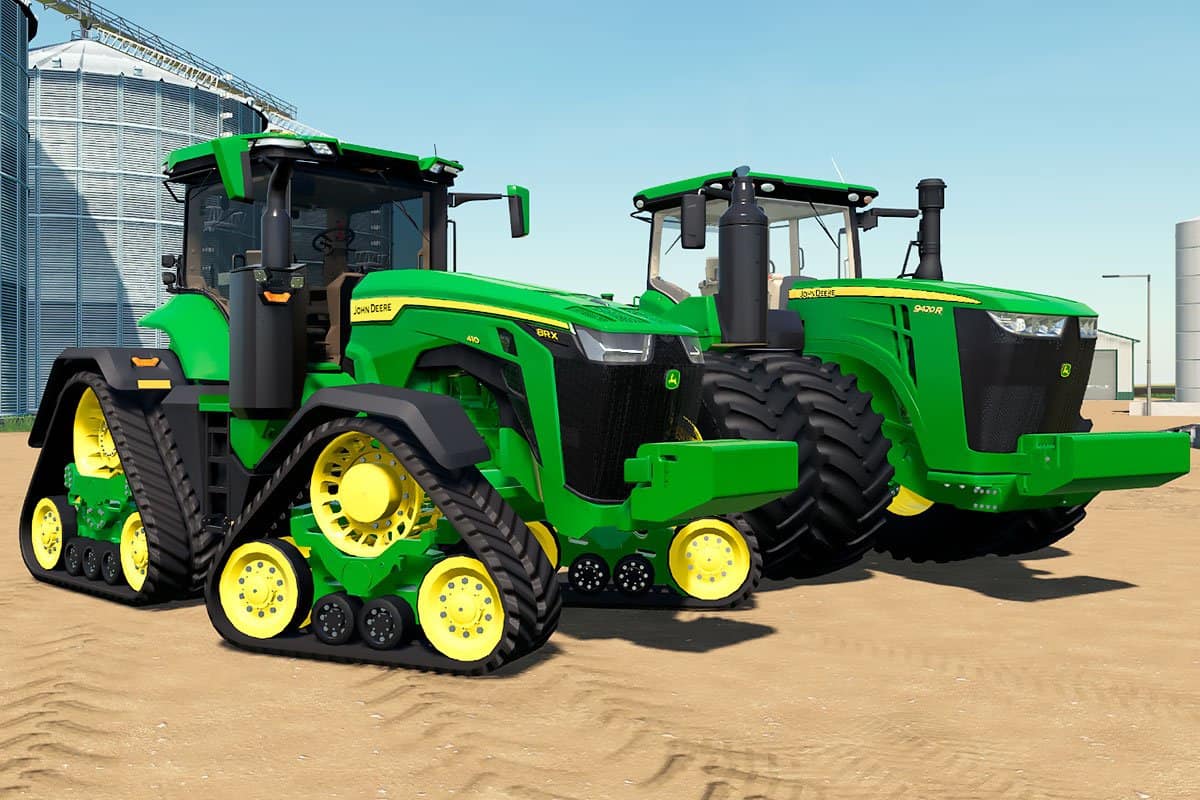 There are more large John Deere tractors in Farming Simulator 19 (FS19) than in any other farm sim. But which ones are the best? We’ve created this Top 10 list with the best FS19 John Deere large tractor mods to help you find the greatest.

Here you have one of the most customizable John Deere tractor mods in FS19. Most of the exterior can be tweaked to your liking. You’ll also find several options for what to put inside the cab. On top of that, the model looks brilliant, while the custom motor sounds are amazing.

The left door and rear window can be opened and closed, also on the non-IC version. You can even pop the hood to take a closer look at the engine.

This version of the 8020 series tractors works with the Simple IC mod. In the shop, you’ll find two tractors. One with Simple IC controls, the other one without. The reason is that the script doesn’t always play nice with Courseplay (CP.) If you want to use the tractor with CP, buy the non-Simple IC version.

This mod does also contain two versions: One with Simple IC and one without. The latter guarantees an error-free experience with Courseplay. The non-IC version doesn’t lack animations, though. You can still open one of the doors, the rear window, and the hood.

It’s almost the same model as the 8020 above, but there are also visible differences. Parts of the exterior, for example, look different. When it comes to quality, though, it’s identical to the 8020. It’s a prime example of how beautiful mods in FS19 can be.

Do you need a powerful John Deere in Farming Simulator 19 that can turn on a dime? Then, you should definitely try this mod. It’s all about power and maneuverability.

The model is a rebuild of Giants Software’s original 8R, ensuring great looks and excellent motor audio. It comes with several options for the widths of the tracks and the axle tracks. The mod also lets you choose between a North American and a European look.

Here’s another rebuild of the Giants’ original 8R model. This one is clearly aimed at fans of US and Canadian farming. It adds a couple of shop options geared towards the North American market, like a rock box on the front instead of weights.

It’s also one of the very few 8Rs that can be equipped with a front loader. Custom Design has created the John Deere H480 that is the best fit for this large tractor.

This is an excellent FS19 replica of the two most powerful models in the John Deere 8060 series. All models started rolling out of the John Deere Waterloo factory (USA) in 1989. The lower-powered 8560 and 8760 got John Deere engines, while the 8960 is one of few 4WD John Deeres with a 6-cylinder Cummins engine under the hood (thanks, BigTractorPower.)

The FS19 version of the 8060 series tractors looks perfect. They also have custom audio for the engines that sounds pretty spectacular. You can open the left door. There are some cool animations of the interior. A large number of possible wheel configurations will surely keep you occupied for a while.

If raw and brutal power is your thing, you might wanna check out this magnificent FS19 version of the 9R series tractors. It’s a tremendous power pack that literally screams ‘ain’t no equipment heavy enough!’

The mod comes with beefy motor sounds, produced by the PSS and Cummins engines, a nice chunk of animations, and an impressive amount of wheel options in the shop—many enough to make wheel-nerds cry tears of joy. Oh, it’s the US version of the 9R we write about here, but there is also an EU version of it in the shop.

Why settle for the wheeled 9R when you can add the tracked 9RX to your farm too. Yes, it’s basically the 9R with tracks. Still, since traction actually is a thing in FS19, you might be better off with the 9RX when hauling really heavy stuff.

Don’t think that you are left behind on options if you choose the RX. You can customize your heart out regarding the tracks. There are four different track sizes and three-axle tracks to play around with, plus tons of other options. EU or the US? Doesn’t matter. You get options for both.

Here’s an Americanized version of Giants Software’s original John Deere 8R model. To make it more American (or Canadian, if you like), the blinkers have been replaced with proper replacements. There’s also a big, fat warning triangle on the rear of the cabin.

This mod started out using Firestone wheels. Because of that, Giants couldn’t grant it access to the console modhub due to licensing issues. The Solution? Rubbing out the problematic logo while rebranding the wheels to Lizard. The Michelin options could stay on, though. Oh, it’s also one of few large tractor mods that can have front loaders. Your best FL option is the John Deere H480 we mention above.

Thanks to the modding gods (Custom Modding), it’s possible to equip your farm with the full 9R range in FS19. We’ve already drooled over the 9R and the 9RX. Now, we have stars in our eyes because of the spectacular 9RT. Sure, it doesn’t quite match the brutally powerful bigger brothers, but 628 horsepower should still be enough to get you out of most mud holes.

The mod hands you a couple of options for the width of the tracks and the axle tracks. Suppose you’re one of those players worrying about authenticity, like there’s no place for European equipment on American soil (or vice versa). In that case, you’ll be happy to learn that the mod has options for both EU and US/Canadian specs.

The FS19 2020 versions of the 7R and the full range of 8R tractors testify how important modders are for the Farming Simulator games. Giants couldn’t, of course, make the newest John Deere models for a game that launched two years before the models were revealed. Thankfully SiiD Modding could add them to the game as mods a couple of years later.

And whoa! What a mod it has become! It lets you drive all the new John Deere tractors in all their glory. The shop options vary from one model to another. Below, we’ve listed the common ones. Don’t want the US versions? No problem. There’s also a set of EU versions available on the modhub.