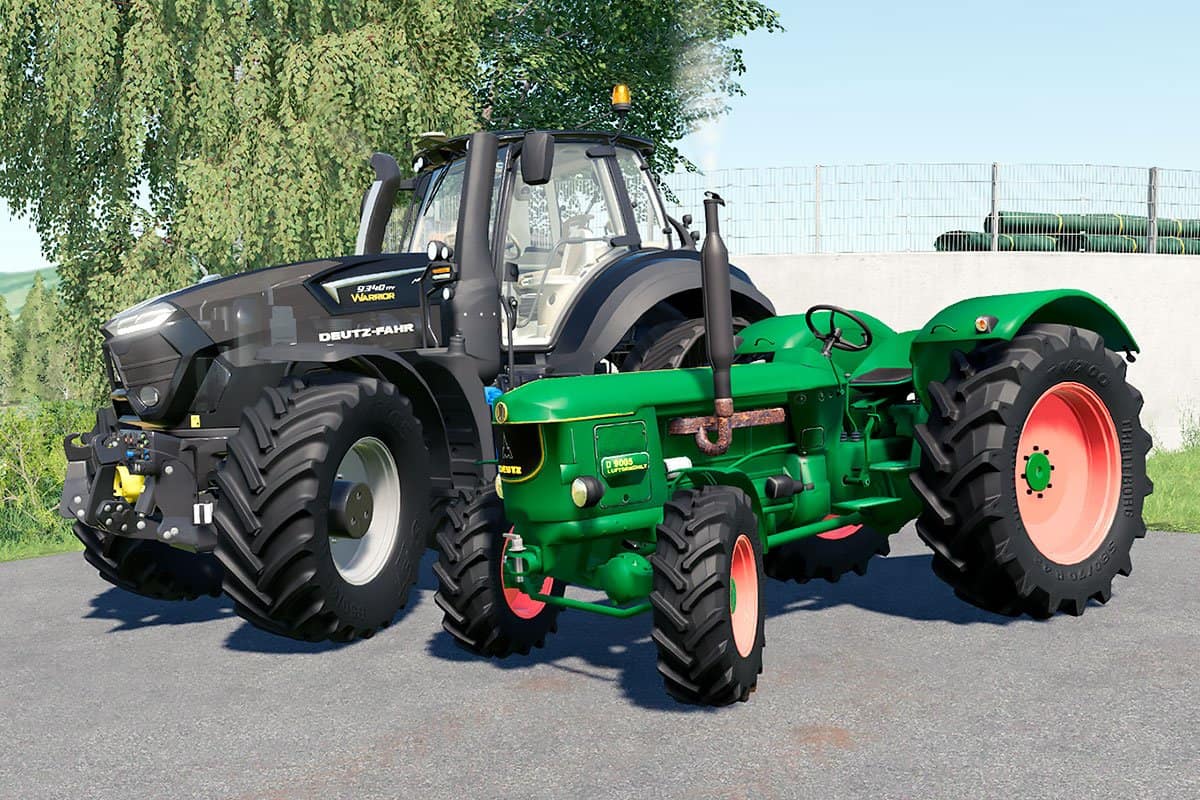 This time, we have played around with the many Farming Simulator 19 (FS19) Deutz-Fahr tractor mods available from different modders. There’s a lot of crap out there, to be honest, but also some very impressive alternatives. Here are our top 10 favorites:

This version of the Deutz-Fahr 7 TTV Series adds some fantastic features to the game. Perhaps the Warrior design options that add the Warrior logo to the hood and a matching, gold-plated stripe are most striking.

The mod comes with the best interior of any FS19 7 Series mods and some of the beefiest engine sounds produced by any FS19 tractor.

Here’s one of Deutz-Fahr’s many classic tractor models as an FS19 mod: The Agrotron MK3 Series from the early 2000s. The model range got a performance upgrade around 2005, which lead to a renaming of the 128 to 150.

Both the old and the new engine models are represented in this mod.

This is another impressive version of the 7 Series TTV tractor. The mod itself is based on the 7-version above. The modder has added even more goodies to it, like a new hood, more color options, and the Universal Passenger script.

The tractor’s engine audio is the same as the already mentioned 7 TTV above, which means this version also sounds totally brutal!

If classic tractors are your thing, you must check out this stunning piece of equipment. It’s a terrific FS19 adaption of the iconic Deutz-Fahr D 9005 vintage model. It was produced between 1966 and 1967. Back then, it was considered a big tractor, thanks to the 85-horsepower engine.

Yes, it’s old, but it comes with some really nice features in the shop.

There are not many Deutz-Fahr 6 Series mods for FS19. That’s why we’re happy that one of the existing ones is so good; it deserves a spot on this list of great Deutz-Fahr mods for Farming Simulator 19.

Sure, it would benefit from even more customization options. Still, the looks, the textures, and the physics are enough to make us really happy.

The Deutz Fahr Agrotron MK3 Series was the third generation of Agrotron tractors. Deutz-Fahr introduced a wide range of innovations with the new models, like the electronic motor control (EMC,) which reduced both consumption and emissions.

The FS19 version includes two variants of the model, one with 4 cylinders, the other one with 6 cylinders. The shop options are the same for both versions.

This is easily the best version of Deutz-Fahr’s largest tractor in FS19. One of many cool features is how it’s possible to add tracks to the tractor. You can have tracks on the rear axle only or on both axles at the same time.

We love how our favorite tractors from older farm sim games get remastered for FS19. The Deutz AgroStar 6.61 was our go-to small tractor in FS2015. Now, we’re enjoying the updated version in FS19.

So much has happened to the model since we saw it first more than six years ago. The FS19 mod is a complete overhaul with the addition of tons of new features.

It’s not the most feature-rich version of the 9 Series, but it has some tricks up its sleeve, making it an exciting mod. You can, for example, change the engine sounds to a more powerful version.

It’s also the only, as far as we know, Deutz-Fahr mod in FS19 that lets you put floaters (massive wheels) on it.

This is an exciting pack of tractor mods. It includes the Same Fortis, the Lamborghini Spark, and the Deutz-Fahr Agrotron. Why? Because they are practically the same tractor. Again, why? Because Lamborghini (the farming division,) Same, and Deutz-Fahr all are brands owned by the same organization: SAME Deutz-Fahr (SDF.)

The Agrotron model you get with this pack is newer than the other versions on this list. It also has more powerful engine options but not as many shop options.