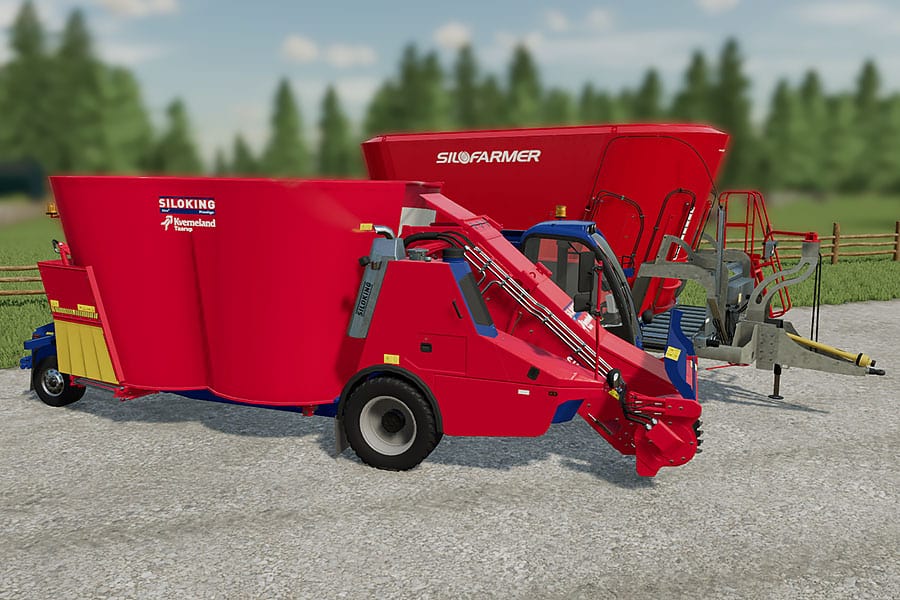 Cows in Farming Simulator 22 loves Total Mixed Ration or TMR if you like. Their milk production will skyrocket once they are fed a mix of hay, straw, silage, and mineral feed.

Trailed mixer wagons or self-propelled mixers make blending the ingredients easy and fun. Here are the FS22 TMR mixer mods that I recommend:

The Silofarmer Tambora 30 is one of the largest TMR mixers in FS22. It has room for 30,000 liters of cow feed.

I think it’s also one of the coolest-looking tools you can add to your farm. The 3D model looks astonishing.

The mixer has three discharge options:

If you’re eager after spending some cash inside the shop on upgrades and extras, I have to disappoint you. The only item on the shopping menu is a license plate.

However, the key function of TMR mixers is to keep the cows happy, don’t you agree? With one as big as this, you’ll keep a lot of cows satisfied with just one load.

If you get this to your FS22 farm, you’re actually independent of other vehicles or tools. The milling head will eat through heaps of hay, straw, and silage like there’s no tomorrow.

Yes, it can chop bales too:

The milling knives will even tear through wrapped silage bales without leaving traces of the plastic inside the mixer. Magic!

This mixer has some shop options:

The Siloking mod is another win for the ARM-Team modders. It’s great to have more models to choose from for self-propelled TMR mixers.

The Anderson Group A950 is another gigantic TMR mixer. It’s trailed, and you need a nice chunk of horses under your tractor’s hood to get it inside the barn.

There are no extras or add-ons in the shop, except for the option to put a license plate on the mixer.

With almost all Anderson models now available in FS22, you have one of the most comprehensive collections of dairy and cattle farm tools at your disposal.

This mixer is an excellent match for larger farms. It can feed several hundred animals in one go.

Do you have several hundred cows to feed? Then the Lucas G Spirmix 300 Tapis is one of the best TMR mixers for your farm.

This massive mixer can hold 30,000 liters of total mixed ration. You need to have a lot of animals in your barn if you’re going to empty it in one round of feeding.

Other than being really big, this mixer also has some shop options:

One advantage of picking this one over the largest Anderson mixer, for example, is the power required to make it work. The yellow feeder is considerably less power hungry than its Canadian-made counterpart.

The Robert Evolumix 2-30P is part of the impressive Robert Straw pack for Farming Simulator 22. I don’t think I’ve ever seen a collection of cattle care mods as good as this one.

The trailed TMR mixer, for instance, comes with an impressive amount of unloading options:

With regards to customization, the Evolumix has more possibilities than other mods:

My favorite feature is the unloading pipe. It’s very flexible. You can move it quite a bit, both vertically and horizontally.

Another great feature is the fill level display visible from the left side of the mixer.

This is the largest feed mixer for FS22 at the moment. The massive Siloking TrailedLine System 1000+ 4535 has a capacity of a staggering 45,000 liters.

You can’t go much bigger if you have a lot of livestock to feed.

You can feed your cattle from both sides of the mixer. The conveyor can transport forage to the left or the right.

It does also have some stylish customization options:

The large Siloking mixer is a stunning piece of machinery. It was a fan favorite in FS19. I believe even more players will enjoy it in FS22.

Here’s the Schuitemaker Vertigo pack for Farming Simulator 22. They are some of the best trailed feed mixers I’ve ever seen.

The pack is made up of two TMR mixer wagons:

When you’re going to buy the mixers, you have a couple of choices:

It’s possible to choose the unloading direction. The mixer supports discharging to both the left and the right.

I think that MefiuFs (the modder) is one of the best modders for the Farming Simulator games. The Schuitemaker mixers make me more confident I’m right.

This is the Siloking TrailedLine Duo 1814 forage mixer from FS19. It has gotten a nice upgrade since the last game. The cables and hoses that span from the trailer to the tractor pulling it are most noticeable.

There isn’t much to configure in the shop, though. You can change the license plate, and that’s it.

Yes, this mixer also supports offloading to both the left and the right.

Sure, the feed mixer could have been equipped with more options. However, I think it’s great as it is. Hopefully, more goodies will be added in the future. A fill-level display would be great, for example.

The mod is a smaller version of the Faresin mixer released with the game. There are no shop options besides the possibility to add a license plate to the trailer.

It’s possible to feed your cows from both sides of the mixer. The conveyor will unload the TMR to the left or the right.

The mixer is a brilliant addition to small farms, especially if the small cattle barn has narrow access to the feeding area. 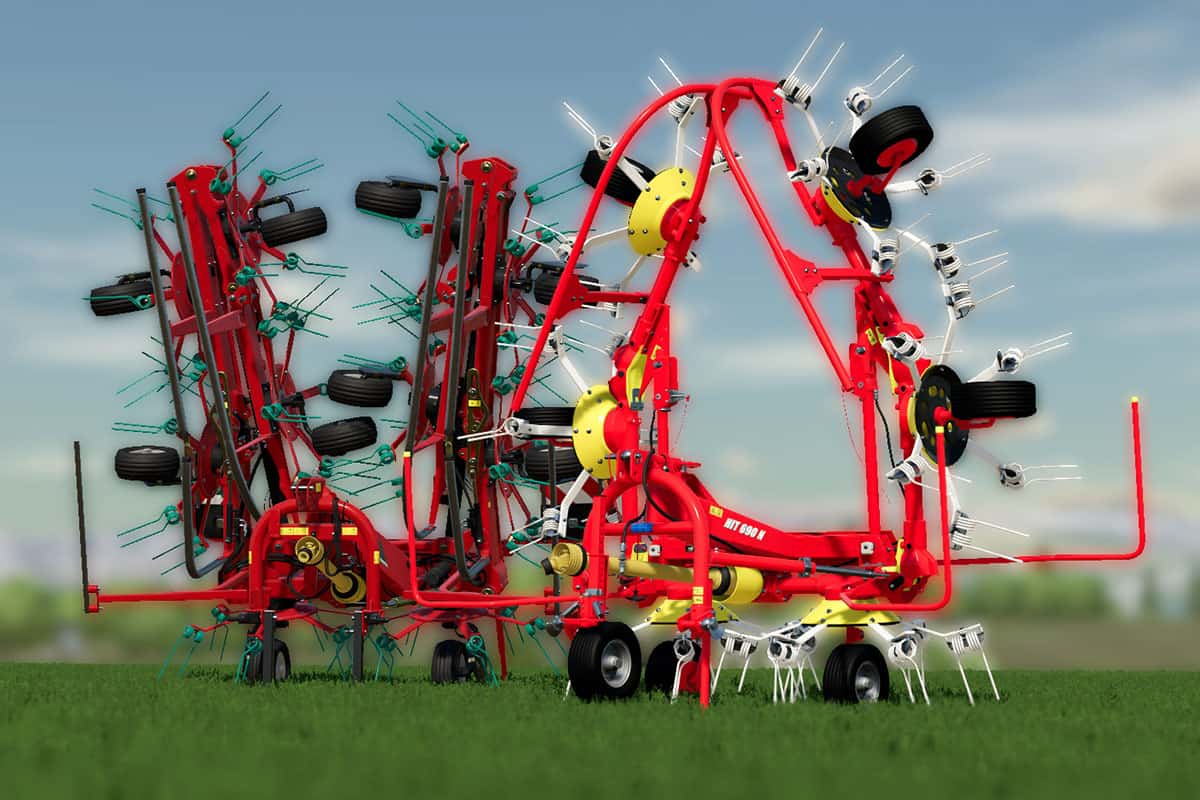 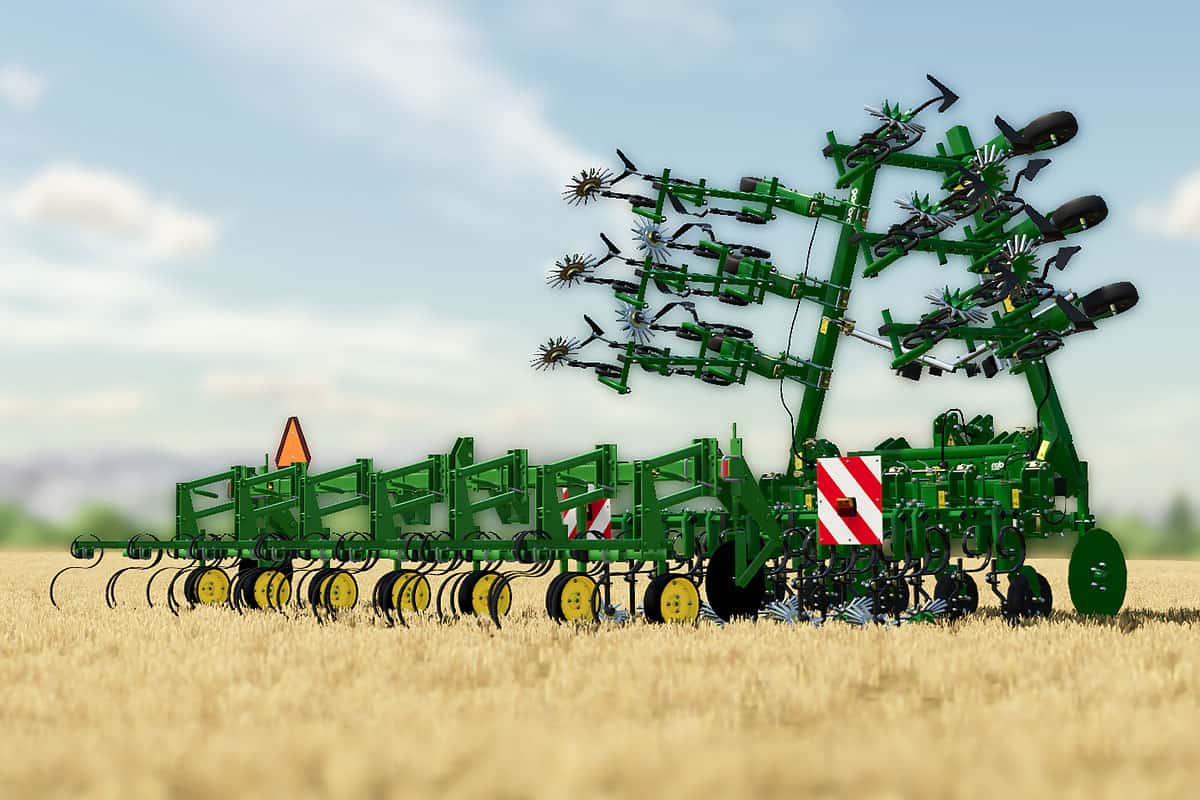 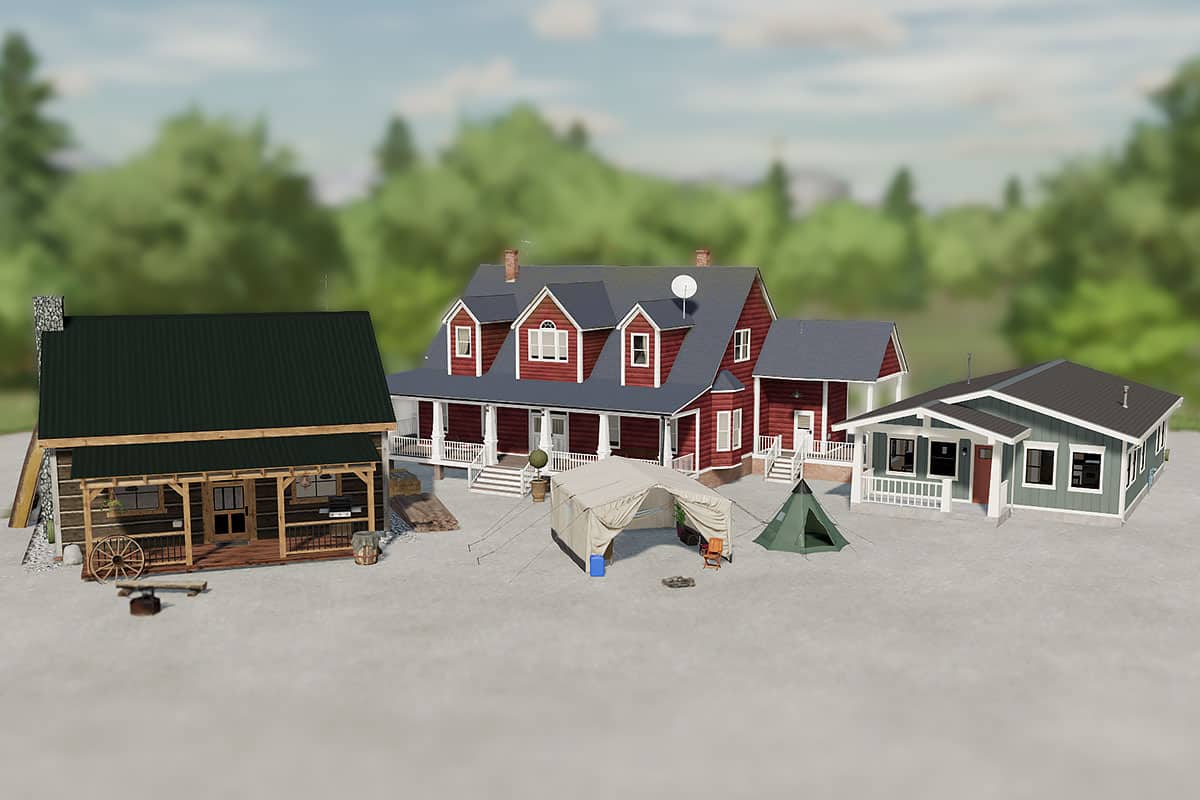