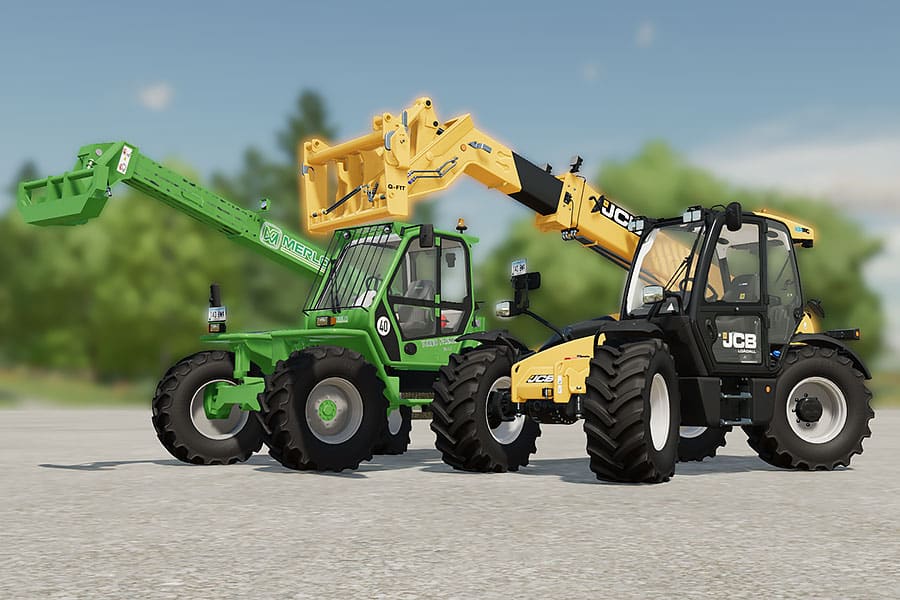 A telehandler, also known as a telescopic handler, a teleporter, a reach forklift, and a zoom boom, is an invaluable tool on many farms, also in Farming Simulator 22.

These vehicles share some of the forklift’s traits. However, thanks to the telescopic boom, they are more cranes than forklifts.

The biggest telehandlers are also capable of lifting and transporting seriously heavy loads. Here are some of the very best FS22 telehandler mods.

We start the show with the brilliant Merlo P41.7 Turbofarmer telehandler made by the Italian company Merlo.

The company is one of the largest telehandler manufacturers in the world, with more than 600 dealers worldwide. It has made zoom booms since 1981.

All the options make it one of the most versatile telehandlers in all of FS22. And few other telehandlers can reach as high as the Merlo.

The Merlo telehandler is also available on consoles. However, it’s called Lizard P41.7 Turbofarmer on Xboxes and PlayStations due to licensing restrictions.

For many, JCB is synonymous with telehandlers. Thanks to modders, we can put an extended version of one of the most popular JCB telehandler models to work in FS22: the JCB Agri Loadall.

The model is a modified version of the 541-70 Agri Pro that came with the game. The modded version has more details and noticeably more shop options.

Each engine model has a different gear system: Variable (CVT), 4-speed, or 6-speed.

It’s no wonder many players prefer this version over the base game’s JCB. It has so much more to offer.

I’m probably not the only one missing the Manitou MLA-T 533-145 V+ in the FS22 base game telehandler lineup.

It was an essential piece of machinery on my FS19 farms. Finally, it’s back, as a mod from Giants Software.

It doesn’t have much to show inside the shop; you can only change the wheels.

However, its main benefit, in my opinion, is how the driver is positioned relative to the boom.

Looking straight at the implement, say a bale fork, makes it easier to grab the bale when you’re looking at it from inside the cabin.

This Manitou is articulated. That means it has a slightly larger turn radius than most other telehandlers.

I needed time to get used to the different turn mechanism. However, as soon as I adapted, I appreciated the possibility of loading and unloading at an angle.

The Claas Scorpion 1033 FS22 mod is another rework of a base game vehicle. In all fairness, I must say that I’ve seen modded versions of original vehicles that add a lot more.

However, this version of the Scorpion is a player’s favorite. It has excellent reviews from almost FS22 farmers.

You won’t spend much time inside the shop with this one. You can change the wheels and colors and adjust the beacon light. That’s it.

Nonetheless, it’s good to have one of the original FS22 telehandlers with more options than the original.

Did you know that the Scorpion 1033 is produced by the German-Swiss manufacturer Liebherr? Since 2018, Liebherr has made both telehandlers and wheel loaders bearing the Claas colors and logos.

It’s a delightful little machine with enough power to handle most of the farm chores you throw at it.

This particular model showed up for the first time in a Farming Simulator game in FS17. Since then, the 3D model and the textures have been upgraded. Yes, the sound effects too.

The shopping menu consists of the following options:

My favorite feature of the JCB TM 320S is the placement of the driver’s seat. It’s positioned right behind the boom, making life easier for an in-cab player.

The Massey Ferguson 9407 S telehandler is one of the most feature-rich telehandlers in FS22. It has more options for customization than most of its counterparts.

Do you say you’ve seen the Massey Ferguson telehandler in an older FS game? You’re absolutely right. The same machine was in FS19.

Since then, both the 3D model and the textures have been updated. Yes, there are new sound effects too. All in all, it’s a brilliant conversion of an older model. It has been converted in a way all modifications should be done.