Sprayers do two things in Farming Simulator 22 (FS22): They add liquid fertilizer to your crops. They can also help protect the crop from weeds with herbicides.

There are a lot of sprayer mods out there. The range consists of mounted, trailed, and self-propelled sprayers.

Here are some of the best FS22 sprayer mods, no matter the category:

The awesome Horsch Leeb PT 350 is one of the best self-propelled sprayers I’ve used in any Farming Simulator game.

It’s one of 17 tools in the Horsch Pack mod converted for FS22. The modder responsible for the conversion, Rubberburner89, has done a phenomenal job.

Here are just some of the features:

Also, the sprayer runs through a whole lot of delightful sounds when the booms are unfolded and folded back again.

Add shop options like color pickers for most of the vehicle and several different wheel options, and you get one of the most valuable crops boosting, crop protecting vehicles so far.

The Kuhn Deltis 1302 MTA3 mounted sprayer makes another round in the farm sim universe. It first showed up as one of the tools included with the FS17 Kuhn DLC. In FS19, it was part of the base game lineup.

Indeed, it’s not the largest option nor the fastest. However, I often find mounted crops tools easier to handle when self-propelled versions are just too expensive.

I like how the modder ( madarHR) has included a rich sound template.

I also hope they are motivated to work more on the mod. It would be great if they could add the Kuhn PF1500 front tank, which was part of the FS19 setup. It added an extra 1,500 liters of liquid fertilizer or herbicide to the mix.

Here’s the massive and impressive Amazone UX11200 trailed boom sprayer. It’s one of the largest spraying tools in the world.

The operating speed is also noticeably faster than the base game sprayers, maxing out at 20 kilometers per hour, 12 miles per hour.

It does also come with a beefy list of shop options:

The under-leaf spraying bit doesn’t matter for the yield in the game, but it looks cool.

The Amazone sprayer has some issues. For instance, no sounds are playing during the folding animation.

Also, it tends to wobble quite noticeably when fully loaded with some tractors, less with others. However, the wobbling stops as soon as the trailer starts moving.

I’m not too bothered by the snags; it’s still a great tool, especially when I have many large fields to care for.

The New Holland SP400F is one of the longest-running self-propelled boom sprayers in the history of Farming Simulator games. It entered the base game in FS17, returned for more in FS19, and is now available as a mod in FS22.

Let’s look at the pros and cons, shall we?

Having said that, I think the modder has done a great job converting the New Holland sprayer. It looks great in the new game, especially some of the in-cab animations are really good.

This is a relatively quick FS22 conversion of the Amazone Pantera 4502 that Giants Software added as a mod in FS19. Nothing new has been added to the vehicle.

It’s still great to have it back, considering the massive boom width of 41 meters. The tank size isn’t too shabby either. It holds 8,500 liters of liquid fertilizer and herbicide.

If you want an uncomplicated sprayer, this might be for you.

The boom’s height related to the ground is adjustable. You can also extend the axle track manually with a mouse or a controller (it doesn’t happen automatically.)

I’m pretty enthusiastic about the Amazone Pantera, but I wish it had more lights. It’s not the best tool for nightly work because of missing work lights, nor does it have lights on the boom.

Mounted vs. Trailed vs. Self-Propelled

There are three types of sprayers in Farming Simulator 22. Here’s a short description of each category:

Mounted: Also known as 3-point hitch sprayers, meaning they’re mounted directly on the tractor. For the most, you’ll attach them to the rear 3-point hitch. Some come with an additional tank, usually mounted on the tractor’s front.

Trailed: This type is constructed as a trailer with its own set of wheels. A drawbar connects the trailer to a tractor pulling it.

Self-propelled: Sprayers in this category are vehicles on their own. They don’t need additional vehicles to get around. 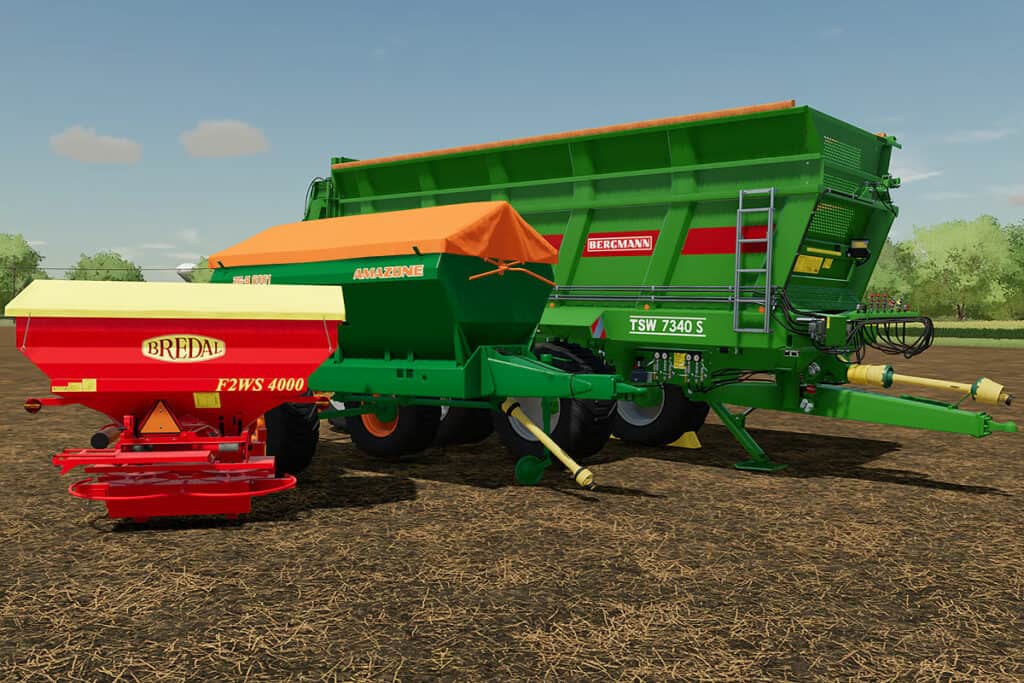 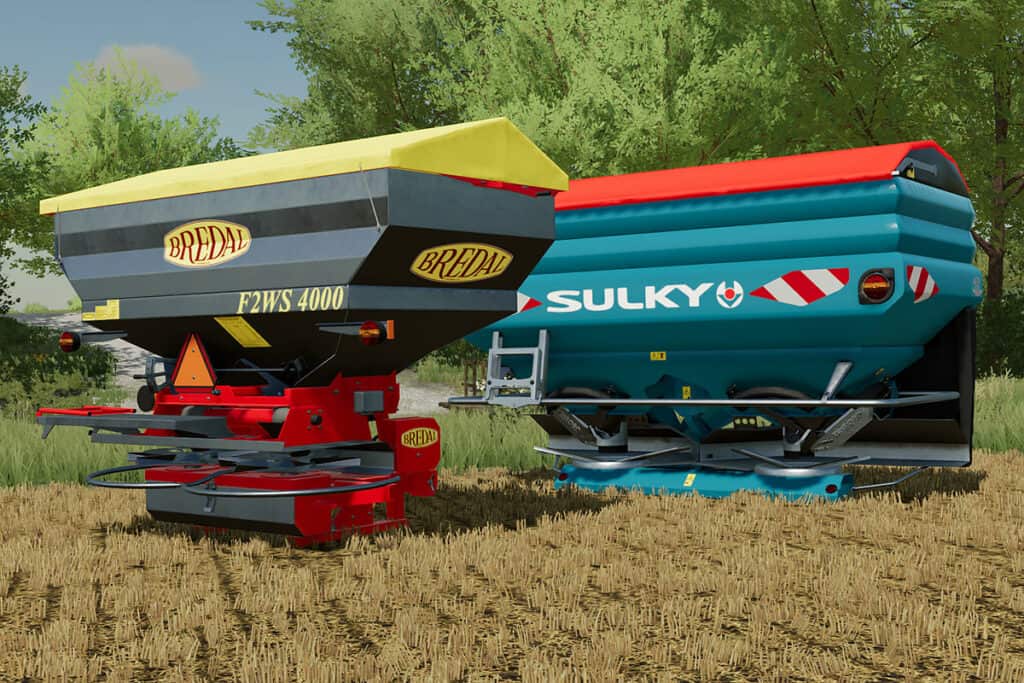 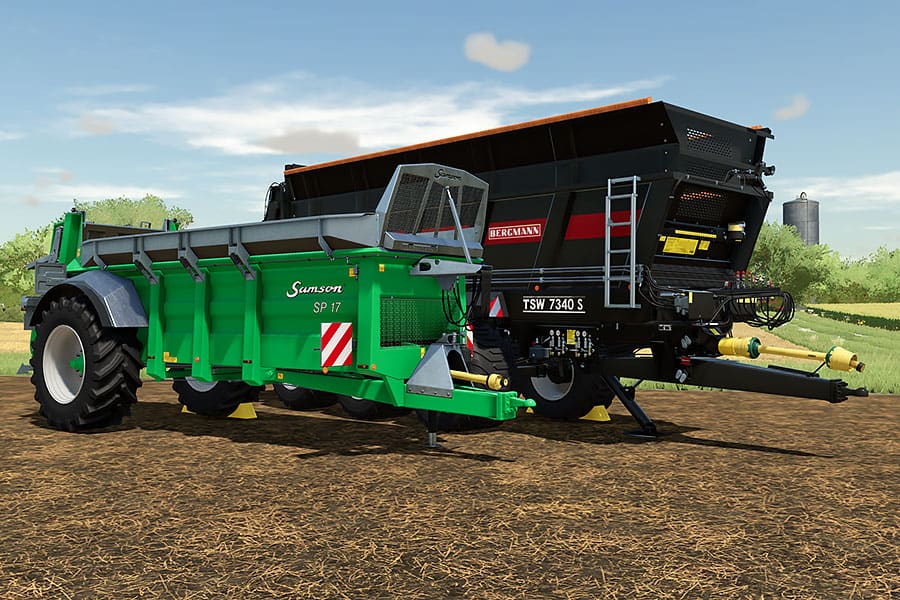 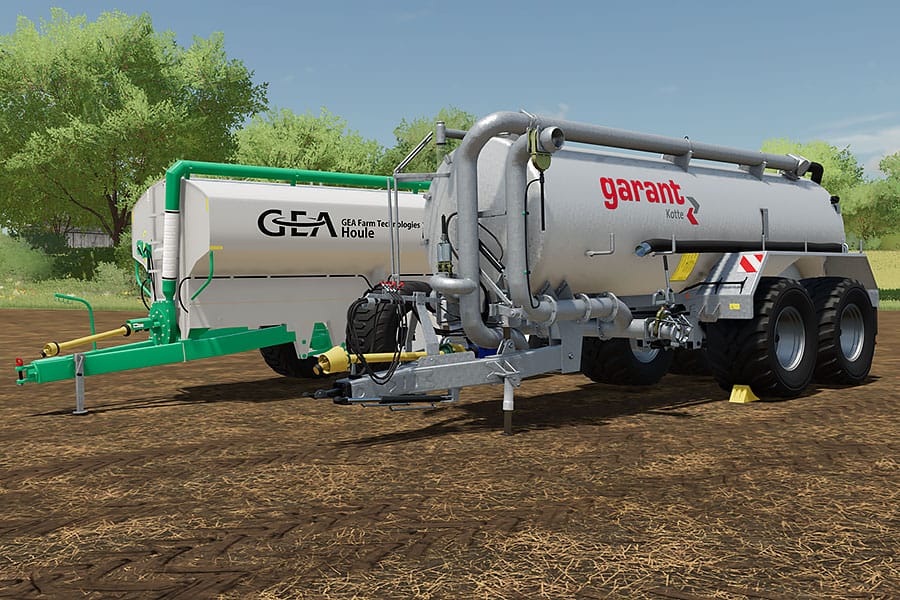