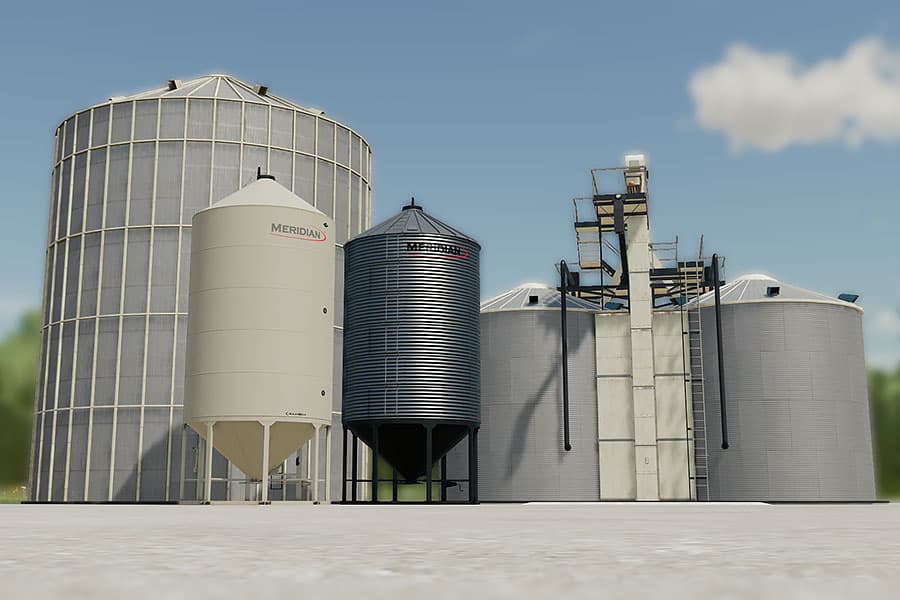 Silos in Farming Simulator 22 is a broad term. It covers anything from grain bins, silage pits, and bunker silos to hay lofts and large liquid manure tanks.

In other words, if you can store stuff inside it, it’s most likely categorized as a silo in FS22.

After Giants Software decided to do a full rollout of the build mode in Farming Simulator 19, silo mods have become an essential part of the game.

In FS22, you have more mods than ever at your disposal. Here are my favorite FS22 silos:

This is undoubtedly the best FS22 grain bins mod right now. It’s also the most complete collection of Meridian bins in the game.

You see, you don’t just get a couple of silos. The pack includes 32 bins in different shapes and sizes:

This pack of bins also does a lot to add more realism to the game:

The last point means that your best option is to use an auger to fill the bins. You’ll also need an unloading auger to empty them.

I’m so impressed with this pack of FS22 grain bins. They make building the farmyard of my dreams both challenging and exceptionally fun.

According to the modder, the silos utilize underground storage and above-ground bins. That explains why each object is so small relative to its impressive storage capacities.

My favorite setup is the medium-sized silo complex from the Elmcreek map. It had no function initially. Thanks to the modder, it now makes a great, well-functioning addition to most FS22 farms.

One significant benefit of the silos is that they can hold almost anything you want. You can even place bales on the unloading pit. An “invincible” bale chopper will disintegrate the bales.

What a great idea! The modder has taken one of the Hörmann sheds released with the game and put three bunker silos inside it.

In real-world farming, there are really no benefits of building a roof over silage pits or bunker silos, except the surrounding area gets cleaner. Indoor solutions produce less wastewater because of rain.

Nonetheless, it’s great that we can have indoor silage pits in FS22.

I also like the challenge that follows. Considering the overhead roof while compacting grass or chaff makes silage production more interesting, in my opinion.

The Farming Simulator 22 build mode is so fun! However, it comes with some cons. I build and build, forgetting that I also need space for crucial objects, like silo bins.

I can’t recall how often I’ve had to remove other buildings because I forgot to put down the bins first.

However, my favorite feature is how small the object is. It doesn’t grab much more of your farmyard’s space than a medium-sized oak tree.

The reason is, of course, that the crops and other commodities are stored underground.

I know it’s not entirely realistic. Underground storage cost too much to be viable in the real world. Then, there’s the risk of water or pollution entering the storage.

However, in FS22, it’s a great solution, especially when your farmyard is getting overcrowded by sheds, animal pens, and other buildings.

Believe it or not, I enjoy working with bunker silos and silage pits in Farming Simulator 22. I find the process of filling and compacting grass and chaff quite satisfying.

Sometimes, however, I want more straightforward solutions. Then I usually turn to these tower silos inspired by the Harvestore silage systems.

I’ve seen similar setups on real-life farms here in Scandinavia, but they are way more common on American and Canadian dairy farms. That’s why you can decorate the towers with the US or Canadian flag in FS22, I guess.

The silos are easy to operate:

The American Fermenting Silos for FS22 is made by the European modding team VertexDezign. The team has created many of the best mods for the Farming Simulator games.

I hope the team’s American silage solution means they will make more US and Canadian-themed mods in the future.

Not everything in life needs to be large. That’s also true for FS22 bins. I’ve already made several small farms in the game while wondering why most placeable bins are so darn big.

That’s why I’m such a big fan of the Small Silo Set mod by the modder TopAce888. All the bins suit my small-scale farming adventures perfectly.

This is what you get with this mod:

The pack also includes an extension bin of 500,000 liters.

I like these bins a lot. I love how the modder has differentiated the bins’ look and what they can store.

Are you tired of cleaning up the chaff in front of bunker silos in FS22? Then this is the mod for you.

This is another awesome mod from the modder TopAce888. I think this is one of the best bunker silo mods in any Farming Simulator game.

You can use the bunker silo as a standalone, drive-through silo. You can also add one of the walls, or the ramp, to one of the ends.

The ramp makes filling the bunker easier. The largest wall is excellent for creating a natural ramp.

Then, there’s the tip-free area. Just follow the instructions the game gives you, and you never have to clean up chaff outside the bunker again.

It’s a fantastic mod. The bunker, the walls, and the ramp look really good; the textures are great. I also give the mod 5 out of 5 for functionality.

Are you looking for great-looking slurry storage tanks for your farm in Farming Simulator 22? Then you should check out these two beauties.

If you download this mod, you’ll get two tanks:

And the 4-layers storage tank:

The tanks are standalone, meaning they won’t do the job as extensions for the liquid manure storage of animal pens. You must fill them manually, which only adds to the realism.

Both tanks work flawlessly in the game. It’s the look that I like the most. The texturing and modeling are top-notch.

The last version makes the tank look like the real-world counterparts you’ll often see on Scandinavian farms, especially in Denmark.

The capacity of each tank is 500,000 liters (500 m³.) I like that the tanks are somewhat scaled back. The reasonable size makes it much easier to place them on the ground.

The 3D modeling craftsmanship is fantastic. The tank models are well-made, and the textures are great. I especially like the dirty cover, making it look much more realistic.

NOTE: These tanks don’t work as extensions for animal pens. They are standalone storage tanks, meaning you have to fill them manually.