Some Farming Simulator 22 (FS22) trailers aren’t quite like others. They would have their own category if it were up to me: Silage trailers.

You see, trailers in this category won’t just accept anything. They can only be filled with grass, sugarcane, woodchips, straw, silage, hay, and chaff.

That’s why they are great companions for forage harvesters, for example.

Anyhoo… Here are some of the best FS22 silage trailer mods:

This is a brilliant silage trailer. It’s the Schuitemaker SIWA 240. The trailer is an older model. Schuitemaker made them somewhere around the beginning of the current millennia.

I like it because it’s reasonably priced. Also, it’s an excellent fit for smaller FS22 farms. Its max capacity is almost 50 m³. Still, it’s not so big that only the most powerful tractors can pull it.

If you’re ready to put up the money, this is what you can choose to pay extra for:

The first time I saw a SIWA 240 was in Farming Simulator 13. A lot has changed since then. The FS22 version looks staggering with all its details, like all the cables and hoses.

Few FS22 silage trailers looks as good as the Bergmann HTW 65 . If you’ve ever tried 3D modeling, I’m sure you’ll appreciate all the gorgeous details in this trailer.

Just think about how long it must have taken the 3D artist to add all those hoses and cables!

When you visit the shop to buy the trailer, you’ll be presented with some options for extras:

I know, of course, that flying chunks of debris aren’t a thing in FS22. However, if it’s implemented in the future, you can prepare yourself.

This is the semi-trailer version of the Bergmann, btw. It looks darn great behind most trucks in the game.

You can use it with tractors too. The Bergmann comes with a Krampe Dolly, making it a turntable trailer.

Yes, the capacity is about 11 m³ lesser. However, it’s also 11,000 cheaper. It’s a great alternative when you can’t afford the larger model.

Also, some FS22 farms are small, with narrow passages and tight turns. Then it’s better to be small and agile than large and unwieldy.

The smaller size also means that the pulling vehicle can be less powerful and thus cheaper.

Admittedly, the shopping options won’t blow you away:

Nonetheless, I think it’s a great mod.  The modder has done a great job downsizing the trailer.

Here’s the Krone TX 460 D silage trailer for FS22. This is how I picture its journey to the game.

No matter how it was brought here, I’m excited to see it in the game. It’s the perfect trailer when you don’t have the money for one of the larger models.

One advantage of using the TX 460 D is the weight if you play with the trailer fill limit activated. It’s so light it almost matches the max capacity of the game’s three-axle trailers.

Inside the shop, the modder has lived by the KISS principle “Keep It Simple Stupid.” There isn’t much to configure:

I don’t mind the relatively poor selection of configuration options. The mod is fantastic in all the other ways.

Here you have one of the largest trailers of them all in Farming Simulator 22. The Krone TX 560 D silage trailer has a loading capacity of a staggering 56,000 liters. That is if you are not using the game’s max weight feature.

The trailer was part of the FS19 vanilla game lineup but was nowhere to be seen when FS22 launched.

Fortunately, it showed up as a Giants Software mod a couple of months after the release.

The customization options include:

The trailer makes a majestic appearance in the game. It’s the new sound effects that impress me the most.

Finally, the Claas Cargos 750 and 760 silage trailers are available for everyone, not only those who bought the FS19 Claas Platinum DLC.

The Cargos duo is perfect trailers. Their FS19 debut marked a shift in how detailed Giants Software’s models are. All original models since then have more details and more realistic looks.

The FS22 Cargos-trailers are no exception. They look darn good. And it gets better. All the added sound effects make for an impressive appearance.

The shop options include wheels from different manufacturers. There’s also an option for license plates.

Another great trailer for your forage harvests is the Kaweco Radium 245, the little brother of the Radium 255 that already exists in the game.

The loading capacity is “only” 38,500 liters, but everything isn’t about being big. Smaller trailers like this Kaweco is easier to handle, especially where roads and farmyards are small and narrow.

This Kaweco trailer comes with some excellent shop options:

I’m a massive fan of Schnibbl Modding, who made this trailer. He has reworked several of the tools that came with the game to make unique mods, often different models from the vanilla game versions.

The Schuitemaker Siwa 720 is another trailer that was in FS19 but not FS22. Until now. The modder Niklge has made sure the large silage trailer gets a second run in the new game.

It still has that rear extension that increases the load capacity by 3,500 liters. Just remember to buy it in the shop.

Now that we’re in the shop, let’s look at what you can customize:

I greatly like the Schuitemaker-trailer, especially since it has gotten so many cool sound effects. It’s also great that it has steering on both axles. It makes the trailer relatively easy to operate, even when you hook it up directly to a forage harvester. 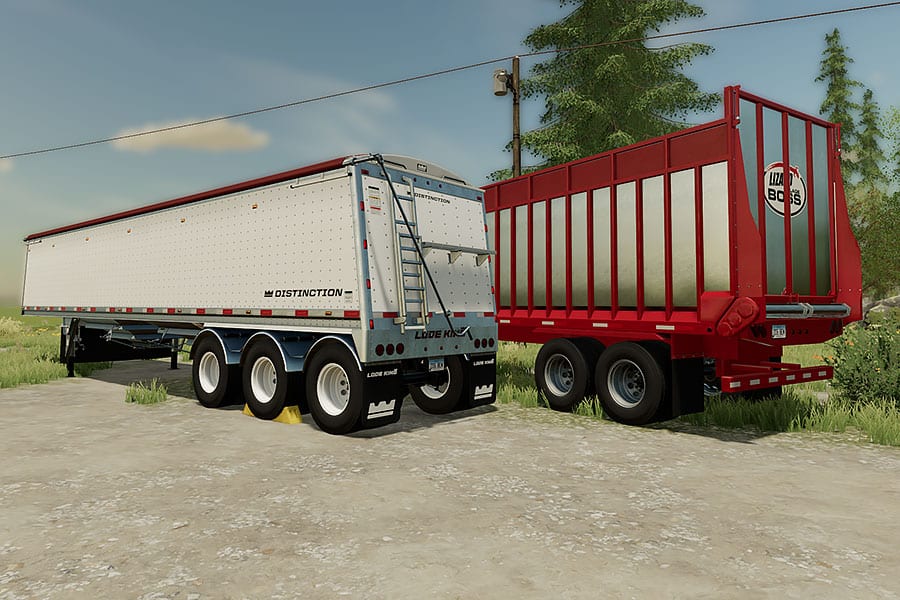