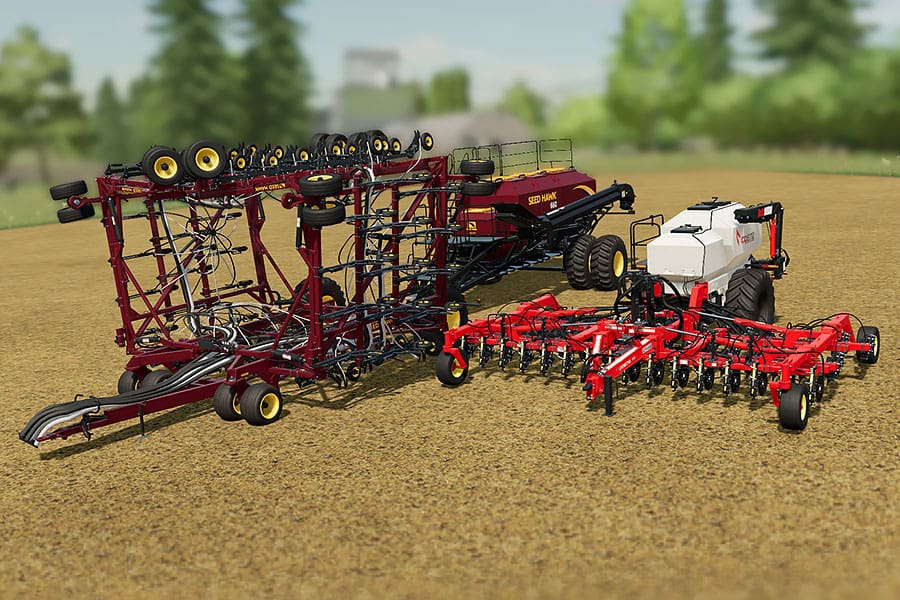 If you want to progress in Farming Simulator 22 (FS22), you’ll sooner or later need a seeder. However, just don’t settle for any seeder. Use one of the good ones.

The smallest seeder from the FS19 Bourgault DLC has finally been converted and transferred to FS22. Well, the term small is relative. The working width is a good 8 meters.

It’s pretty fast too. Giants Software has set the work speed to 18 kilometers per hour, 11 miles per hour. That makes the Bourgault seeder one of the fastest in the game.

Another great feature is that you can fill it with both seeds and fertilizer. Also, it’s a direct seeding seeder. It cultivates the soil before it puts down the seeds. Both features save you a ton of time.

Do you miss the excellent Seed Hawk drill and air cart part of the FS17 Big Bud DLC? The wait is over sort of.

Two modders, Bcbuhler and Forward Agricultural, have worked together to bring a smaller Seed Hawk to FS22. And boy, have they done a great job!

Their Seed Hawk pack is made up of these tools:

The air cart can be configured as a tow-behind or tow-between cart. There are other customization possibilities too:

Another stylish feature is that you can dress the drill and the air cart in Seed Hawk or Väderstad colors. Huh? Väderstad, you might ask?

Yes, the Swedish company Väderstad bought Seed Hawk (the company) back in 2013. The mod reflects that.

Here’s the majestic Horsch Evo 12.375 that you might did use in FS19. I did for sure. I must indeed have spent over 100 hours in the previous game, pulling this magnificent piece of equipment,

That’s why I’m almost ecstatic to see it all dressed up for Farming Simulator 22 (FS22.) It’s so great to see it again, behind my tractors.

The seeder is part of the large Horsch pack mod for FS22. It’s one of 17 brilliant tools. You can read more about the other seeder in the pack further down.

One of several benefits of this Horsch seeder is that it allows you to plant your seeds immediately after the previous harvest is done. You don’t have to run a plow or a cultivator over the ground first.

The seeder will also keep you going for a while before you have to refill it:

The model has gotten sound updates too. All of the seeder’s moving parts make some kind of sound, which is fantastic.

This is the Kverneland DG II 12000 seeder. It was part of the Kverneland and Vicon equipment pack DLC for FS19. Now, it’s a mod, free for everyone to use.

The FS22 version has several good things going on:

The seeder hooks up to the lower hitch points of the tractor’s 3-point hitch. Because there’s a joint between the seeder’s hitch and the drawbar, it’s possible to make really tight turns.

There are some snags, though, at least to some players:

Finally, the Hatzenbichler Terminator TH18 air seeder and the TH1400 air cart are back. This seeding power pack made its rounds through both FS17 and FS19.

Now, thanks to Giants Software, it’s back in Farming Simulator 22 (FS22.)

Because of the heavy-duty cultivator of the Terminator TH18, you can sow right after a field is harvested. In other words, no need to plow or cultivate before putting seeds into the ground with this bad boy.

The textures have been updated, and extra sound effects have been added to the mod. You get the “clank” sound when hooking up the air cart to the seeder and lots of other soundbites.

It’s a great mod. You’ll cover a lot of ground quickly thanks to the massive air cart and a seeding width of 18 meters.

I love farming of all sizes. Extra large, large, medium, and small. And when I want to scale back, this Case IH 5100 seeder mod is just what I want and need.

This mod resembles one of the older grain drills from Case IH. Even though it’s an older model, I know many farmers still use real-life versions today.

The FS22 version has two hoppers: One for seeds and the other one for solid fertilizer.

Here are the customization options:

The seeder has two hitch frames, suitable for pulling 2more drills at once. Just be aware that the 6-meter-wide seeder doesn’t fold – You might be challenged when pulling it on roads with oncoming traffic.

The Horsch Serto 12SC seeder has a well-deserved spot on the great FS22 seeder mods list. It’s another gem from the Horsch pack that I mentioned above.

All the seeder’s details have been upgraded for the new game. It even has matching audios for all moving parts. The sound upgrades are among the things I like the most about the mod.

It does also have some reasonably impressive tank stats:

However, it doesn’t cultivate. You need to run a plow or cultivator before you can put seed into the soil with it.

I don’t see this as a problem, but I know a lot of players who prefer seeders that do both the cultivating and the seeding.

The Kuhn Espro 3000, the little brother of the vanilla game’s Kuhn Espro 6000 RC, has a definite spot on this list.

It made its Farming Simulator debut in FS17 as part of the Kuhn Equipment Pack DLC. Later, it was added as a mod to FS19 until it reappeared again in FS22.

I like several things about this small seeder, like how you can make tight turns thanks to the connection to the lower lift arms of the tractor’s 3-point hitch.

While you don’t have to prepare your fields before sowing with the Espro 3000, you must do two rounds of fertilizing besides the seeding run.

A Quick-Guide to FS22 Seeders

Real-life versions plant the seeds in rows close to each other. A row spacing of 10—15 centimeters, 4—6 inches, is relatively standard.

In Farming Simulator 22, you can use a seeder to plant the following plants, provided you’re not playing on a modded map: