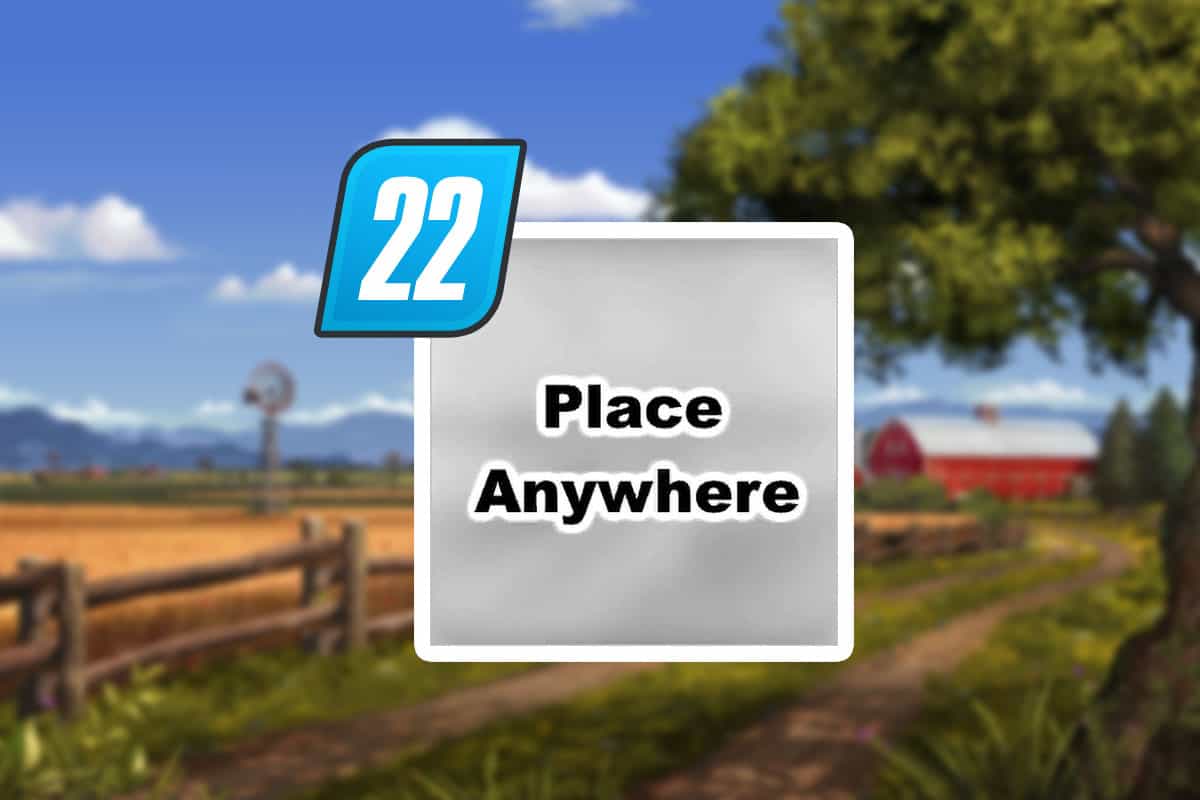 With the FS22 Place Anywhere mod, you can place buildings and other objects literally anywhere in construction mode in Farming Simulator 22 (FS22.) Here’s how you use it and where the proper place to download it is.

Note: This mod is pretty much obsolete since the FS22 1.2.0.2 patch. That patch includes a Place Anywhere feature that works just as well as all Place Anywhere mods and the Placeable Extended mod.

All video games have collisions. FS22 too. No, I’m not thinking of AI traffic crashing into you when you’re pulling a record-high bale stack, only to tip over because of the impact.

I’m talking about invisible boundaries, or walls if you like, that stop game objects from moving through each other.

Those red boxes in the image above are the collisions for the FS22 John Deere 6R tractors. They are usually invisible, but I’ve made them visible so it’s easier to understand what I’m talking about.

If it wasn’t for collisions, you could drive the JD straight through the walls of every building in FS22 or through other machinery. Not very realistic, right?

Note that also all objects and buildings have collisions in the game. It’s those collisions in particular that make life hard for Farm Sim construction work.

The problem with collisions in FS22 occurs when you enter construction mode.

Have you tried placing an object really close to another object in construction mode? If you have, I bet that you’ve noticed the warning message saying Overlaps with another object.

Well, the Place Anywhere mod for FS22 removes that obstacle for you, literally.

How the mod works

The FS22 version of Place Anywhere doesn’t remove the actual collisions in the game. They are still there, and you still can’t drive tractors through walls.

Instead, the mod helps override the strict placing limits put in place by the Construction mode. No, it doesn’t break your game. It won’t affect performance negatively.

It just eases the rules.

How to Use the Mod

The beauty of the Place Anywhere mod is how simple it is while simultaneously having a huge, positive effect on gameplay.

Here’s how you use it:

That’s all you have to do. Now, you can start building out your farm and factories without worrying about strict placement rules.

Even if the mod is called Place Anywhere, you can’t place stuff 100 % anywhere you want all the time. There are some limitations:

FS22 Place Anywhere is still a lot more powerful than the FS19 version:

It’s the brilliant modder Ifko[nator] that has created the FS22 Place Anywhere mod. He works closely with Farmer_Andy, the creator of the FS19 smash hit Hof Bergmann.

Together, they run the LS Farming Mods website, which is the only place where you should download this mod.

Just note that you have to register as a member to download mods from that site. It’s both free and well worth it. Ifko[nator] and Farmer_Andy have created some of the best mods in the history of Farm Sim games.

Here’s the link to the download location for FS22 Place Anywhere. You can register as a member from that page.

If you want to download a similar mod straight from the modhub inside the game, you can take a look at the PlaceableExtended mod for FS22.

It does precisely the same as Place Anywhere but is a bit easier to download.

Do you want more? Check this out: Awesome FS2 Script Mods.