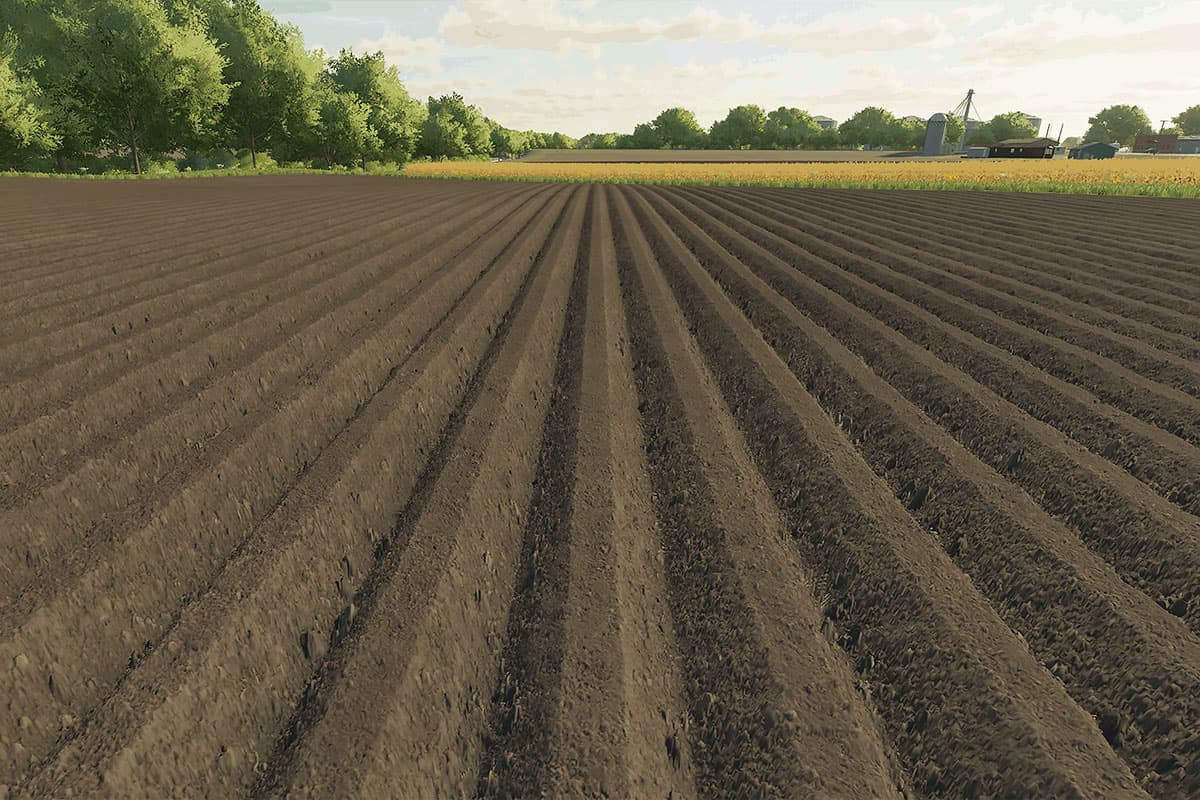 Thanks to Parallax Occlusion Mapping (POM,) Farming Simulator 22 (FS22) has the most realistic-looking ground textures of any of the installments in the franchise. Because of this groundbreaking technique, fields, and other surfaces, looks more natural, detailed, and even dynamic.

But what is POM? And how does it work?

All 3D objects you see in most video games are made up of small triangles. For example, in any scene of FS22, there can be millions of those triangles, creating everything from tractors and animals to the crops you harvest.

The Solution? Use different types of textures and shaders to create optical illusions in the game. Use them to add stuff to the game that isn’t really there.

Confused? Hang on! We’re not finished.

It all Starts with Normal Maps

In game development, normal mapping is the most basic technique for creating illusions of depth and details on all kinds of surfaces.

The benefit? The developers don’t have to flood their games with extra, performance-intensive 3D details. Instead, they can use cheap (performance-wise) 2D textures to “fake” the details.

Suppose you study a tractor up close, especially in older Farming Simulator games. In that case, you’ll easily spot how stuff like nuts and bolts are “printed” onto the model. They aren’t really there because they are created by normal maps.

Instead of a normal map, POM uses textures called height maps. Height maps are really nothing more than grayscale images. The darkness and brightness of the image are used by the game’s shaders to determine the depths or heights of the final projection onto the 3D surface.

Let’s illustrate the effect on the 3D surface below. It has a pretty dull 2D mud texture applied to it.

To make it more exciting, we find ourselves a cool height map (thanks to Giants Software.)

Now, when we apply the heightmap to the 3D surface, look what happens:

Remember, we haven’t added more details to the 3D model. Every detail is created by the 2D heightmap.

If Giants Software made games without shaders and texturing techniques, the Farming Simulator series would be unplayable, even on the most powerful gaming rigs.

The number of triangles needed would indeed surpass billions and even trillions in the most complex sceneries.

Thanks to optical tools like POM and normal maps, the company can create realistic-looking games with a whole lot less 3D details.

That doesn’t mean POM will work great on every system. Your computer or console will work harder when POM is enabled. Luckily, Giants have made it optional to use POM or not.

So, how does POM look like in FS22? Well, the best way to view the final result is to buy the game and try it out for yourself.

You can also look at the image below. Just be aware that still-images don’t give you the best impression of how POM affects the surfaces in FS22.

Here are some beautiful potato ridges. Do you notice how the peaks seem to be higher with POM enabled?

Note: The POM effect works when you look at the surface above a certain angle. Looking at the same surface below that angle reveals how the surface actually is flat as a pancake…

You can see more examples of how POM affects the surfaces in the new game in Giants Software showcase blog post: First Look at Parallax Occlusion Mapping in Farming Simulator 22.

The short answer is no.