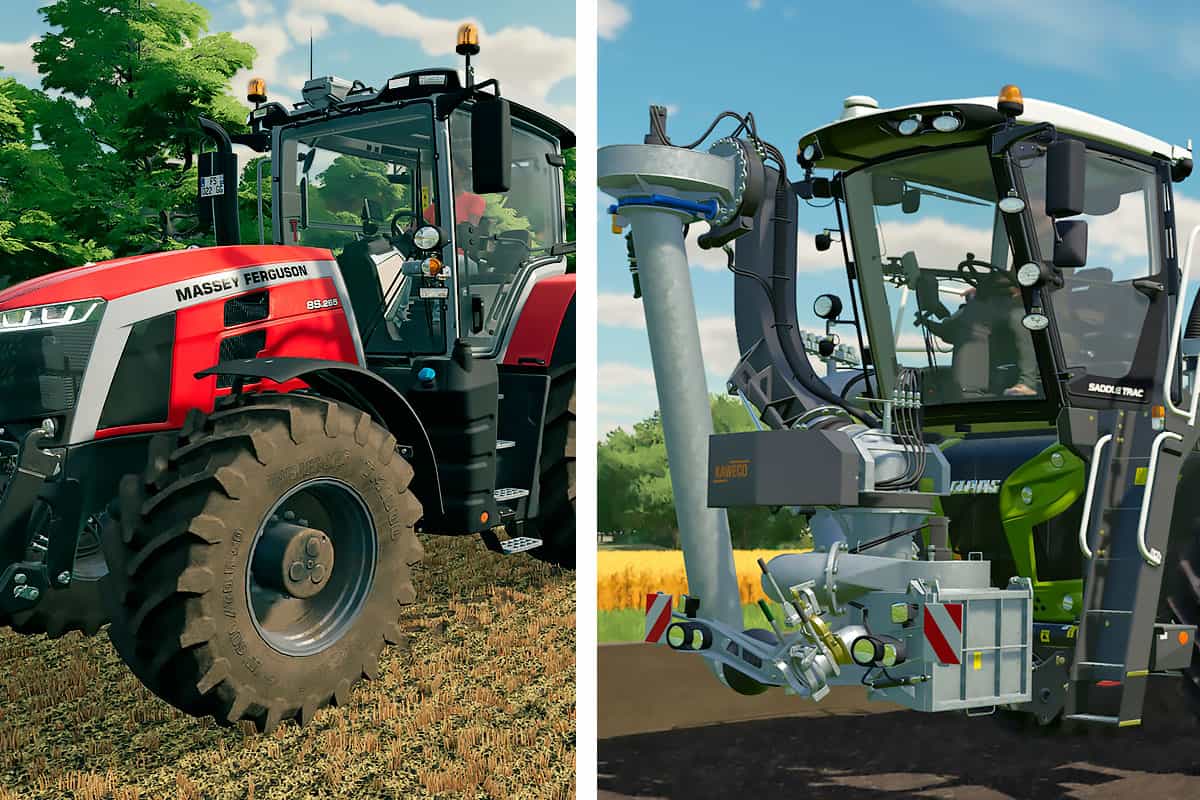 Farming Simulator 22 (FS22) has more than 400 different tractors, harvesters, trucks, and other tools and equipment inside the base game. More than 100 brands have said yes to have their machinery in the game.

The New FS22 Vehicles and Equipment

When we say base game, we mean FS22 out of the box without mods. When we say new vehicles and tools, we mean machinery that hasn’t been part of the base game roster in the last installments of the game (we’re not talking about mods here.)

With that out of the way, here are some of the new base game garage additions for FS22 (click on each image to open larger versions):

The new Claas Trion harvester is accompanied by the Convio Flex series headers. One example is the Convio Flex 1080 model that also is part of the FS22 machinery lineup.

If you’ve preordered the new game, you’ll undoubtedly enjoy the Claas Xerion 4200 Saddle Trac pack. The tractor can, for example, be used with the Kaweco trailer below (also included in the pack.)

There are two different slurry tank trailers in the Saddle Trac pack from Kaweco. One semi-trailer tank and one tank that’s mounted directly on the back of the tractor.

The Kaweco Opti-Ject 800 is a slurry injector with a working width of 8 meters. It’s also part of the Saddle Trac pack preorder offer.

Case IH presented its updated Magnum series tractors back in 2019. Now, the new models are also available in the new game.

The Fendt 200 Vario tractor is one of the narrowest vehicles in the game. It’s perfect for driving between rows of grapevines.

We’ve also spotted another compact tractor in the marketing material for FS22. A Landini orchard tractor. We’re not quite sure of the model yet, but we are induced by those saying it’s the Rex 4-100F.

The John Deere (JD) 7810 tractor was spotted in one of the FarmCon 21 videos. It’s an older model; the real-life version was produced between 1997 and 2003 at the JD plant in Waterloo, USA.

Massey Ferguson made a splash with the introduction of the 8S series tractors in 2020. Yes, you can also put this magnificent machine to work in the new game.

The Farming Simulator 2015 Gold-Addon introduced players to the Zetor brand, with models like the Forterra and the Proxima. In FS22, the new Crystal HD series joins Zetor’s farm sim lineup.

We remember players stating that Giants Software would never get the license for American truck brands. Well, the Mack Super-Liner in FS22 proves that we should never take anything for granted.

Since grapes are a new crop in FS22, you need something to harvest the grapes with, right? The New Holland Braud 9070L grape harvester is an excellent solution.

Farming Simulator players have enjoyed several New Holland combines over the years, but never the CH7.70 out of the box. In FS22, you can.

Krone and New Holland have been the significant forage harvester brands in the Farming Simulator franchise. In FS22, they are joined by Fendt and the Katana 650 harvester.

Kuhn has been one of the major brands in many previous installments of the Farming Simulator game series. In FS22, the SPW Intense self-propelled mixer is a brand new addition.

In the video revealing the JD 7810 tractor, it’s also possible to see a turntable trailer from the German manufacturer Rudolph & Sohn GmbH.

Swedish manufacturer Väderstad is returning with one of its most giant farm sim implement to date: The massive NZ Extreme 1425 tine harrow. The real-life counterpart was introduced at Agritechnica in 2019.

The Disc-O-Vigne is a disc stubble breaker from the French manufacturer Agrisem. It’s used for removing weeds and leveling the soil between grapevines.

The Kuhn Espro 3000 seeder was part of the Kuhn DLC for Farming Simulator 17. Now, in FS22, you can seed your fields with the larger Espro 6000 RC. Yes, the new Kuhn has twice the working width.

The Hardi Mercury 4000 mist blower is a sprayer for your grapevines. You can use it to spray pesticides.

SaMASZ is a Polish manufacturer of farming equipment. In the image, you can see a Zetor Crystal pulling a twin-rotor rake from SaMASZ.