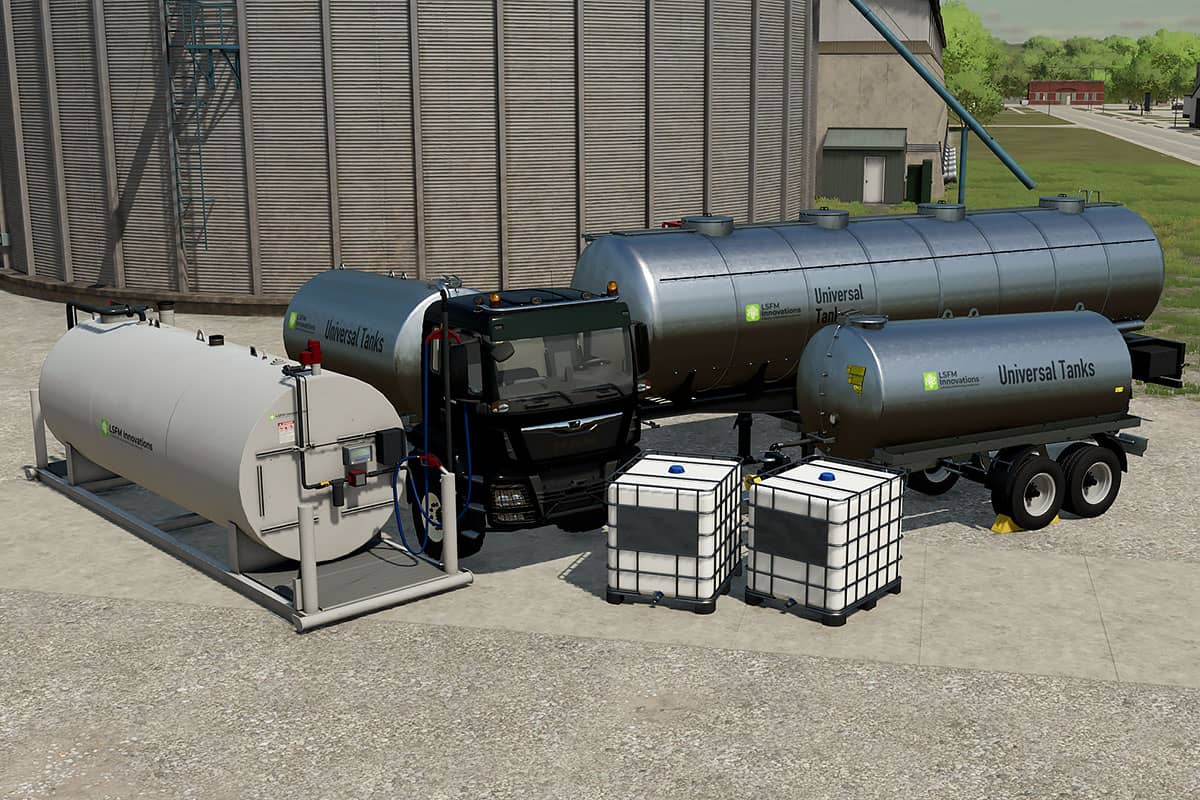 Want one of the best tank trailer packs for Farming Simulator 22 (FS22)? The FS22 LSFM Universal Tank Pack is one of the best and most impressive mods. It’s not one, but 12 amazing mods in one pack.

The LSFM Universal Tank Pack is made up of 12 different objects. This is what you get when you download it:

Now, let’s take a closer look at the different tanks that you get with this mod:

This is the smallest tank in the pack. The tank is 7,500 liters; the max weight is 10 tons. It can transport all liquids in the game, ranging from DEF and diesel to milk and liquid manure.

You can configure it in two different ways:

Note that how you configure it determines what you can fill it with.

The UTT-7500 is designed to be pulled by tractors.

The UTT-18000 is the UTT-7500’s bigger brother. It has the same features and capabilities as the smaller tank.

Because of the size and the weight, you’re better off using a larger tractor to pull it.

The UTTS-32000 semi-trailer has really the only tank with different features than the rest.

Yes, the UTS-32000 can both transport liquids and solids. You just have to configure it for your desired purpose in the shop.

The UST-25000 is supposed to be a stationary, refillable tank for all your liquid storage needs. However, it’s not a placeable object.

Instead, you can move it around with a telehandler and the included loading hook. How’s that for placeable freedom?

The LSFM Innovations ST-10000 tank is designed to be mounted on any truck in FS22. The only prerequisite is that the truck has a fifth-wheel coupling.

But how do you get it on the truck, I hear you ask?

Well, I’m here to show you. You need two things:

Now, let’s put the tank on a truck, shall we?

1. Navigate your telehandler to position the loader hook above the tank. When you’re aligned correctly, a message on the screen tells you to press Q to attach the tank.

2. Put down the tank on the rear of the truck. Press Q again to release it.

Just take it easy. The tank tends to swing a lot while hanging from the hook.

3. Now, get in your truck. If you’ve done everything right, you’ll see a message to press Q once more to attach the tank.

Removing the tank off the truck is as easy as attaching it. Just use the steps I show you above, only in the opposite order.

The ST-10000 has the same features as the tanks above.

You can, for example, use it as a shuttle tank for transporting liquid manure (slurry) between your farm and slurry spreaders in the fields.

Yes, it works as a slurry spreader too.

LSFM Innovations ITRC-15000 is another combi-tank that works as a transport tank and a slurry spreader. You just have to pick the correct configuration in the shop.

The only difference is that you need the TR 26.33 HD ITRunner platform to move it. The platform trailer is included with the pack.

The LSFM Innovations IBC tank is a refillable tank that holds all FS22 liquids. It has a capacity of 2,000 liters.

When empty, you can move it by hand. When full, use a tractor or a telehandler and a pallet fork to move it around.

The thing I like the most about this tank is how you can buy a slightly transparent version of it. This makes it possible actually to see the fluids inside the tank. Cool, right?

I’m honestly stunned by the awesomeness of the LSFM Universal tank pack. This FS22 mod impresses me in all ways imaginable.

I can’t imagine we’ll see a better collection of tanker trailers for FS22.

The pack is made by Farmer_Andy, the modding genius that gave us the excellent Hof Bergmann map for FS19 and other great mods.

I’m so happy to see him back for FS22. The tanker pack is a fantastic taste of what’s about to come from one of the best Farming Simulator mod creators of all time.

Out of respect for Farmer_Andy, there’s only one place you should download the tanker pack: The LSFM website (LSFarming-Mods.com).

Other sites that offer you to download the mod have stolen it.

Yes, you have to sign up to access the download link. I promise you it’s well worth it. I know there will be more amazing mods for FS22 available on that site in the future.