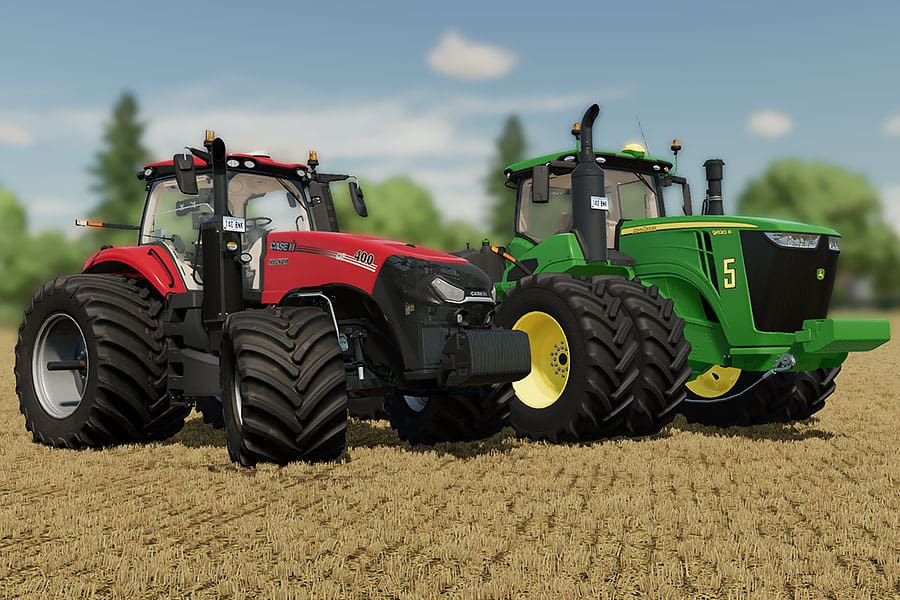 Small tractors do small jobs. Large tractors do big jobs. This is as true in Farming Simulator 22 (FS22) as in real-world farming. This post is for you if you want to do more in less time in the game.

Here is my list of recommended FS22 large tractor mods:

SiiD Modding, one of the most talented FS modders, has added most of the missing pieces to the base game’s large John Deere tractors.

The result is a powerful pack of green machines:

In my opinion, the best expansion is the localization options. You can dress all JDs in a US/Canadian, Australian, or European outfit.

Those options include oversize signs for the Aussie version and North American flashers that look like the real thing.

As with other mods from SiiD Modding, the pack of large John Deeres has lots of configuration options. Here are just some of them:

This pack of John Deere tractors is another win for SiiD. It’s an impressive package he has put together, expanding on the features and options of the models that already exist in the game.

The tractors don’t have extra animations, though. You can’t, for instance, open the doors.

A mouse or a controller can open the left door.

I think the localization options are what make this Case stand out. For example, choosing the EU or US version adds different blinkers and hitches to the tractor.

Right now, the Case IH AFS Connect Steiger by KarlFarms is the best tractor mod for Farming Simulator 22, no matter the category. FS22 tractor mods can’t get much better than this.

The mod expands the base game’s Case IH Steiger tractor in all ways imaginable. You don’t get just one, but two different tractors:

The main difference is this:

The Rowtrac version has several options for belt tracks on both axles:

The narrow frame version uses wheels and lots of them:

KarlFarms has always added tons of optional features to his mods. The FS22 Steiger tractors are no exemption.

If you enjoy personalizing your vehicles and tools, you’ll love all the customization options:

Several animations have sound effects, like opening and shutting the door.

It’s difficult to find words describing how good this mod is. Brilliant, impressive, astonishing… Yes, it’s all that and then some. My advice? Treat yourself; try it yourself. I promise you won’t regret it.

Here you have the FS22 base game John Deere 9RX with a lot of added goodies. It’s another of SiiD Modding’s magnificent mods.

Most important for many players are the localization options. The 9RX mod has design settings for three farming hotspots:

That is, of course, not all. Inside the shop, you can spend a lot of time and money on add-ons and extra equipment:

It’s even possible to add a CB radio inside the cab. However, no one responds when I do radio checks…

Want to be able to turn on a dime? Well, look no further. Here’s the mighty John Deere 9RT for you. It’s one of the best large tractors to drive in FS22.

Not only is the turn radius extreme, but it’s also a great ride. Even over the most rugged terrain, driving feels like being in a boat floating on smooth water.

Ok, before anyone gets seasick, we’ll look at what’s inside the shop. (Spoiler alert: it’s a lot…)

There’s so much about this mod to enjoy, like the hood that can be popped open for engine inspections.

All in all, it’s one of those mods that demonstrates what talented people can achieve. They break down Giants’ models and put them back together, better, stronger, and more comprehensive.

This mod isn’t just one of the best large FS22 tractor mods. It’s also a history lesson. It gives insight into the evolution of the Versatile DeltaTrack series tractors from 2012 to today.

At the start of this period, Versatile started making DeltaTracks. Eventually, the model got two facelifts, one in 2017 and the last in 2021. All designs are represented in this mod:

Kudos to the modder for adding all models to the comprehensive Versatile pack. And no, it’s not just the colors that differ. There are subtle differences regarding the 3D models too.

Not only is the model selection extensive, but so are the shop options:

It’s also possible to buy extra terminals inside the cab. They have no function other than being great to look at, though.

I’m so impressed with all the work that has gone into this mod. Indeed, it wasn’t built in one day; it’s a result of countless hours of hard work.

Great dog of Flanders! That’s a great-looking tractor. It’s the Massey Ferguson 4000 Series in all its glory.

I know many of the brands Giants Software works with only want their newest models in FS22. Luckily, there are generous modders like EY Modding who add classic tractors to the game.

The tractors in Massey Ferguson’s 4000 series are true icons. When they hit the market in the 1970s, no other tractor could match the spacious cabins.

To this day, the 4000 4WDs are some of the most recognizable MF four-wheel drive tractors of all time.

Much of what made the 4000 series so great is included with the FS22 replicas. Like the turning radius that has raised many eyebrows since the late 1970s.

I believe the mod can lift some eyebrows too. The shop menu, for instance, is comprehensive:

Some will say everything was better before. I beg to differ. However, Massey Ferguson indeed mastered the art of making incredible tractors back in the days.

EY Modding is also a master of his craft. The mod is fantastic in almost all ways. I’m incredibly impressed with the interior. The only thing I believe has some potential still are the sound effects. They have some room for improvement…

No «Best FS22 Large Tractor Mods» list is complete without a Big Bud. A safe bet would be to put the Big Bud 747 on this list. However, I’m not going to do that. Instead, I’ll focus on the smaller Big Bud 450.

Although it’s not as powerful as its much bigger brother, it can still pack a punch, pumping out 450 horsepower.

In other words, it’s one of the rarest tractors in world history you can drive once this Big Boy lands in your mods folder.

So, what does it have to offer other than a majestic look? Well, there are a couple of shop options:

And that’s it. There’s nothing more to configure. That’s just fine, especially when the tractor itself is one of the biggest stars of FS22 just because of its sheer presence.

The Fendt 1000 Vario series is one of the most well-known tractor models in the world. Did you know that the same tractor used to have a different dress and logo in Northern America?

It was possible to buy the yellow Challenger 1000 series tractors for some time. Then, AGCO pulled the plug, focusing on establishing Fendt as the leading tractor brand in the US and Canada.

(AGCO owns both the Fendt and the Challenger brands.)

This FS22 mod reflects what used to be possible. It’s 3 tractors and 2 brands in one:

The Fendt, including the Jenz edition, has a traditional EU design. The Challenger model replicates the 1000 series you might see in Canadian and American fields.

Here are the buying choices:

You can open the left door and the rear window. Your mouse or your controller controls both.

It’s a fantastic mod. It looks stunning and sounds even better. The only thing I miss is North American specs for the Fendt.

One of the most talented Farming Simulator mod makers, Smety, is back with this excellent Claas Xerion 3000 series for FS22.

It’s one of the most detailed Claas mods yet, without going overboard, hurting the game’s performance in the process.

Now, let’s enter the shop and see what your options are:

I love the included steering options that are available out of the box. You have four configurations to choose from:

In real-world farming, crab steering reduces the compaction of the soil. This is accomplished by the rear wheels not following the front wheel tracks.

This Xerion 3000 has no additional animations. However, you can buy the option to switch driving directions in the shop. When you enable it, the whole cabin turns 180°.

Note that this option disappears if you put weights on the tractor’s saddle.

The newer the model, the more powerful it is. Each model also has visual variances, like different exterior colors and cabin equipment.

Now, let’s take a look at the shop choices, which are almost identical for all the 3 models:

You can turn the driver seat some degrees to the right. It’s also possible to open the left door.

Here’s the majestic John Deere 8760-8960 tractor mod for the nostalgic FS22 farmer who also wants power and a lot of it.

Even though it’s old, you still have many choices to make inside the shop:

The tractor only uses Michelin wheels, but many different setups are available.

You can also localize the tractor. Australian and North American versions are possible.

The feature I enjoy the most is how it’s possible to open and close the left door. There are sound effects, both for opening and closing it. When you open it, a light turns on, lighting up the inside of the cab.

Besides the standard FS22 animations, you can turn the driver’s seat slightly to the right, which is fantastic. Just use a mouse or a controller to swivel the seat.

The Deutz-Fahr Series 9 is one of the tractor models that didn’t make the cut going from FS19 to FS22. Fortunately, modders have done a terrific job getting the tractor in shape for the new game.

The mod also comes with several color options. When you pair the right color with the corresponding engine model, it’s possible to make the Deutz-Fahr a complete Warrior.

It’s not really the features that secure this John Deere 8RT’s spot on this list. It’s here more for nostalgic reasons. This specific model was one of my favorites in FS19. Now, it has been converted for Farming Simulator 22.

The conversion is as simple as it gets. It’s a bit-by-bit port from the old game to the new. Nothing new has been added, except for updated sound effects.

Still, this JD holds its ground thanks to the many details of the 3D model and the simple fact that it’s cool to have an older version of the 8RT in the game.

Inside the shop, there are a few customization possibilities:

The rubber tracks are significantly narrower if you select the widest axle track, 3 meters. 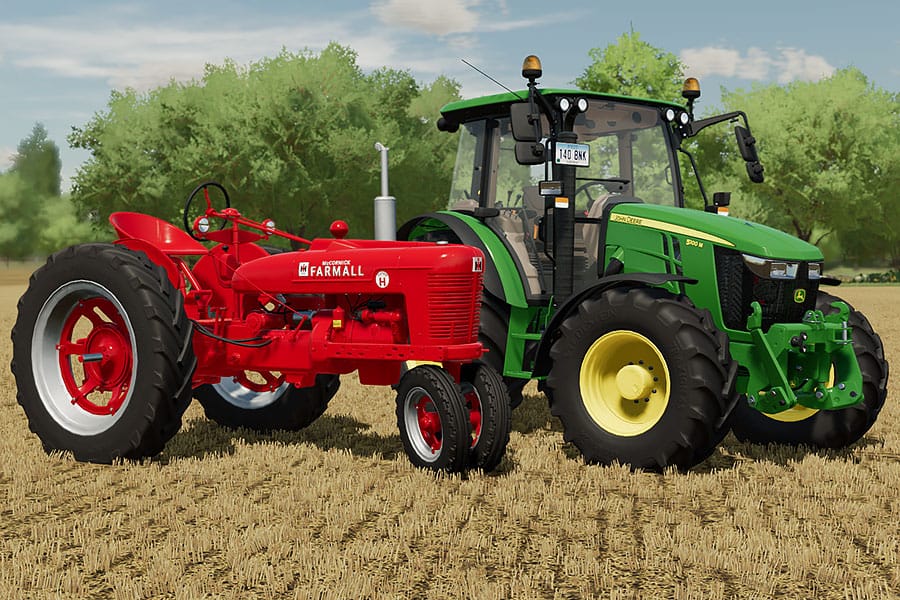