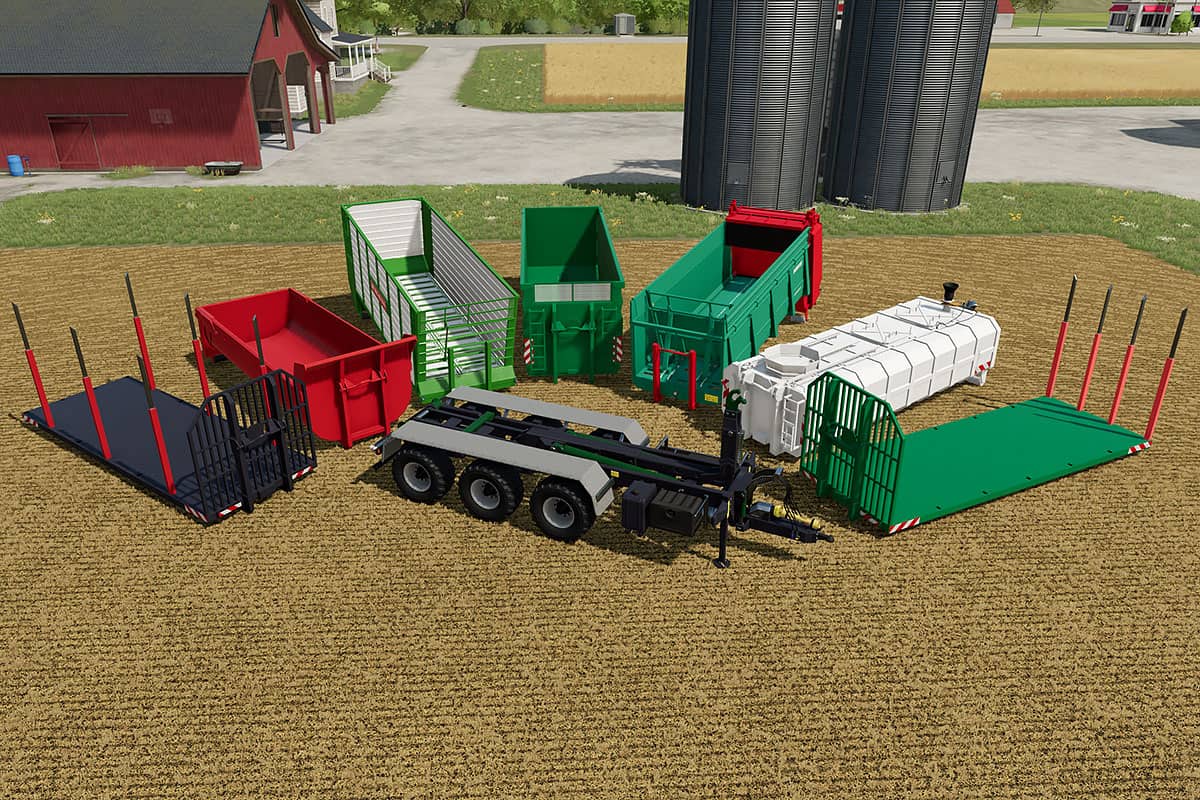 The ITRunner mod for Farming Simulator 22 (FS22) is available for download. It adds a true multi-use trailer to the game. The pack consists of a trailer chassis and seven different modules that you can roll on and roll off the chassis.

The ITRunner Hooklift package made its debut in Farming Simulator 15. It has been a welcome addition to every game since.

The FS22 version is available as a mod thanks to the hard work by the modder that calls himself Th3_Ghostrider. He has converted both the hooklift chassis and the seven modules.

When you download the ITRunner mod for FS22, you get seven different modular components that fit the platform.

You can use the ITRunner tip box for transporting all the solids found in FS22. It will carry anything from cash crops to stones.

It makes use of the hydraulic cylinders mounted on the chassis for tipping.

The ITRunner pack also has a forage box, which is ideal for forage harvesting.

The Bergmann HT 50 has a conveyor floor. Instead of tipping the trailer to unload, the conveyor moves the load off the trailer.

The ITRunner grain container comes with two options for tipping. You can either use the rear door or a grain door located to the rear of the trailer.

The ITRunner pack adds two flatbed modules to the game. The Wood container is ideal for smaller logging operations, while the bale container functions great for bale collecting.

Both trailers have stakes that prevent the load from falling off.

The ITRunner slurry container can transport liquid manure from the farm to slurry tanks in your fields.

Thanks to the back splash plate, you can also use the container to spread the slurry. The spreading width is 12 meters.

Finally, there’s the Fortis 2000 manure spreader. It will hold up to 32,000 liters of solid manure. The spreading width is 15 meters.

Unfortunately, it can’t spread lime, though.

How to Use it

Have you never used the ITRunner trailer before? Here’s a quick guide on how to use it, assuming you’ve already attached the ITR 26.33 HD chassis to a tractor:

1. Press X on your keyboard (L1 + X on PlayStation, LB + A on Xbox) to extend the hooklift arm backward.

3. Press Q on your keyboard (X on PlayStation, A on Xbox) to attach the module to the hook.

4. Finally, Press X on your keyboard (L1 + X on PlayStation, LB + A on Xbox) to retract the hooklift arm and roll the module onto the chassis.

Rolling off the module uses the same procedure, only in the opposite order. Note that you must make the module the active tool before rolling it off.

It’s great to have the ITRunner pack in FS22, but I also think the mod has some room for improvement.

You see, the modules only have one color. There are no options for changing the colors in the shop, which is a bit sad.

However, this shouldn’t overshadow the fact the FS22 version of the ITRunner pack is an appreciated addition to the game.

You can download the ITRunner mod for FS22 when you visit Forbidden Mods. Just look for a button in the upper right corner that says Herunterladen.