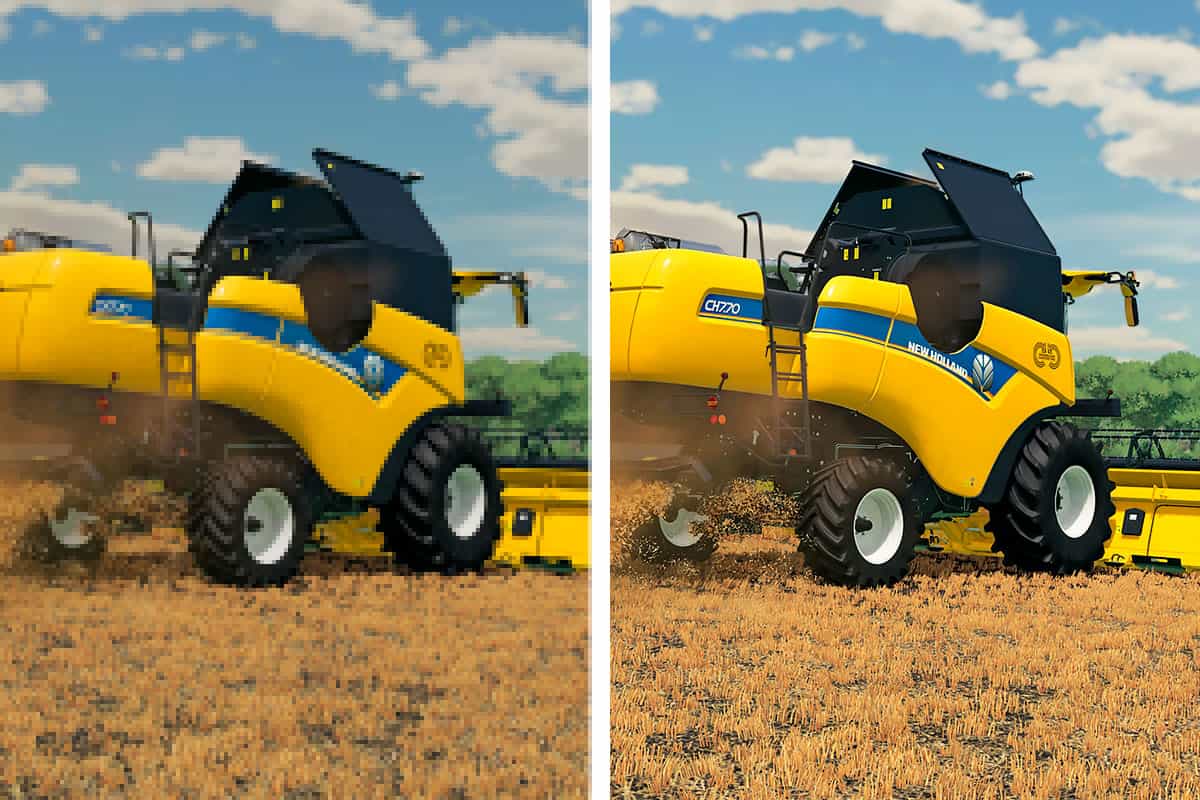 Let’s dive into it, shall we?

Microsoft’s DirectX (DX) is a set of application programming interfaces (APIs) used to handle multimedia. The 3D graphics API within DirectX, Direct3D, is used in the development of games for Microsoft Windows computers and Xbox consoles.

When we’re writing this, DX 12 Ultimate is the latest version of the API collection. It’s available on Windows PCs and the Xbox Series X. In short, it offers game developers more freedom in creating stunning-looking games. For gamers (us), it can boost our game’s graphics and overall performance.

The Farming Simulator games require a good graphics card (GPU) and a good central processing unit (CPU.) The CPU runs the scripts for stuff like the economy, the growth, and the AI workers, not to mention all the script mods. You can have a great GPU and still experience lag because of a CPU that isn’t on pair.

The Farming Simulator games have been using multithreading since FS2011. In simple terms, multithreading is the art of assigning different computing tasks to different cores of the CPU, e.g., the game scripts on core 1, physics on core 2, and sound on core 3.

Optimization of the multithreading in FS22 hopefully means better performance when the CPU is hit hard, for example, when AI workers calculate their paths.

In older installments of the Farming Simulator franchise, all objects on the map are rendered (loaded) as soon as you start the game, even though clip distances are used. The downside? If you’re playing on a map with lots of details, you might experience lag or micro stutter.

FS22 will combat this by introducing Occlusion Culling. This technology tells the game engine to only render (or load, if you prefer) the visible objects in the camera view. Other objects will only be rendered when you move the camera to them.

We’ve made an oversimplified explanation of how this technology works. The first image visualizes Farming Simulator with no occlusion culling. Everything in the camera view, plus everything outside, is rendered.

With occlusion culling enabled, only objects in the camera view will be rendered. Everything outside is hidden and will only be rendered once the player looks at it.

NOTE: When we write this, we don’t know how aggressive Giants’ version of occlusion culling is.

Still, we believe that you can stuff a shed with many high-detail machineries and that walls and the roof prevent them from being rendered unnecessary. The result? Smoother gameplay, less stuttering.

Many games load all their textures at once. This might be too much, especially on lower-end graphic cards. The solution is to lower the game’s graphics settings.

An alternative is to load the textures as they are needed, e.g., visible, in the game. Let’s use an example:

Your character is standing in the middle of a farmyard. In front of him/her, there’s just a tractor, idling on a patch of grass. In this camera view, with texture streaming activated, only the textures for the ground, the grass, and the tractor are loaded into the video ram (VRAM) in your graphics card. When you move the camera from the tractor to a shed, the tractor textures are flushed out of the VRAM and replaced with the shed textures.

Streaming textures like this should mean that also players with low-end graphics cards can enjoy high-quality texturing in FS22.

Suppose you have played FS19 or any older Farming Simulator game. In that case, you have most likely seen how distant leaves, powerlines, building details, and other map stuff flickers and breaks when you pan the camera.

With FS22, this is a thing of the past. Temporal anti-aliasing will make the motion in your digital farming world look smooth instead of broken and fragmented.

To demonstrate how temporal anti-aliasing will make FS22 look better, we have found the video below, showing the same technology in the game War Thunder:

FS22 has an updated Graphical User Interface (GUI), or HUD, as some say. The leading color tone is blue, except for the main menu, where white dominates. Here are some screenshots:

Current and forecasted weather, name of the month, in-game time, time scale, and the money you have are all displayed in the upper right info bar.

The mini-map (or PDA if you like) has a rounded shape. It can rotate with your character or the machinery you’re driving.

Machinery and fill level info is displayed in the lower right corner. The fuel and repair status is now displayed as standing bars. You’ll also get info about the gears of the vehicle you’re operating together with a “Drive,” “Neutral,” and “Reverse” status.

Outside any vehicle, the machinery GUI disappears. Instead, if you’re standing in a field, you’ll get the field info. If you’re close to an animal pen, you’ll see the status of the animals inside it, like the health and food levels.

We are looking forward to all the enhancements FS22 has to offer. We’re pretty sure that most players will experience better graphics, more stable FPS, and less lag and stuttering.

Back to the main article: Farming Simulator 22 Features.