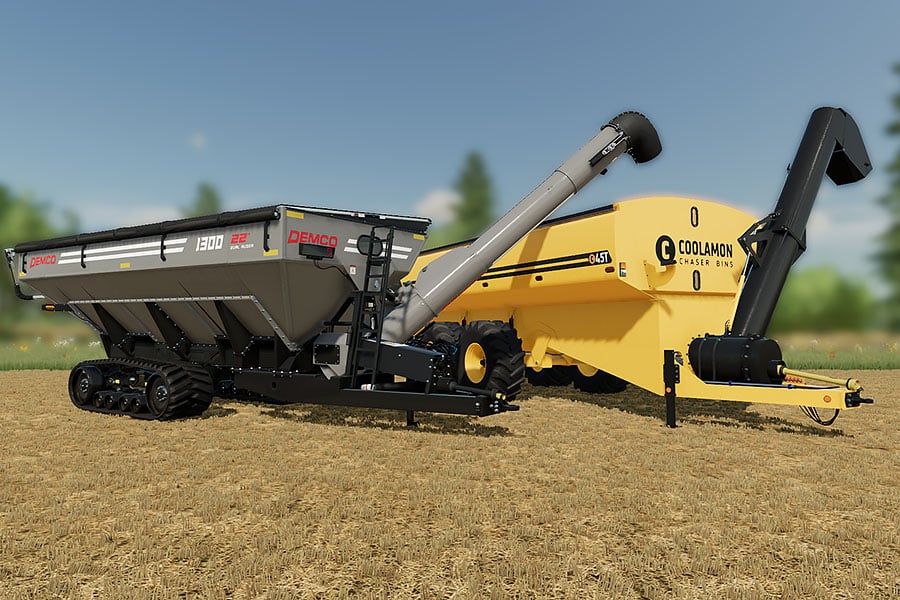 There are several excellent grain cart mods for Farming Simulator 22 already. I’ve taken a closer look at most of them, and this is what I’ve come up with: The best FS22 Grain Cart mods.

Another impressive mod from Custom Modding. Here are two grain carts from Demco:

A significant difference between the two models is how much crop you can fill into them.

The models from Custom Modding make the Demco cart lineup in FS22 almost complete. It’s only the 1700 model that’s missing.

As usual, the level of detail of each model is almost insane.

Of the many things that impress me is the animation of the electric tarp. It’s not the standard on or off animation. Instead, you can see how the tarp is rolled over the hopper.

Other than that, there’s an almost overwhelming amount of customization options inside the shop.

For instance, you can choose between wheels or tracks. You can also buy mounted scales and capacity indicators.

The massive Brent Avalanche 1596 grain cart is back! The first time we saw it in the Farming Simulator games was in FS17. Back then, it was a significant part of the Big Bud DLC.

Thanks to the modder K4mil, it’s also possible to use it in FS22.

The model has received some facelifts to make a grand appearance in the game, like new textures and updated sound effects.

This is what you can configure in the shop:

The only thing I miss is an option for tracks. Real-world Avalanches can be equipped with tracks; the FS22 version can’t, unfortunately.

Want to play around with one of the most enormous grain carts in the world? Then, you should download this fantastic pack of Coolamon chaser bins.

The pack has two models:

Why are they called chaser bins, you might ask?

Well, the Coolamon trailers are made in Australia. Down there, grain carts are often called chaser bins, which is really fitting when you think of it. You use the trailers to chase combines, right?

BTW, Coolamon is an Aboriginal word for a container made of wood or bark, used for holding goods or carrying a baby.

Note: The Coolamon trailers are called Lizard on consoles.

The gigantic Coolamon 150T mother bin isn’t really a grain cart in a traditional sense. You don’t want to chase combines with this bad boy, no matter how strong your tractor is.

Nor is it a bin for disposing of mothers or mothers-in-law, to be clear… It’s more like a mobile and temporary grain bin.

In Australia, where this type of equipment is used a lot, empty mother bins are placed in the fields ahead of the harvest.

The bins work as intermediary storage solutions. They make continuous fieldwork possible. No need to pause and wait for grain trucks that might be many miles away (Australia is huuuge…)

The FS22 replica of the Coolamon 150T is a remarkable piece of modding work. It might be too much on regular 2 km x 2 km maps. However, it has a mission on maps that is 4 km x 4 km or larger.

Note: The Coolamon mother bin is branded Lizard on consoles.

Here’s a great twofer for you: The Kinze 851 and Kinze 1051 grain carts. They were featured as base game equipment in Farming Simulator 19 (FS19) but didn’t transform into FS22.

I really liked those smaller Kinze carts. Luckily, Giants Software made up for not including the carts in the first lineup. They are now offered as mods in the official modhub.

I don’t think you’ll go bonkers over the shop options because there are only two: Standard or wide wheels.

However, both Kinze carts look and operate magnificently. For example, they perfectly fit a tractor like the New Holland T8 Genesis.

There are also updated sounds for the folding animation of the auger. It’s also possible to hear the sound of the cover opening and closing.

Here you have the Demco Posi Flow grain cart for FS22. It comes in three colors:

Inside the shop, you get some wheel options to play around with, for example, duals. You can also add extensions to the cart. The extensions increase the overall capacity.

I particularly like how the trailer revs the tractor engine during unloading. And the visual capacity changes are a nice bonus.

The first version of the cart had some issues. These have now been ironed out. The mod is also updated with all the new FS22 sounds.

This is not a grain cart like the other ones on this list. It doesn’t have the characteristic foldable grain auger. Instead, the crops are offloaded through the grain chute at the bottom of the trailer.

In other words, you can’t use it for overloading crops to other trailers. Instead, you can empty the load directly into unloading triggers.

The J&M 680 has some exciting options in the shop. First, it’s possible to change the colors of the body, the cover, and the rims. There are several cover and logo options too. You can also decide whether you want a warning triangle and where it shall be placed.

My favorite feature is that you can hook one trailer to another. You can pull a train of several J&Ms as long as your tractor is powerful enough.

You have most likely discovered that grain carts are called auger wagons in FS22. Why?

The same tool (basically) having different names has to do with geography.

That’s how I separate them as well. On this page, I write about trailers found in North American fields. If you’re looking for counterparts used in European farming, check this out: Recommended FS22 Auger Wagon mods.