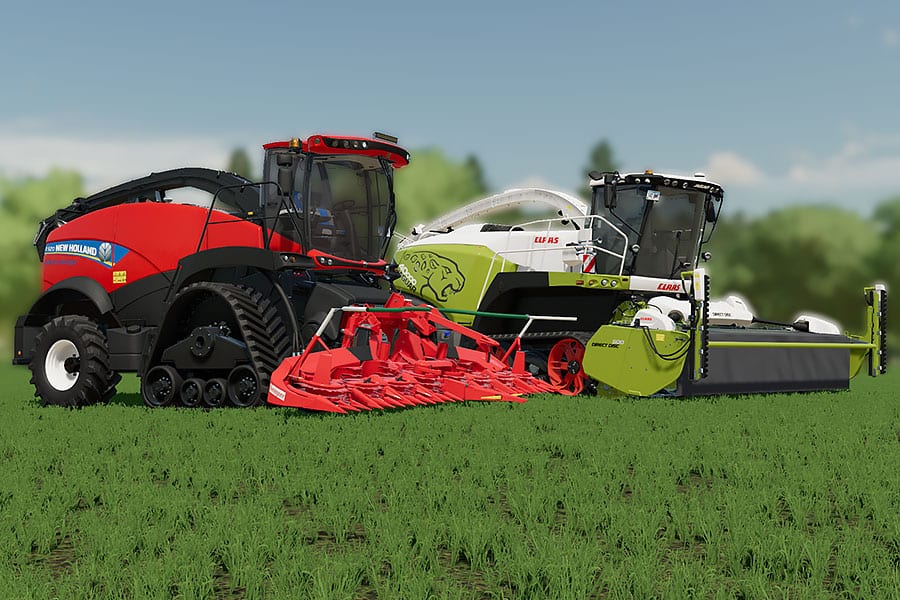 A Quick Introduction to Forage Harvesters

Some harvesters can be attached to tractors; there are also self-propelled versions.

The harvesters will first cut the plants. They are then transported inside the machine and chopped into smaller pieces. The plants are turned into chaff.

Finally, the chaff is blown into a trailer through the harvester’s pipe.

Ok, now back to the topic; Great FS22 forager mods:

I was thrilled to discover that Giants Software had put the magnificent Fendt Katana forage harvester in FS22. Now, I’m even happier, thanks to the modded version of the chopper.

The modified version has more to offer regarding configurations.

My favorite new feature, though, are all the added animations. You can open and close the doors with matching sound effects. There are also animated parts inside the cab, like the hand throttle.

The Claas Jaguar 960-990 TT Pack is one of the most comprehensive forage harvester mods for FS22. The pack star is the tracked Claas Jaguar 900 series Terra Trac forager. It can be delivered in two versions:

Inside the shop, you’ll get a lot more customization options than what the base game version offers:

Note that there are two options for the front tracks. There are standard-sized versions and one option for wider tracks.

Did you know that Claas has built more than 40,000 Jaguar harvesters over the years? You can partake in the celebration of this milestone by adding the limited 40,000 edition emblem to the vehicle.

On the less realistic side, it’s also possible to paint most of the Jaguar’s exterior in many colors.

The cool thing about the headers is that all of them can be repainted in the same colors as the forager.

It’s also possible to add vertical knives to the Direct Disc 500. They are animated but have no function in the game. Still, it’s a nice feature.

The magnificent Claas Jaguar 960-990 TT pack is a prime example of what modders can do to the base game vehicles and tools. This particular mod is miles ahead of the original harvester regarding options and customization.

Unfortunately, there are no North American versions among the FS22 base game choppers. Luckily, we have modders like Whiskey Sierra Modding.

Not only has the modder adjusted the model, but he has also added more options:

Yes, the wheels are up for customization too. You can put single or dual wheels on the front axle. Don’t want wheels? Then choose tracks for the front.

The New Holland Forage Cruiser mod is excellent if you want a North American design for your chopper.

The Claas Jaguar 900 Type 502 is another Americanized forager. The mod includes the whole range of 900 series choppers:

Not only do you have a lot of engine models to choose from. Inside the shop, you’ll find a wide variety of extras and add-ons for the chopper:

The Claas Jaguar 900 Type 502 is one of the best forager mods you can get for FS22, especially if you’re playing on American and Canadian maps and want your equipment to look like they belong there.

This has to be one of the coolest-looking forage harvesters in FS22. The Fortschritt E 281-C Pack is what I would call a highly likable piece of machinery.

It’s also an exciting machine for the farming history geeks. This particular forager, the Fortschritt E 281, could be seen in the 1970s and 1980s fields of East Germany.

Cold War politics aside, it’s great to have a true silage-making icon in FS22.

Don’t expect to be blown away by the customization options, though. You can change the colors of the harvester’s exterior, nothing more.

I’m sure you’ll soon be smiling again because the mod comes with three different headers:

I think the Fortschritt forager is an awesome mod. I especially enjoy all the fantastic animations inside the harvester, clearly visible from the outside.

The Krone Big X 580 is back! First time I used it was in FS17. It didn’t make the cut for the starting lineup for FS22. However, it has clawed its way back to the game as a mod.

There are some drawbacks too. Being unable to choose a different length for the pipe might be the most noticeable.

Inside the shop, there isn’t much you can configure. You can put different wheels on it, and that’s it.

However, looking inside the Forage Harvester Headers section of the game, you’ll notice that the mod has brought back the Krone EasyCollect 600-2 header. It has a working width of 6 meters and a max speed of 10 kilometers per hour, 6 miles per hour.

Do you play Farming Simulator 22 in first-person view? Are you tired of looking straight into endless rows of corn during maize silage? The Krone BiG X forager is an excellent solution, more on that later.

In the game, you’ll notice several nice animations of both interior and exterior parts.

I think the best thing about this chopper mod is that you can raise the cabin. This feature makes it easier to see what’s happening in front of the harvester in corn fields.

Are you looking for a much cheaper, slightly smaller forage harvester than the base game’s John Deere 9000 series?

Well, it’s worth looking at the John Deere 8000i Series machines. The model itself is a tad smaller than the larger model and considerably cheaper.

If you line up both models side by side, you’ll see they are the same, except for the size. The modder has done a great job shrinking the 8000i series.

There are more differences when you enter the shop. The JD 8000i series mod has more options and add-ons:

I’m not a big fan of creative color usage on my FS22 machinery; I tend to stick with the brand colors. However, it’s nice for the mod painters that this JD chopper has a lot of color options.