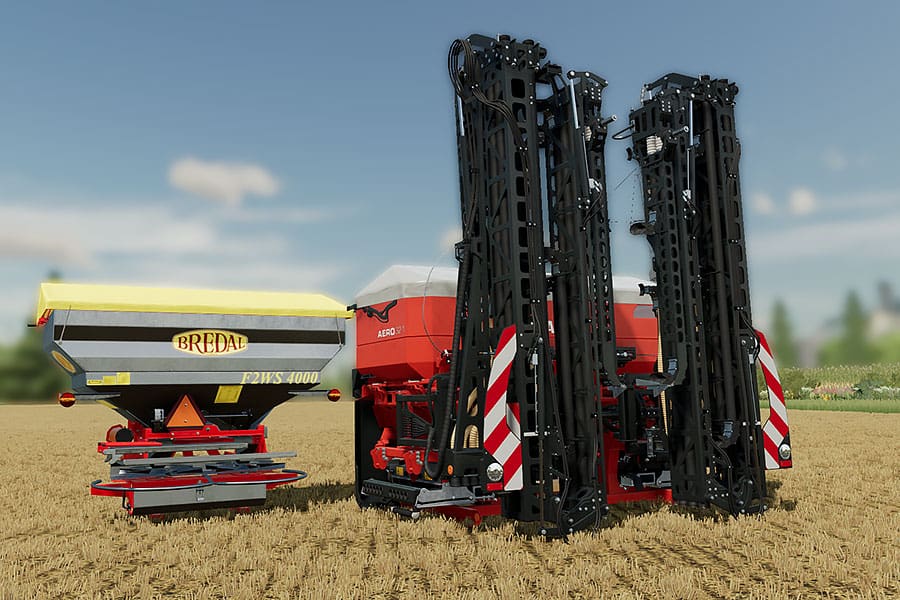 P.S. Note that I’ve also created a list of the best lime spreader mods for the game. All the mods on that list also work with dry fertilizer.

Additionally, there is a sprayer that also has options for spreading solid fertilizer.

Here’s the magnificent Rauch Aero 32.1 fertilizer spreader. It’s nothing like the other sprayers in the game; more on that later.

Except for license plates, there are no options for this spreader in the shop. However, that doesn’t matter much. The Rauch looks so cool with that boom!

You see, it spreads fertilizer through a series of small spreader discs attached to the boom. In real-world farming, this helps deliver the fertilizer much more precisely.

In FS22, this feature means nothing. Still, it’s one of the coolest spreaders I’ve ever worked with.

The level of details on the model itself is almost insane. And the animation of small fertilizer granules being released from the disc is brilliant.

No, it won’t spread lime, though.

The Danish Bredal spreaders made their Farm Sim debut in Farming Simulator 17. Since then, a lot of players have turned into Bredal fans. I’m sure most of them will remain fans now that the tractor-mounted F2WS4000 spreader is back in FS22.

The Bredal F2WS4000 is a high-capacity spreader with space for 4,000 liters of solid fertilizer. Another great thing about it is that you can use it to spread lime.

At the widest, lime and fertilizer get spread over 42 meters. This is respectable, but still eight meters less than the Sulky below.

When I put the Bredal spreader at the top, it’s because of the lime spreading addition that you don’t get with the Sulky. I also like that you can change the color of the spreader in the shop.

The Kuhn Axis 402 tractor-mounted spreader is one of the spreaders with the most configuration options in Farming Simulator 22. It has a total of 4 different tank options.

In other words, it’s an excellent match for adding nutrients to small to really large fields.

This version of the Kuhn spreader was a popular mod back in Farming Simulator 19. I’m happy to see that Kamilos0397 (the modder) has also made it available for FS22.

It utilizes the game’s variable spreading width function. The range is 15—42 meters. Another great thing about it is that you can use it to add lime to your fields.

All the shop options amaze me the most. Besides the capacity extension options, you can:

I think the Sulky X50 Econov is one of the best-looking tractor-mounted fertilizer spreaders in all of FS22. It looks really good with its rounded edges and excellent color combinations.

It does also bring some impressive stats to the game.

The Sulky spreader is somewhat of a technical miracle. It has the largest spreading width of all spreaders in FS22. It can throw solid fertilizer as wide as 50 meters.

Note how I wrote solid fertilizer. It can’t spread lime, unfortunately. It’s honestly not an issue, considering how effective it is in the fields.

Being Scandinavian, I’m a big fan of the Norwegian manufacturer Kverneland. I have, of course, made room for the Kverneland TLX Geospread fertilizer spreader on this list.

The TLX Geospread is one of the larger tractor-mounted spreaders in FS22. You can squeeze almost 4,000 liters of solid fertilizer into it.

Unfortunately, it won’t accept lime if you’re looking for a spreader that does more than just one thing. However, I think the looks and the large capacity of the Kverneland spreader make up for the lacking liming abilities.

While talking about Kverneland, I’ve also chosen to put the Exacta EL on this list.

No, it’s certainly not the most giant spreader. The hopper has just room for 1,000 liters of solid fertilizer even with the extension on.

Although small, it might still be a great catch, even in larger fields. You see, the working width is an impressive 42 meters at the most.

It will also help you spread lime, making the spreader twice as valuable.

The Amazone ZGB 6001 is one of the older trailer spreaders in FS22. I believe Amazone used to make the real-world version in the early 2000s. It’s a good tool when you’re not keen on continuously having to stop spreading to refill the hopper.

The trailed spreader doesn’t manage to impress regarding working width, though. At most, it has a spreading width of just 18 meters. This gets compensated to a certain extent by the large 6,000 liters hopper.

The Amazone does have another trick up its sleeve. It can spread lime too, and not only solid fertilizer.

I like that you can change the wheels for the chassis. There are also some design options available for the interior of the hopper.

According to Wikipedia, Willmar used to be one of the leading sprayer companies in North America. That was until AGCO acquired the company in 1998. Now, it looks like the brand has disappeared in favor of RoGator and TerraGator.

Nevertheless, it’s cool to have the iconic US-made spreader in Farming Simulator 22.

When you download the Willmar mod to your game, you get two trailer spreaders:

Another benefit is that both trailers also can apply lime. You should also know that the spreading width is fixed at 40 feet, 12 meters.

Inside the shop, this is what you can customize:

I spotted one warning in the log about old fill unit specifications. However, it’s not a game-breaker. 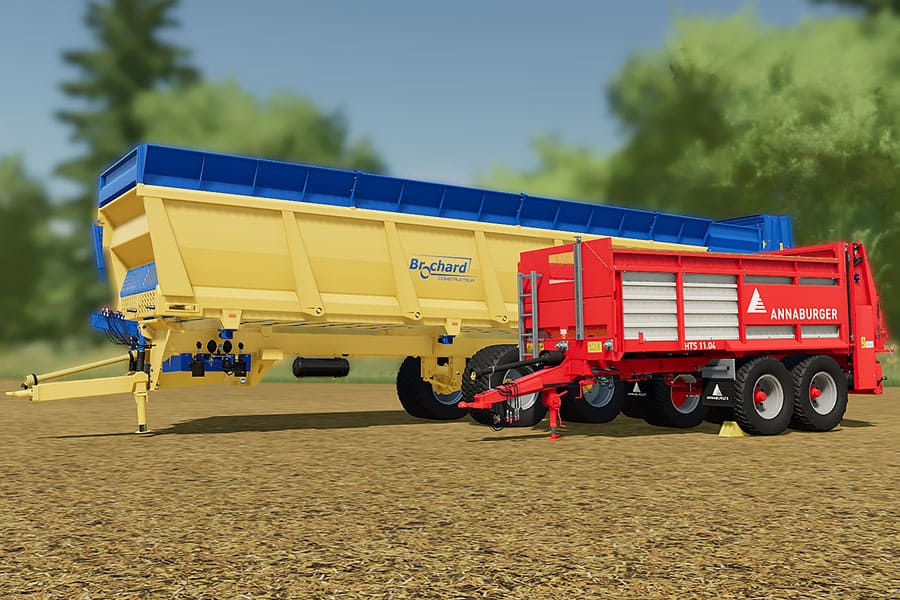 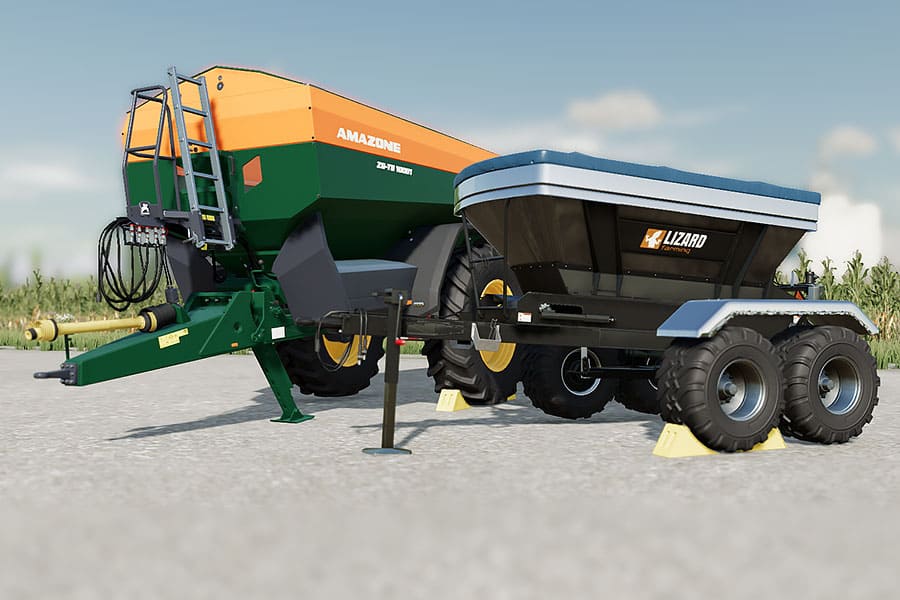 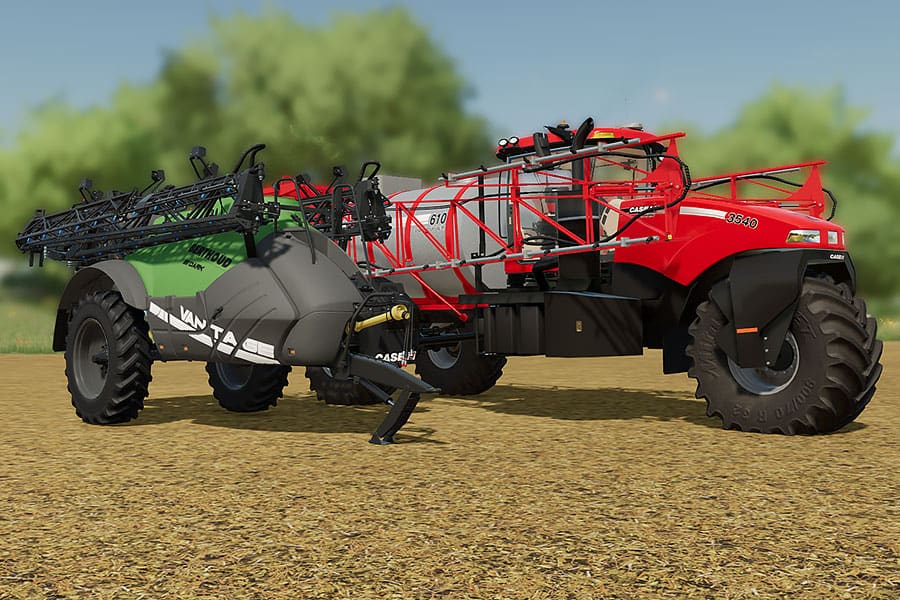 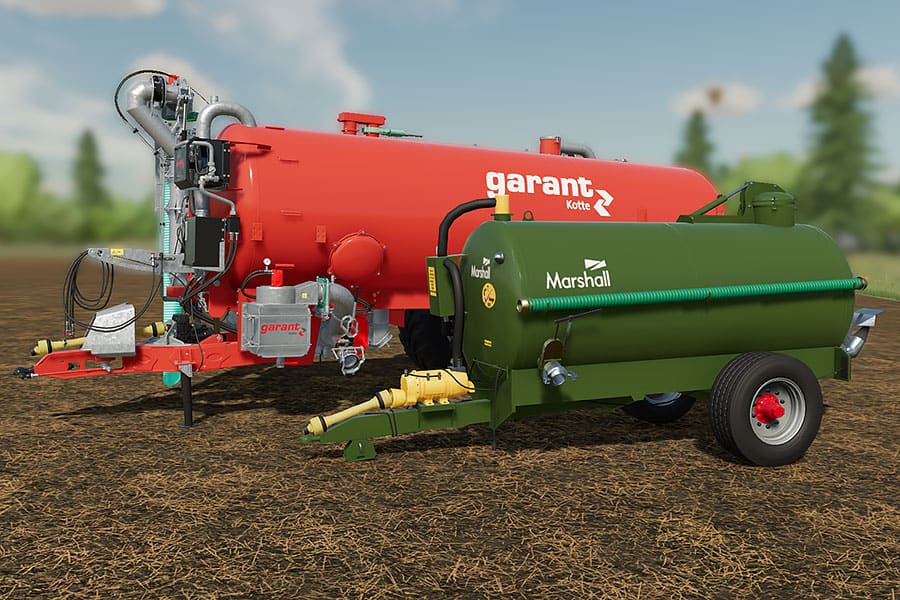