Disc harrows in Farming Simulator 22 (FS22) are generally faster than cultivators. All disks do shallow cultivation, meaning only small stones will surface.

The drawback? More weeds to get rid of.

Anyhoo… Here are some of the best FS22 Disc Harrow mods:

Do you want to cultivate your fields fast? The great John Deere 2680H high-performance disk is one of the fastest disc cultivators in the game.

The cultivating speed is an impressive 22 kilometers per hour, 14 miles per hour. You’ll cover the ground a whole lot faster with this one.

The work speed comes with an expense, though. It would be best to have quite a powerful tractor to pull it.

This John Deere disk is a modding masterpiece. The level of details is impressive, so are the added FS22 sound effects.

I especially enjoy the flexibility of the individual sections. They follow the terrain beautifully, independent of each other.

Yes, this is one of those 3-meter-wide cultivators that some players can’t stand. I’ll say the Pöttinger Terradisc 3001 mod is so well made that you should try it despite the low working width.

Not only is it a great-looking mod that works flawlessly. It’s also an affordable tool in your FS22 farm’s early days. The price is just 16,000.

Note that the Pöttinger does shallow cultivation. There are both pros and cons:

It’s also worth mentioning that the power requirement is on the lighter side. The tractors you’ve already parked in your sheds are likely strong enough.

The Amazone Catros 6002 disc harrow is one of the most versatile tools on this list. You can use it individually as a disc harrow.

The mod also includes an injector version that you can attach to many of the slurry tanker trailers in the game. If you go down this route, you’ll cultivate your fields while simultaneously adding liquid manure into the ground.

This makes it possible to do another fertilizer run immediately after the first round. That is if you don’t use the doubled application rate the first time. How awesome is that?

The Amazone disc is also one of few harrows with shop options. You can add a license plate to the rear of it. I know it’s not much, but still a nice touch.

The John Deere 2660VT mod is an exciting concept. When you download it, you get two disks:

This is how the realistic version works:

It’s a great mod. There have been various JD disks in the older FS games. None has looked as good as this. To be specific, I’m most excited about the new sound effects.

Just note that the disk tends to slide a tad to the side during unfolding and folding.

The large Horsch Joker 12 RT disc harrow is finally available in FS22. It was an essential tool in the older Farming Simulator games. However, it wasn’t chosen to be part of the new game’s starting roster.

Thankfully, Giants Software decided to add it to the game as downloadable content, or a mod, if you like.

The Horsch is one of the giant discs in the game, with a working width of 12.2 meters, 40 feet. It is made up of three sections. Each section reacts to the ground individually.

The model has several noticeable upgrades. I’m most happy with all the new sound effects.

In my opinion, the hitch is still the best feature. The drawbar has a rotating joint that allows you to make tighter turns compared to other cultivators.

Finally, we have a great-looking Degelman PRO-TILL 40 in FS22. There have been similar mods in older games, but they don’t look this amazing.

The reason it looks so good? Because it’s a repaint of the Kinze Mach Till 412 that came with the game.

There’s a good reason why the Degelman looks precisely like the Kinze disc. Back in 2018, the two companies partnered. The partnership allows Kinze to make tillage equipment based on Degelman’s models.

It’s also one of the most power-hungry tools in the game. Even 600-horsepower tractors might struggle when pulling the Degelman uphill.

All in all, the Degelman mod is a fabulous addition to the game for everyone who wants their disks to be yellow.

This is the Väderstad Carrier XL 825 disc harrow some of you might recognize from FS17.

It was first converted to FS19 and now to Farming Simulator 22 (FS22.) On its way to FS22, it has gotten updated sound effects.

I can’t help wondering why Giants Software hasn’t asked the modder to add hydraulic hoses and cables to the model.

Still, I have no problem recommending the Väderstad. With a working width of more than 8 meters, it narrows the gap between the 6-meter and 10-meter cultivators that came with the game. 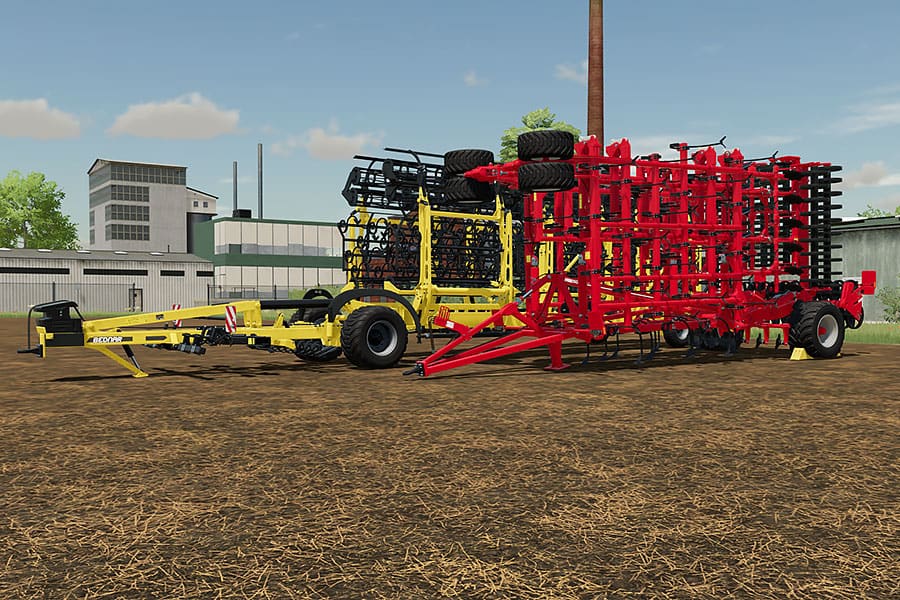