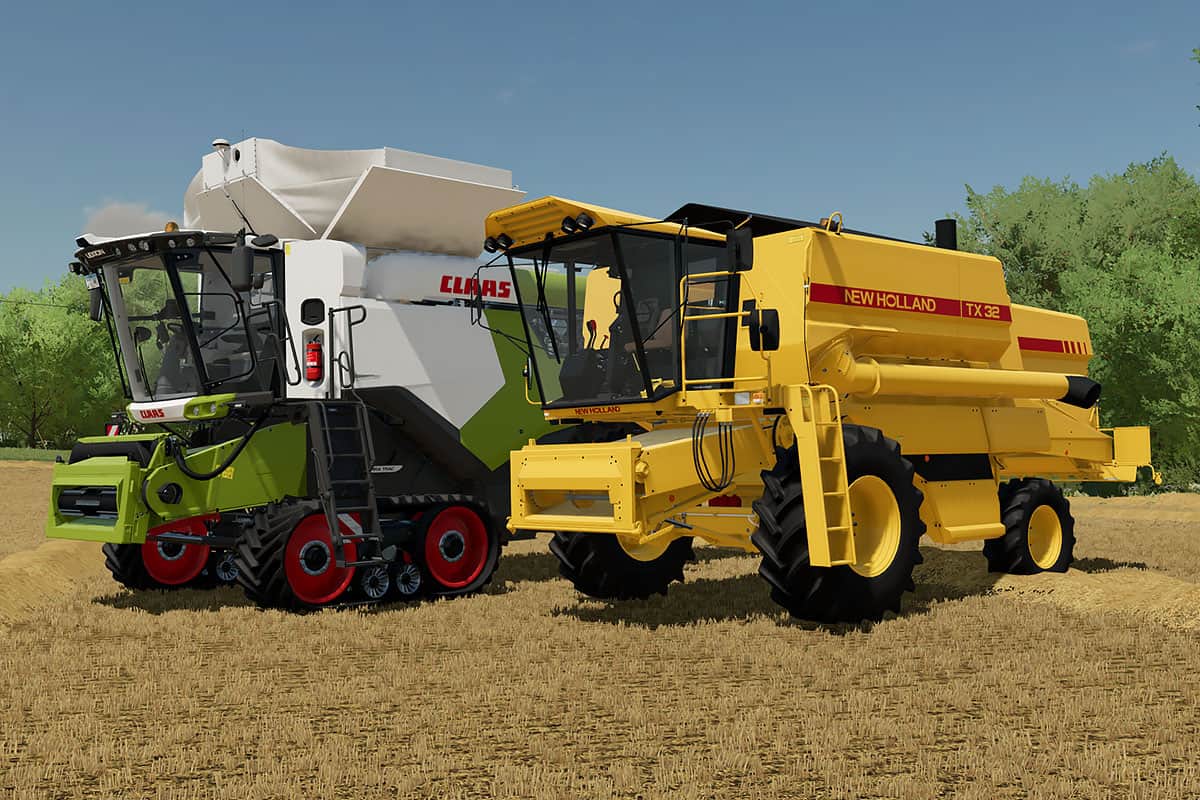 The base game lineup of combine harvesters in Farming Simulator 22 (FS22) is quite impressive. That doesn’t mean there isn’t a huge need for great mods.

Here are some of the best FS22 Combine mods you can download now.

Whoa! This is, without doubt, the best combine harvester mod in Farming Simulator 22 (FS22.) The talented modders at Custom Modding have picked apart the base game’s Case IH Axial-Flow 9250.

After putting it back together, it returns better, stronger, meaner, and better looking than ever. In fact, not only did the 9250 return, it was accompanied by the 8250 and the 7250 models.

The modders have not just added tons of new details to the harvesters, but they’ve also made sure to keep you occupied for a long time inside the shop.

The shopping menu is extensive and equally impressive:

People say less is more. In this case, I’ll say more is more.

The modded Case IH Axial-Flow 250 series also includes several new animations. You can, for example, open the side covers to get to the engine.

Oh, I almost forgot… The pack, for this is a pack, also has the Case IH 3162 TerraFlex Draper 40FT and 45FT headers. However, I prefer to use the Honey Bee AirFLEX headers, also made by Custom Modding.

All in all, FS22 harvesters don’t get better than this. Hats off to Custom Modding. I’m out of words for how impressed I am.

Here’s the most complete collection of Class Lexion combine harvesters for Farming Simulator 22 (FS22). The pack contains a model range starting at the Lexion 5300. It ends on top, with the Lexion 8900.

The models look the same throughout the range, except for the decals and the grain tanks. The hoppers on the lower end of the scale models don’t unfold as much as the larger models.

That also means that the hopper size is smaller.

One of my favorite features of this Class Lexion mod is the shop options. There is a lot of stuff you can customize:

There are, for example, no less than 6 different auger pipe lengths to choose from.

Oh, yeah. Headers. There are no headers in the pack, but you can use the FS22 base game models.

I only miss removing the warning stickers for threshing in North American fields.

This is the best modification of the vanilla John Deere X9 combine for Farming Simulator 22 (FS22.) It has a lot more features compared to the original.

For example, there are more localized features, either you’re threshing on European, American, or Canadian maps. There are even options to dress the combine in an Australian design.

Other features added by the modder includes:

My favorite addon is the 4 different grain tank choices. The largest hopper extension rockets the total grain capacity to 27,400 liters. That’s 11,200 liters more than the original.

Another cool feature is how you can configure the width of the rear axle.

The only bummer is the brake force. This X9 combine travels noticeably longer than other combines when you engage the brakes.

Note: No headers are included. However, you can, of course, use the base game’s grain and corn headers.

The King of Shop Options is back! JHHG Modding has brought the John Deere S700 series combine harvester to Farming Simulator 22 (FS22.) Few, if any, modders add so many configuration options to their mods as JHHG.

The large JD S700s are no exception. Here are just some of the stuff you can customize:

You can put one of 10 different grain tanks on your S700 combine. The hopper’s total grain capacity starts at 14,100 liters.

The largest model allows the combine to harvest 22,905 liters of grain before it needs to be unloaded.

Other than that, I also want to mention that you can buy a wider rear steering axle for the combine in the shop.

My favorite feature, besides the many hopper extensions, is the price. Only paying about 230,000 for a combine this large is a steal.

When I write this, The John Deere 50-60 STS series combines are among the most liked harvesters on the official modhub.

The reason is apparent; it’s a fantastic mod in every way.

First of all, there are all the shop options:

For example, there are 10 different hopper extensions and 12 different wheels/track configurations.

Secondly, there are all the animations and effects. Most of the parts inside the cabin are animated. There are also some spectacular interior light effects for nighttime work.

On top of everything, let’s not forget how gorgeous the model looks and how stunning the sound effects are.

Oh, I almost forgot. Another cool feature is subtle differences in how the combine looks depending on which year the model is from.

Another impressive pack of combine harvesters. Also, a trip down memory lane for the nostalgics, I’ll come back to that later.

This is the Fortschritt E516 harvester pack. It has the following ingredients:

Now, back to the nostalgia bit. Fortschritt as a company doesn’t exist anymore. It was bought by Case IH back in 1997.

Before that, it used to be the largest manufacturer of tractors, combines, foragers, and other farming machines in old East Germany.

The FS22 version of the E516 combine has some exciting options for you in the shop. You can change the colors and add more capacity to the grain tank.

There are also some wheel options available. Most notably are perhaps the metal tracks. Yes, you can get them in different colors.

The model looks outstanding. It has awe-inspiring animations. And the sound effects, which are authentic for the most, are fascinating to listen to.

The main difference between models is the amount of horsepower each combine produces.

Additionally, there are also different hopper sizes. The TC5.70 has a capacity of 5,200 liters, while the two bigger brothers gather 6,400 liters each.

The purchasing menu includes the following:

I must not forget that you also get the New Holland Varifeed 18 5.5-meter header with the combines. However, there isn’t a header trailer in the pack. It would be best if you used the base game trailers for transportation.

I like the New Holland TC5 mod a lot. It has many new details compared to other mods of the same model.

If customization freedom is essential, you should check out the John Deere S600 series mod for Farming Simulator 22.

I can’t think of any other FS22 combine harvester with so many options in the shop except for the S700 series above.

Let’s take a closer look at some of the things you can do to it:

If you’re hoping for a combine that’s customizable for several regions, I must disappoint you. This version is meant to be used in US, Canadian, South American, and Australian FS22 fields.

No, it’s no problem using it on maps from other locations, of course.

However, if you’re a fan of realistic gameplay, there is no European version of the combine, unfortunately. The mod has all the markings of an American thoroughbred combine.

Having this many hopper extensions is fantastic. I’m also impressed with all the things going on with the in-cab monitors.

You can, for example, see the hopper’s fill level and how many hectares you’ve harvested.

This is the best John Deere T-Series combine harvester mod for Farming Simulator 22.

There are two things about this mod that impress me:

The most extended pipe comes in two versions, as well. One static and one with a foldable end piece.

If you download this mod, you also get two extra headers:

All in all, if you’re looking for a complete JD T-series pack for FS22, this is it.

Do you want a full-fledged American and Canadian version of the Claas Lexion 8000-series combine? Then this is your best option. And yes, it’s also possible to dress it up in a typical EU design.

If you choose the US and Canada localization option, the (in)famous EU warning decals disappear. Instead, the harvester gets the correct flashers and the red and orange warning triangle.

There are other buying choices too, such as:

The wheel and tracks options are what I like the most. For example, this mod is one of few Lexions with options for twin wheels on the front axle.

The mod also has fantastic and exclusive animations:

I think the Lexion mod is a perfect example of how beautiful the synergy between Giants Software (GS) and modders can be. GS brings great models to the table. Modders make them even better.

Here’s a video where we’re using two of the Lexions for wheat harvest:

Were you one of many that loved the Claas Tucano 580 in Farming Simulator 19? So was I. The combine was one of many gems in the Claas Platinum Expansion, released in October 2019.

That’s why Christmas came early in 2020 when Giants Software decided to release the combine as an FS22 mod a couple of days ahead of Christmas eve.

It was a great relief to enter the Tucano finally. I spent weeks after the game’s release wondering if we would ever see it again.

It’s not only the combine you’ll get when you download the Tucano 580.

The only thing missing is a corn header. You can, of course, use the vanilla game’s Corio 875 FC.

Except for some wheel options, there isn’t much you can configure. To me, it doesn’t matter. The Class combine looks terrific, and it sounds so good!

Finally, you can harvest your Farming Simulator 22 (FS22) crops with the largest New Holland combine harvester. The modder Tarczi007 has converted the FS19 version and made it available for all players in FS22.

Not only is the combine converted, so are 3 headers:

There aren’t too many shop options, unfortunately. You can customize the license plates, and that’s about it. However, it’s excellent to start threshing with the CR 10.90 again finally.

This mod greatly expands the base FS22’s Deutz Fahr Topliner combine. Are you a fan of as many customization options as possible? Then this one might be what you’re looking for.

The color picker includes several shades of green, a couple of red colors, and black.

The magnificent Rostselmash RSM 161 was unfortunately left out when Giants Software decided which combines to include with FS22. That’s why I salute ZeKi Modding for bringing it back to the new game.

Best of all, not only do you get the combine harvester. You also get the DS 900 9-meter header. Yes, the header still has the integrated header trailer.

What I like most about the mod is the header’s work speed. It makes it possible to harvest crops at a speed of 12 kilometers per hour at most.

It might not sound like much, but that extra 2 kph means a lot when you have many fields to harvest.

There are not many shop options for the large Rostselmash. Still, it’s great to have it back in FS22. It’s a great machine, especially in medium-sized fields.

My favorite feature? The sound. It has the most fantastic engine sounds.

A lot of players loved the Claas Dominator combine in FS19. Luckily, Giants Software quickly included it as a mod for Farming Simulator 22 (FS22.)

The Claas Dominator is the perfect harvester for small FS22 farms. Sure, there are much larger options, but they might be challenging to maneuver in small fields.

The Dominator, however, is a perfect fit.

Here’s what you can do to it inside the shop:

The beautiful New Holland TX 32 has learned thousands, if not millions, of Farming Simulator (FS) players how to operate a combine harvester. It was the starting harvester on the Ravenport map and the Felsbrunn map in FS19.

In FS22, however, it wasn’t qualified for the starting lineup. Instead, it was benched for a couple of days until Giants Software decided to let it enter the fields as a mod.

First, it’s great to see the TX 32 ready for FS 22 harvests. Secondly, and perhaps more important, it sounds a lot better now. The engine sounds and other effects are, hands down, brilliant!