Need an excellent trailer for Farming Simulator 22? FS22 trailer mods come in many shapes and sizes. Here, I’ve collected what I think are the best trailer mods for the game so far and their download links.

The Reisch Pack by VertexDezign is undoubtedly one of the best trailer mods ever created for a farming simulator game. The FS22 version contains no less than three different trailer models:

The Reisch RT 160 is exceptionally versatile. You can use it as an ordinary trailer or transform it into a bale trailer or a trailer for animal transport.

The RT 160 also has a fixed drawbar option, which is handy for everyone not keen on reversing turntable trailers, like the RD 180 and RD 240.

One of the features I enjoy the most is the option to hook one trailer to another. Boy, I feel like a boss every time I get to drive grain trains like this.

The LSFM Universal tank pack for FS22 is so much more than just a trailer. And it’s one of the best mods ever to hit Farming Simulator mods folders.

There are 12 different pieces of equipment in this pack. Most are tanks in various sizes that will satisfy most liquid storage and transportation needs. The collection also includes trucks, an ITRunner platform, and a unique tool for handling one of the tanks with telehandlers.

Perhaps the thing I like the most about the pack is the semi-trailer. You can customize it to transport either liquids or solids inside the shop. Yes, for instance, it can be filled with wheat or seeds, for that matter.

I’ve written an in-depth presentation and guide for the mod, so for now, here are a few facts:

Another brilliant FS22 trailer mod by VertexDezign. Sure, the Strautmann SZK 802 isn’t the largest trailer out there, but it packs a punch when it comes to features.

It has several capacity configurations. They start at 4,000 liters and stop at a good 12,000 liters. And, yes, you can attach one trailer to another, allowing for impressive road trains.

One of my favorite features is the option to remove all walls except the one at the front. This makes the trailer handy for transporting both bales and pallets.

Be sure to brush up on your reversing skills, though. The trailer has a turntable, which makes it a bit harder to operate when going backward.

On the other hand, few things are more satisfying than making a perfect reverse drive with trailers like these once you get the hang of it.

The Fortuna FTM200 trailer was one of our favorites on European maps in Farming Simulator 19. Thanks to the great people over at Forbidden Mods, we can now enjoy it in FS22 too.

It’s one of the more extensive trailer mods available for FS22; it has a loading capacity of 44,500 liters. It looks both massive and impressive in the game.

The Fortuna FTM200/7.5 trailer has also gotten all the essential sound upgrades. Just wait until you hear the massive clonk! when it gets back to its original position.

This is one of the trailers Giants Software didn’t put in FS22. It has been with us both in FS17 and FS19, but it’s not included with the new game.

Thankfully the modder Bubber Drumm has converted it for us.

One of the key benefits of the Kröger is that it is a push-off trailer. The body won’t raise. Instead, the front wall pushes the load off the trailer. This makes it perfect for unloading stuff inside buildings where other trailers might collide with the roof.

The Kröger TAW 30 makes some delicious sound during unloading. The total capacity is 45,000 liters. There are also shop options for the wheels and license plates, but not colors.

The FS22 ITRunner pack is now available for players on PCs and Macs. It’s a gladly received addition to the game, with its ITR 26.33 HD chassis and seven roll-on modules.

The modules include grain and forage boxes, two flatbeds, and slurry and manure spreaders.

If you’ve never used the ITRunner pack, I’ve written a short guide for it.

The pack makes a remarkable comeback in FS22, although I miss some of the FS19 features. Currently, you can’t change the colors of the modules, for example.

The Strautmann SEK 802 Special mod for FS22 is another take on the popular Strautmann small capacity trailers. Farmer_Andy has made this version.

It’s the wooden sidewalls that separate this mod from similar mods. It gives the trailer a rustic DIY look I know some digital farmers like.

Besides using the trailer for transporting cereal and other goods, you can also use it for pallets and bales transport. You can customize it into a platform version with working ratchet straps (tension belts.)

It’s also possible to add walls to the platform version, but I couldn’t unfold them during testing.

Unfortunately, the platform versions did produce an error in the log: SEK802.xml’ has invalid fillTypeCategory ‘SQUAREBALE’.

Here’s the Joskin Trans-Space 8000 trailer that Giants ‘forgot’ to put in FS22. It was a base game trailer in FS19.

Now, thanks to the modder Th3_Ghostrider, you can attach it to your tractor in the new game too.

Th3_Ghostrider has done a terrific job converting the trailer. It looks great, and it has most of the sounds trailers in FS22 make, except for when the rear door closes.

Hoses and cables work as you would expect. Note that it’s a tipping trailer, meaning you need plenty of headroom during offloading.

This is a modified version of the base game Fliegl ASW 271 trailer. The modder, Flotschow, has added wooden boards to the sides of the trailer.

This increases the load capacity by 4,500 liters or 5,000 liters, depending on whether you use the trailer for spreading manure or material handling. Note that the max allowed weight is still 12.5 tons.

The modded Fliegl also has more marker lights than the base game version, both on the sides and to the rear.

It’s a good mod, with no errors. It would have been even better if you could remove the wooden boards, though.

The Fortuna K270 is capable of transporting up to 30,000 liters of goods. It has four tipping options:

It might not look as impressive as many of the trailers above, but the audio is flawless, and the dynamic hoses add plenty to realism.

Perhaps the best thing about the Fortuna K270 is that you can lock the drawbar. Because it’s a turntable trailer, locking the drawbar makes reversing it a lot less stressful.

Having said that, once you master backing up turntable trailers in FS22, you won’t look back (well, you should, but you know what I mean…) And you certainly won’t need to lock the drawbar. 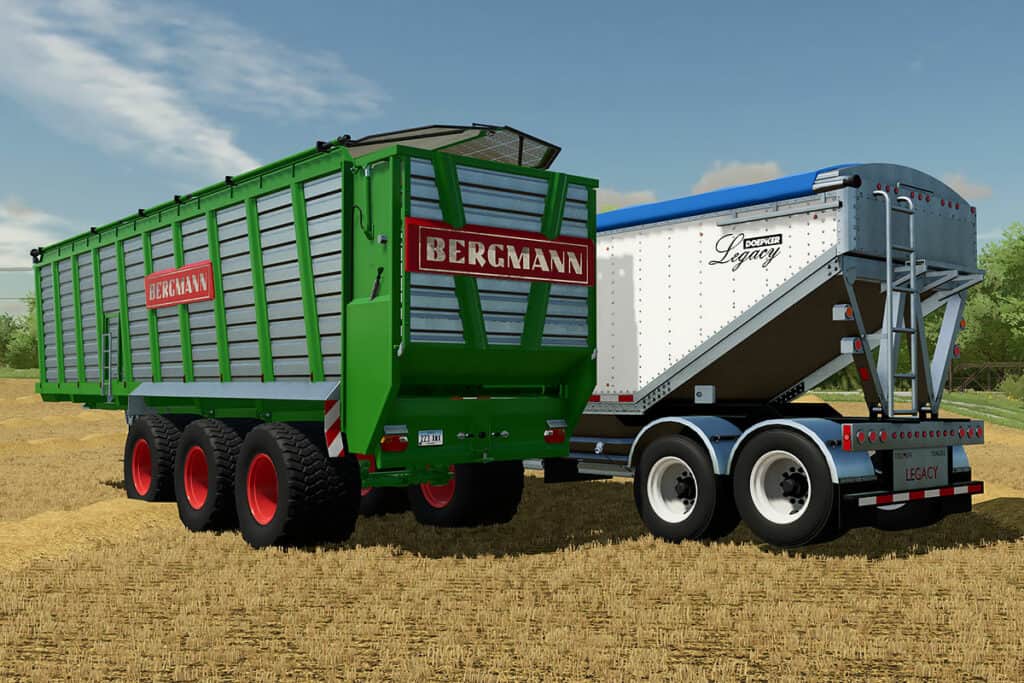 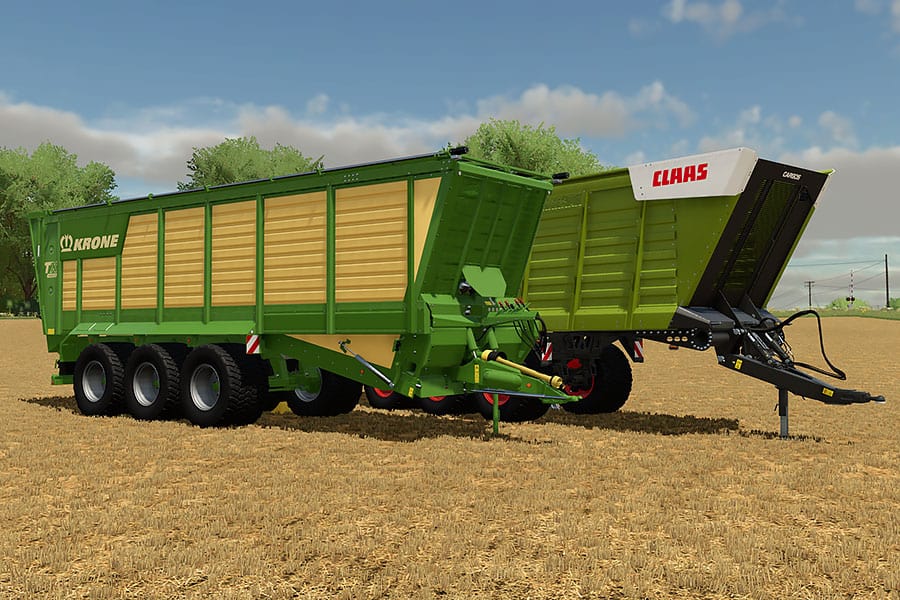