Are you looking for incredible tractors that work in Farming Simulator 22? This page tells which FS22 Tractor mods I think are the best.

I’ve not considered categories, like small, medium, and large tractors, to make it simple. You’ll find tractors of all shapes and sizes here.

Right now, the Case IH AFS Connect Steiger by KarlFarms is the best tractor mod for Farming Simulator 22, no matter the category. FS22 tractor mods can’t get much better than this.

The mod expands the base game’s Case IH Steiger tractor in all ways imaginable. You don’t get just one, but two different tractors:

The main difference is this:

The Rowtrac version has several options for belt tracks on both axles:

The narrow frame version uses wheels and lots of them:

KarlFarms has always added tons of optional features to his mods. The FS22 Steiger tractors are no exemption.

If you enjoy personalizing your vehicles and tools, you’ll love all the customization options:

Several animations have sound effects, like opening and shutting the door.

It’s honestly difficult to find words that describe how good this mod is. Brilliant, impressive, astonishing… Yes, it’s all that, and then some. My advice? Treat yourself, try it yourself. I promise you won’t regret it.

This John Deere 8030 Series tractors mod is a conversion of the highly popular FS19 mod. It’s the modder himself that has made the conversion. Everything works without errors.

The JD 8030 series mod is one of the most feature-rich tractors in FS22. There are so many options for you to customize in the shop:

One of the best customization features is how you can locally adapt the 8030s. There are design options for the EU, Australia, the USA, and Canada.

I’m very impressed with how good the tractor looks. The sounds are fantastic too, but I don’t believe they are the original 8030 engines sounds.

SiiD Modding, one of the most talented FS modders, has added most of the missing pieces to the base game’s large John Deere tractors.

The result is a powerful pack of green machines:

In my opinion, the best expansion is the localization options. You can dress all JDs in a US/Canadian, Australian, or European outfit.

Those options include oversize signs for the Aussie version and North American flashers that look like the real thing.

As with other mods from SiiD Modding, the pack of large John Deeres has lots of configuration options. Here are just some of them:

This pack of John Deere tractors is another win for SiiD. It’s an impressive package he has put together, expanding on the features and options of the models that already exist in the game.

The tractors don’t have extra animations, though. You can’t, for instance, open the doors.

The FS22 Fendt 700 Vario and Fendt 800 Vario tractor mods are some of the really few tractor models that Giants Software didn’t originally create.

That doesn’t mean it’s a new model. I believe it has been part of the franchise as a mod since FS15, at least.

The good thing is that the Fendts have received many updates over the years. The 2021 versions look crisper and better than ever.

And the motor sounds! I’m so glad the modder has taken time to make full use of the new FS22 sound engine—both the 700 Vario and the 800 Vario sound perfect.

I also like the looks of the LED lights on these Fendts; they look very realistic.

This is a true FS22 mod, meaning it’s a modification of an existing vehicle in the game. The modded Massey Ferguson (MF) S8 has been modified to have a lot more features than the base game version.

All the modder’s work has resulted in a feature-rich MF that I know a lot of players will enjoy:

The most important difference, however, is the animations. You can open the left door, the rear window, and the sunroof on the modded version.

And that’s not all. The steering column will fold accordingly whenever you enter or leave the Massey.

Some will maybe argue that Giants Software should include all these features themselves. I’ll say I’m happy that Giants allow modders to work on their models, especially when it’s this good.

I just hope Giants finds a solution for adjusting the engine sounds when you’re inside the cab and open doors and windows. Right now, there is no hearable difference between opening a door and closing it, for example. The audio stays the same.

This is another modification of an existing FS22 tractor. Once again, the modified version brings a lot more to the table than the model Giants put out.

Here are some of the new features:

More Options in the Shop

This version of the large Fendt tractor adds more customization options too. You can, for example, play around with the placements of the beacon lights.

There are several color options for both the body and the rims.

And, of course, more wheel-changing options. This Fendt has more configurations to pick from.

The feature I like the most is how the warning signs fold. I’ve never seen this animation looking this good. It’s also cool that the hand throttle is animated.

This is one of the ‘forgotten models’ of FS22. The Deutz-Fahr 9 series tractors were popular among many players in FS19. Still, Giants Software didn’t make room for it in the lineup of FS22 base game tractors.

That’s why I’m happy that the modder that calls himself RedCat3D has taken on the task of converting this magnificent machine. FS22 wouldn’t be complete without it.

It’s not a quick and dirty convert. The FS22 Deutz-Fahr 9 series mod has all the right textures, not to forget a crucial sound update. Its engine roars more powerful than ever.

The shop options include several wheel configurations, four engine options, and color and design options. The latter include the famous Warrior design.

The FS22 Valtra S Series mod is another ‘forgotten model’ that has gotten a second chance in the new game. It was part of the FS19 base game garage but has been seen nowhere in FS22 until now.

Bubber Drumm to the rescue again. The modder has done a great job converting the large Valtra to meet the standards of the new game.

Again, it’s the engine audio that gets to me. Sure the model looks spectacular like it did in FS19. Paired with the sound updates for FS22, it’s one heck of a ride.

Inside the shop, you can buy a lot of different wheel setups from all FS22 wheel manufacturers. There are also color pickers for the body and the rims. You have a total of six various engines to choose from.

Let’s play a game. Can you name one red-colored tractor that’s missing from the base game’s lineup of large tractors?

If you said Massey Ferguson (MF) 8700, pat yourself on the shoulder. That’s the one I was thinking of.

Luckily, it isn’t missed any longer. It has shown up in the Downloadable Content section as a mod.

Not only is the MF back. It’s represented by the S-model, a more exclusive and luxurious version of the massive tractor.

The mod adds 6 different S-models to FS22. The engine options start at 300 horsepower and end on 405 horsepower.

Inside the shop, you can change the wheels. There are many configurations to choose from. In my opinion, the best feature is the overhauled engine sounds. The updated 8700 S series sounds impressive.

The left door and the rear window are openable. The animations are controller- and mouse-controlled.

This was one of my absolute favorite tractors in FS19. Can you imagine my disappointment when I couldn’t find it in the FS22 base game garage? Luckily, I didn’t have to wait long for it.

About a week after the new game’s release, the modder Chefkoch gave the community of players his conversion of the great Optum tractor.

I think it looks even better than what it used to in FS19. And the sounds! It’s perfectly adapted to the new FS22 sound system, although I’m not 100 % sure it’s the authentic Optum-sounds we’re hearing.

There aren’t too many shop options for this Case tractor. However, the available options include a lot of setups for the beacon lights, like two different beacon bars mounted on the roof.

The tiny Valtra A series tractors were a great addition to the FS19 base game garage. I know several players that were disappointed to see it disappear from the FS22 lineup.

Thanks to the modder Thierry Gamer they don’t feel let down anymore. There’s now an excellent A series conversion available for the new game.

What I like most about the FS22 version of the Valtra A series are the many options in the shop.

You can also add weight brackets to the front of the Valtra. Several front loader mounts are available too.

Here you have the extended version of the base game’s Massey Ferguson 3670 tractor. It adds both the 3680 and 3690 engine models to the game.

On top of that, you also get the Landini 19500 model when you download and install this mod. Why? Because, back in 1959, Massey Ferguson bought Landini.

As a result, some Massey models were built at the Landini plant in Italy. Some Landini models were made at the Massey Ferguson plant in France. Also, the same tractor models could both have a Massey and Landini dress.

I think it’s cool that the mod adds more 3600 models to the game. It’s even more remarkable that we also get the rarer Landini 19500.

The HoT online Team has made sure that we can enjoy the gigantic Challenger MT 900 articulated tractor in FS22.

The reason it isn’t a base game model?

It might have to do with AGCO (parent company of Challenger and Fendt), seemingly choosing Fendt as the tip of the spear in the battle against John Deere for North American market shares.

Several Challenger models have been dressed up in Fendt colors and logos during the last years.

Anyhow, let’s take a closer look at this FS22 Challenger mod, shall we?

The MT 900 mod isn’t particularly feature-rich. However, if fanciful color choices are your thing, this mod is for you. Other than that, there are four Trelleborg wheel options (singles, singles with weights, twins, and triplets.)

I’m particularly happy about the sounds of this mod. The engine audio is impressive, and I enjoy the audible difference from the outdoor view to the cab view.

I noticed that the seat and interior parts create sounds too, for example, when you drive the tractor on rough terrain—a really nice feature.

The only things I’m not enthusiastic about are that the dashboard’s digits are hard to read and that the tractor has an unrealistic max speed of 75 kilometers per hour.

I would also have rated the tractor higher if it wasn’t for the fact that the modder has used too many color options for it. Too bad some modders don’t check their mods before releasing them; it’s an easy error to spot. 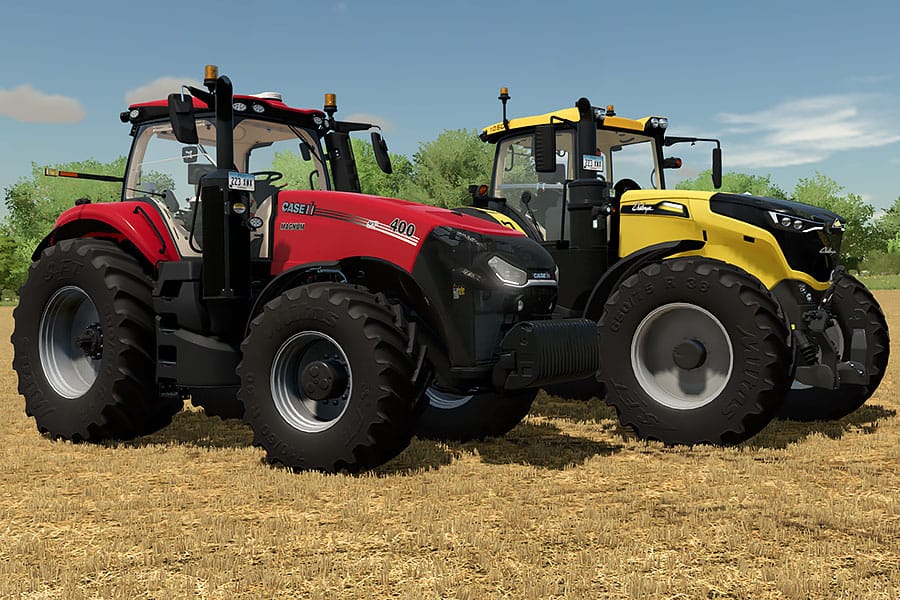 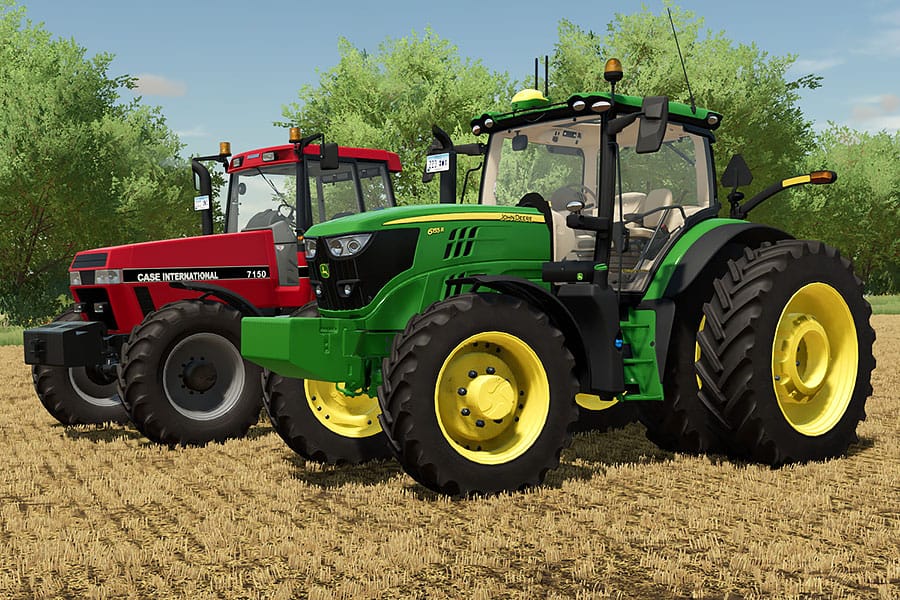 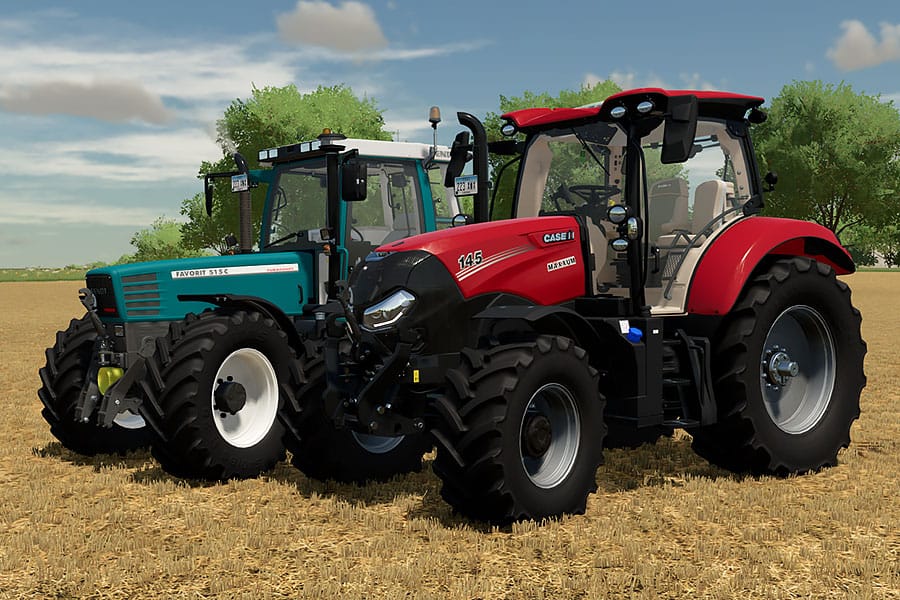