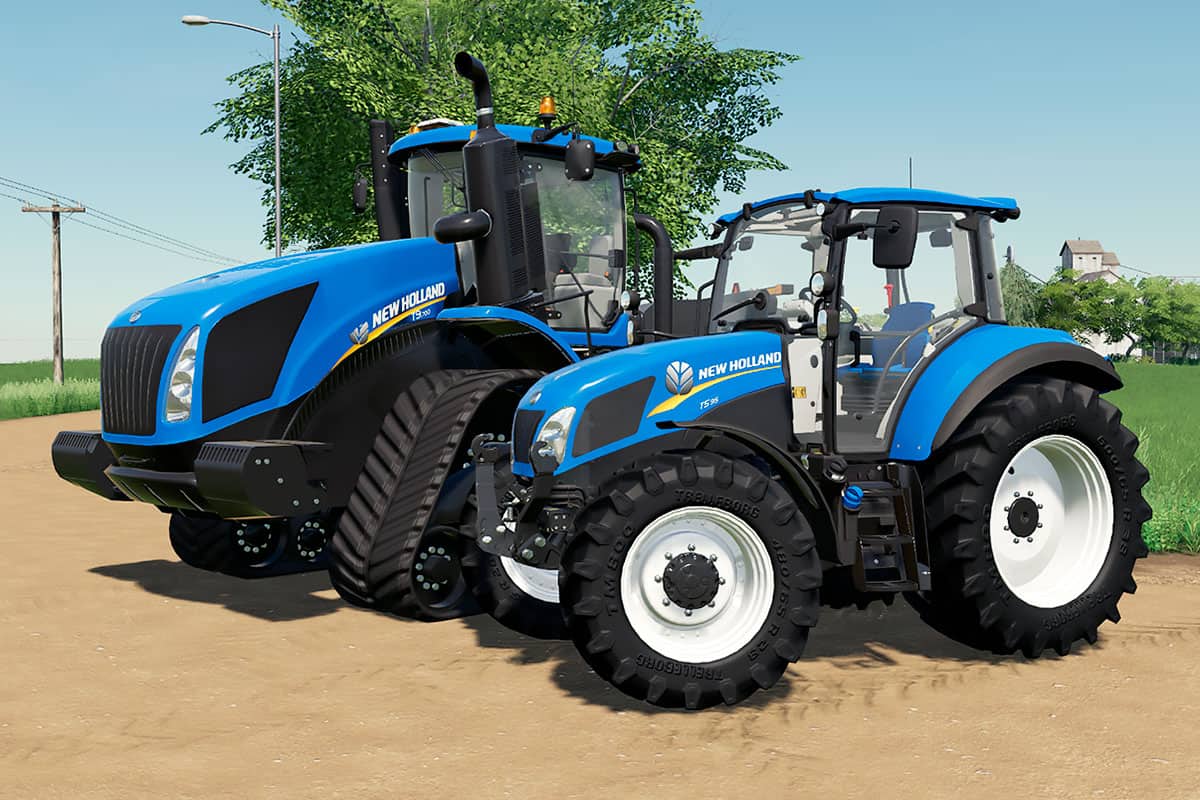 During a multiplayer session, we argued what the best Farming Simulator 19 (FS19) New Holland tractor mod is. The discussion was lively, but we managed to agree on a list of 15 prime examples. Here, we share what we agreed on with you:

This is one of the best-liked New Holland tractor mods on the official modhub. One of the reasons it’s getting so much praise might be the custom sounds that follow it. It sounds brilliant. It also has many customization options, making it possible to make a highly personalized version of it.

The mod has animated doors and fantastic textures (just take a look at the mesh on the hood.)

The Brazilian farming industry is so big that New Hollands builds vehicles and equipment specially designed for that market. That’s 90 % true. Brazilian ‘designed’ New Holland gear also finds its way to other countries in Latin America.

The truth is still that the Brazilian market is essential for New Holland. The company has three factories down there. One is located in Curitiba. It’s at this plant the Latin American version of the T8 is made. Now, a fantastic version of it is available in FS19 too.

There are actually two New Holland T7 tractors inside this mod: The SWB (short-wheelbase) and the LWB (long-wheelbase.) As you probably have guessed, the LWB is slightly larger than the SWB. The power range is also different. The SWB starts at 165 HP and ends at 225 horsepower, while the LWB’s range spans from 195 to 270 horsepower.

Other than that, this mod shares many of the shop customization options with most other T7s on this list.

Yes, it’s another T7. But this AC (Auto Command) version has some exclusive design options in the shop, like more choices for which version of the New Holland logo to put on the hood.

This version also has one of the most powerful engine options: You can max it out at 310 horsepower when you pick the most expensive engine for your T7.

This is a great edit of the original T6 that Giants Software made for FS19. The modded version has a lot more variety with regards to customization options. One awe-inspiring feature is that you can pick one of six design lines for it, including a Blue Power version and the Special Heritage design.

The tractor has also been rescaled to match other Case/New Holland (CNH) models in the game, like the Case Maxxum and the Steyr Profi CVT.

Here’s a gorgeous farm tractor with many color options. The mod is a further development of the base game’s NH T5. With this mod, you get a lot more to customize, like colors and wheels.

It has more animations, as well. You can open the left door and both the rear and front window. Cool!

This is another base game model update. The mod has more to offer inside the shop, like tracks instead of wheels on both axles.

This version has more animations than the original; doors and windows can be opened with a controller or a mouse. The indoor camera is programmed to follow the seat movements, giving you a more realistic driving experience.

8. New Holland T8 US and Canada

Here’s another T8, this time aimed at digital farmers in North America. The mod adds a distinct US and Canadian look to the tractor. Especially the wheel configurations are something you first and foremost will see on North American soil.

This mod, too, has several extra animations, for example, the flashers, which are foldable.

The TS tractors are iconic workhorses, still in use on many farms all over the world. The FS19 version is a brilliant tribute to some of New Hollands’ most memorable models.

The FS19 version has a lot more going on. The shop options are far more than what it was back in 2014. The new version does also include more animations. Doors, windows, and the sunshade can now be controlled by the player.

Here you have the most powerful New Holland tractor in the game. It’s an Americanized version of the massive T9 articulated tractor. With 620 horsepower at the most, it’ll pull almost anything you attach to it.

It comes with some really cool options inside the shop, like different frame sizes.

The last T7 mod on this list is also the most powerful. No other T7s have the horsepower to match this one. That’s also why it’s the only T7 mod that you’ll find in the Large Tractors category in FS19.

Following the success of the TS Series, New Holland launched the TM Series tractors in 2000. The TM tractors are considered one of the best tractors ever made.

The FS19 versions are excellent too. This mod will be a fabulous addition to any farm in the game.

This Series of tractors used to carry the Ford logo initially. It was eventually phased out for the New Holland logo’s benefit because Fiat bought what used to be Ford New Holland in 1991. From 1996, all 40 Series tractors were adorned with New Holland logos on the sides and the Fiatagri leaf on the front.

The FS19 version of the 40 series tractors is perfect for anyone who wants a piece of important tractor history on their digital farm.

The FS19 version is both rare and exceptional. It’s the only TG mod we’re aware of. Luckily, it’s freaking awesome. It has excellent shop options and cool animations. Even parts of the engine are animated.