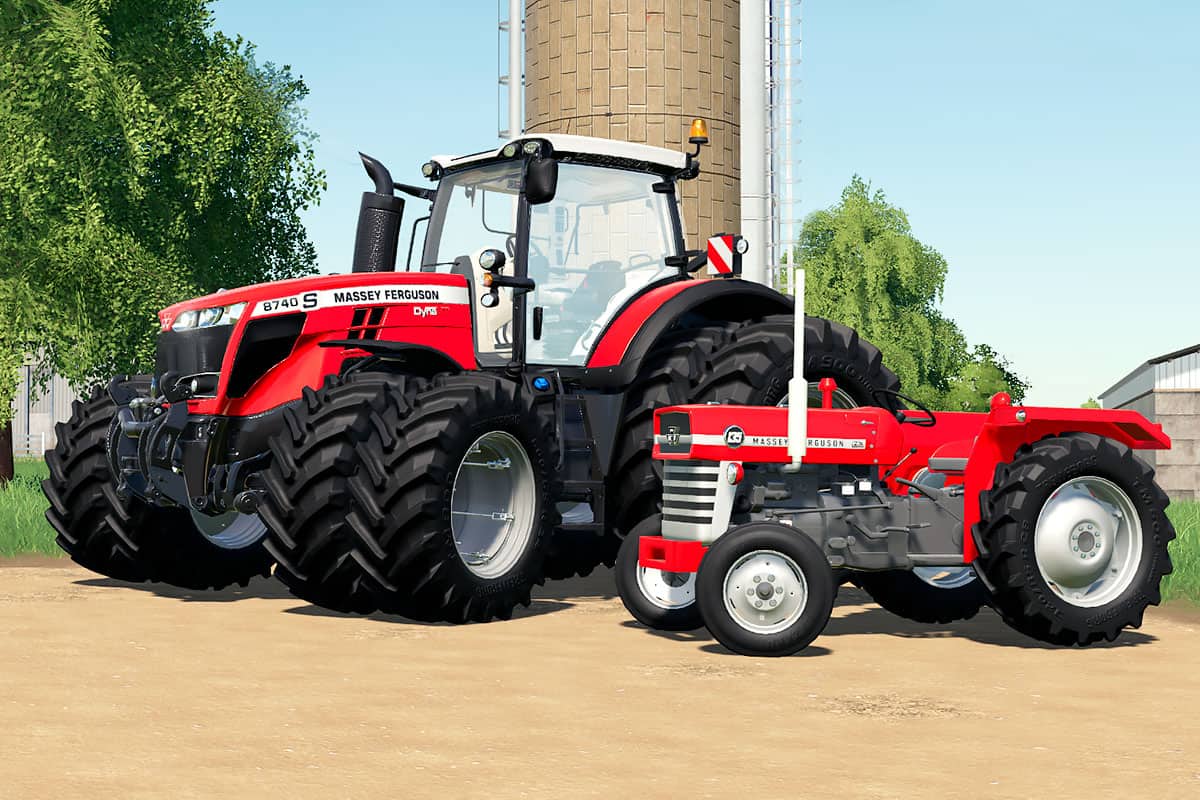 Need a robust, medium-sized tractor? Here’s a really cool option: The Massey Ferguson 7600. This version is an edit of the original 7700 that Giants put in the game. The 7600 is a bit smaller than its descendant. It doesn’t produce as much power, but it’s way cheaper.

The 7700 is actually based on the 7600 series. Both models have won several prestigious awards; the 7600, for example, received the Machine of the Year Award at the Agritechnica Show back in 2012.

Did you know that Brazil is one of the largest agricultural producing countries in the world? It’s the number one producer of soybeans and sugar cane and the second-largest producer of corn. It’s no wonder that a lot of tractors and farming equipment are tailor-made for Brazilian farmers.

Massey Ferguson’s 7400 series was released to the world in 2004 to replace the successful 7200 program. The FS19 version includes most of the early models, plus the 7499 Dyna-VT that joined the lineup in 2009.

The 7400 series was among the first Massey Ferguson tractors to incorporate the Dyna VT transmission. The FS19 version reflects this as all engine options include this variable transmission system. With a top speed of 50 kilometers per hour and a maximum of 240 horsepower, you get a tractor that does really well on medium-sized and large farms.

The MF 6600 series, introduced in 2013, is another award-winning tractor range. It won the silver medal at the IMMA awards in 2014.

The FS19 version is a down-scaled version of the MF 7700 tractors. Yes, it’s smaller, also when it comes to output power – 185 horsepower at the most. But it offers more features, plus more animations. You can, for example, open the rear window and the left door, and the hand throttle moves in synch with the acceleration.

Here you have a better version of the base game 8700 range. The mod incorporates the ‘S-Effect,’ Massey Ferguson’s premium upgrades program to all models built at the AGCO Beauvais factory in France. The ‘S-Effect’ means more of everything. More power, exclusive hood designs, different lights, and better comfort are distinctive features that set the S-models apart from standard versions.

This FS19 version includes many of the S-features. It looks different compared to the original 8700 model it’s based on. It also has a slightly more powerful engine.

Here’s a tremendous FS19 version of one of the most popular tractors in history. Massey Ferguson made several hundred thousand of the 135 on its factories in Detroit, USA, and Coventry, UK. A lot of today’s farmers learned how to operate tractors by driving 135s as children.

The Massey Ferguson 135 is still in high demand with collectors but also farmers in developing countries due to its simple mechanical construction. The FS19 version has a lot of charisma and cool features like dual rear wheels and different setups of the headlights.

Massey Ferguson’s 5600 tractor range is perfect for livestock operations, dairy farms, grass, and hay operations. Sure, it’ll also do a great job in nearly all kinds of all-round-fieldwork.

This mod is an edit of Giants’ original 5600 Series model. The modded version has more features compared to the original. It also dabbles into the 5700 range. Most of the available engine models are 57XX with the ‘S-Effect.’ You can also choose between the Dyna 4 and Dyna 6 variable transmissions.

This is pretty much the same mod as the MF 5600 above. It has many of the same features but lacks the option to add the deco stuff, like the fire extinguisher and the hand tools. On top of that, it does cost a lot more. The base price is 40,000 higher than the 5600.

Still, it’s a great mod. It offers much more than Giants’ original model with regards to customization.

Here’s another Massey Ferguson with the ‘S-Effect,’ based on a Giants Software model. This is particularly visible inside the cab and on the tractor’s front. Several parts of the S-version’s interior have different colors. At the same time, the light setup and hood design differ significantly between the two versions.

Another difference is the customization option. The modded S-version has a lot more to offer when it comes to colors (both for the interior and the outside), wheels, and engine options.

Massey Ferguson introduced the world to its 8100 Series tractors in 1995. The range had six different models, the 8140 being the medium-sized alternatives. The 8140 was built at the Massey Ferguson factory in France.

Initially, you could get the 8100 series with either a 2WD or a 4WD chassis. The FS19 version has just one option: the 4WD version. You’ll find some shop options for it, but you can’t get other models like the 8130 or the 8150, for example. It really doesn’t matter. The one version you get looks so good it’s more than enough.